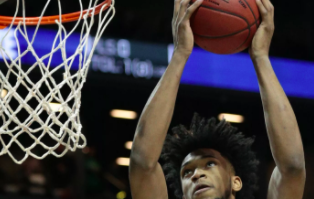 Marvin Bagley hit eight straight shots starting at the 15 minute mark of the second half. That was just a honed-in version of his entire night. Inside, intermediate range, on the wings, Notre Dame had no hope of stopping him.

To cap his bucket stretch, Grayson Allen tossed him a lob into the post, in heavy traffic he tipped the ball off his fingertips trying to grab it. He lost the ball, but it fell in the best place it could have, the basket.

A red-hot shooting night by Grayson Allen, bolstering his ACC player-of-the-year teammate with lobs, solidified an overwhelming effort even with Wendell Carter quiet.

“Carter has got an injury problem with his foot that he didn’t practice this week,” Duke head coach Mike Krzyzewski said. “He played gingerly tonight, and we’ll see about tomorrow.”

Notre Dame ate Duke’s kitchen sink and more in the opening minutes of their quarterfinal matchup in Brooklyn.

One day after they fell behind by 21 then came back, Mike Brey’s team watched Wendell Carter toss a lob in to Marvin Bagley on the first set of the game for an easy layup. Then he caught a lob from Grayson Allen. Then he drilled a three. On the left wing, Allen spotted up and hit his own three, burying the Irish 12-5 early.

“They’re just such an explosive offensive unit,” Brey said. “Tonight we had no answers. Overall I kind of liked our offensive rhythm, but we just couldn’t get enough stops.”

Notre Dame needed production from Bonzie Colson, who missed two early shots through this sequence, and John Mooney who’d battle inside hard against Duke’s front line and secure three hard rebounds. Colson wrapped up six in the first half.

Securing possessions kept them afloat, as Bagley soared inside for another layup to make 16-12. Rex Plfueger hit a three, and Matt Farrell ran a set low to T.J. Gibbs running baseline to find Colson cutting for two.

“He’s a great player in this conference,” Bagley said of Colson. “He does a lot of great things on offense. Being able to score, his moves in the post.”

He added that playing Colson, in part, has influenced how he approaches playing.

Then Allen nailed a three, Farrell responded with his own, then Allen hit another, and another. In the first 10 minutes, Allen poured five consecutive threes on Notre Dame.

Gary Trent got his on the left wing, hitting a deep two extending the Blue Devils’ lead to 37-31. But Colson, blew up a possession with a big steal at half court and charged on the fast break to earn two free throws. He’d match Bagley with 10 first-half points.

Mooney got to the line as well, and flushed a driving dunk right before the buzzer sounded. For all the offense they swallowed, they only trailed by four entering halftime.

Bagley and Colson carried their duel into the second, trading five consecutive layups back and forth. Bagley got the last of the stretch, and Colson’s steal in the half court only led to a Farrell miss from three.

On the other end, Carter dunked inside to put Duke up eight and Trevon Duval pushed the run to 6-0 stealing the ball from Farrell and running for a slam. Out of timeout he added a floater to make it eight.

“My teammates did a great job of hitting me on a seal,” Bagley said. “When I was posting, but they weren’t falling. Second half, we just had to have a short memory, move on to the next play, and don’t worry about anything that happened in the first half.”

Notre Dame continued to grapple with Bagley and others tipping missed shots back into play around the rim. Bagley drilled a three and hit an inside look to get up to 23 points with 12 minutes remaining, but the Irish scored six through the stretch to stay within 12.

But Bagley scorched on. A driving two and jumper on the left wing added four points to Duke’s lead, as Colson responded to one but not the other in the paint.

“They rebound at a level above the rim that I haven’t seen in college basketball,” Brey said. “I don’t remember some of the rebounds above the rim like that with their size and their athletic ability. It was interesting to be floor level and see how they explode off the court.”

Duke would momentarily cross the 20-point plateau but the Irish kept scoring, a Farrell three got them within 14. Bagley, following an apparent injury to his finger, put his head down in the post again, created contact into his man to get enough space inside to finish off glass.

He started 14-of-22 from the field and finished with 33 points and 17 rebounds to send the Blue Devils on to day two.

They’ll move on to face North Carolina, tipping at 9 p.m, feeling good about their defense that’s developed through the year. Krzyzewski endorsed Notre Dame as a tournament team, as they face a highly-uncertain Selection Sunday.

“When you start a book, do you already know the ending?” he asked. “It’s really different when you have all the freshmen that we have. And so part of it is getting to know them, not just individually but how collectively they make each other better. You know, we found that zone was better for us like the second week of February.”