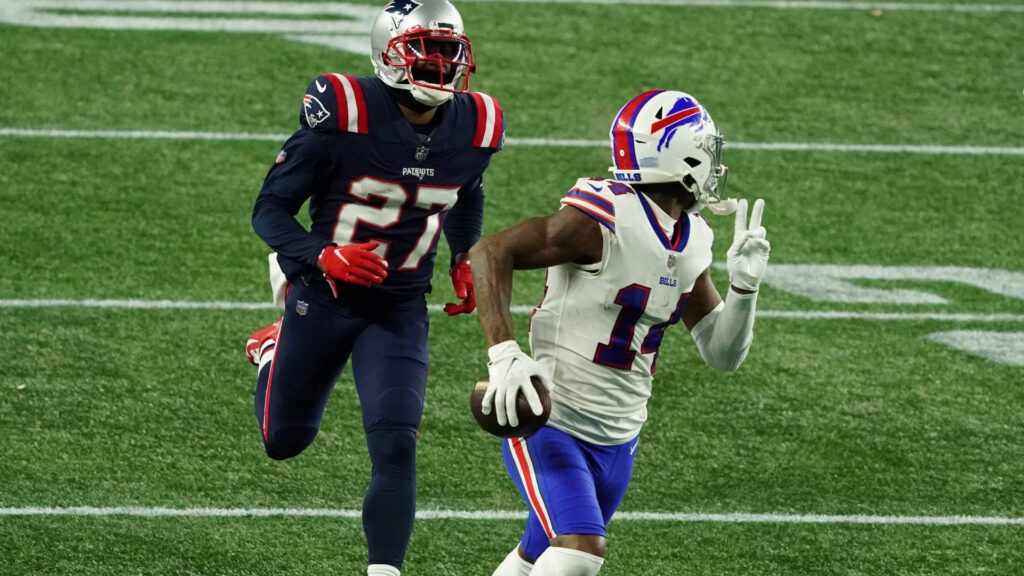 Below are various advanced stats from the Patriots’ 38-9 loss to the Bills in Week 16.

Both Patriots quarterbacks Cam Newton and Jarrett Stidham struggled to throw the football against the Bills on Monday night, making it difficult to envision either as a long-term solution.

Starting with Newton, the former MVP netted -0.18 expected points added with a completion percentage over expected of -18.2 on his 14 drop-backs. Newton’s nine-yard touchdown run was a tremendous individual effort, but we routinely see the same issues with the Pats’ starting QB.

This season, Newton has a subpar 58.9 passing grade against the blitz. Above, the Bills blitz their inside linebacker, and Newton thinks he’s protected with six rushers against six blockers. Cam waits for his longer routes to develop to his left with even numbers in the protection, but he has a running back (James White) trying to pick up a blitzing linebacker. Those matchups usually favor the linebacker, and instead of going to his quick outlet against the blitz on the shallow crosser to Damiere Byrd (right), Newton holds the ball and takes a sack.

Ultimately, Newton was once again dealing with his own struggles while his supporting cast did nothing to help him out. As Bill Belichick said on WEEI, “he did what we asked him to do.”

Belichick’s assessment of Newton’s performance is mostly accurate, and his supporting cast remains a significant issue, but that doesn’t absolve the quarterback of all blame either.

As for Stidham, the 2019 fourth-round pick isn’t doing anything in relief of Newton to offer much hope. Stidham’s EPA per drop-back was -0.12, and he had a CPOE of -18.3. Stidham’s box-score stats were heavily influenced by Jakobi Meyers’s 22-yard reception on a busted coverage.

Outside of Meyers’s catch and run, it was a lot of the same for Stidham. In this play, the second-year quarterback bails on a clean pocket and runs himself into a sack. It appears that he had Meyers open once again on an intermediate crosser but never pulled the trigger.

Newton returning next season as the bridge while upgrading the succession plan (goodbye, Stidham) remains the most likely option unless the Pats make a splash-move for a veteran.

In two of the last three games, protecting the quarterback has also become an issue for New England’s offensive line, with Newton under pressure on 50 percent of his drop-backs.

LT – “What do I do?” pic.twitter.com/ZRoqKgQNFX

Rookie left tackle Justin Herron flashes the necessary physical tools, mainly foot speed, as a run-blocker and occasionally in pass protection. But he’s in a trial by fire scenario where it’s clear multiple times a game that Herron is still learning his assignment on every play.

Starting center David Andrews is also dealing with a calf injury that is slowing him down. Over the last two weeks, Andrews gave up six quarterback pressures after surrendering only six disruptions in the previous nine games combined.

Here, Onwenu and right guard Shaq Mason combine on a double-team block at the point of attack to forcefully turn out the defensive tackle in the B-gap, opening a hole for Sony Michel.

Although Onwenu is developing nicely at right tackle, I still view him as a guard long-term and think a move inside would allow him to hit his ceiling as a player. Either way, the Patriots have a good one, but Onwenu sliding into Joe Thuney’s spot at left guard in 2021 is a strong possibility.

New England’s passing game was ineffective once again, but the separation metrics did favor the receivers this week, especially with wide receiver Jakobi Meyers. What else is new?

Meyers created an average of 4.96 yards of separation on his six targets and is having a terrific season given the limited opportunities presented in the Pats’ passing game.

Along with Meyers, the Patriots generated an opportunity for Damiere Byrd downfield on a trick play where Byrd dropped the pass. Offensive coordinator Josh McDaniels set up the double-pass by running a crack toss to Sony Michel for a big gain earlier in the drive. Newton hit Byrd in the chest with the pass, but Byrd couldn’t secure the catch.

The Patriots always seem to have one issue or another with their passing game; it’s either the quarterback, receiver error, or a breakdown in pass protection that stunts production.

Unfortunately, New England can’t seem to get everything working together at a high level.

Although the Patriots’ struggles on offense get most of the attention, Bill Belichick’s defense has quietly regressed all season long and lacks a real difference-maker in the front seven.

New England’s defense is now 26th in Football Outsiders’ DVOA metric and 24th in EPA per play; they’re not a good defense, and Bills quarterback Josh Allen lit them up on Monday night.

Part of the reason why Allen had so much success against a defense he usually struggles with is that the Pats only pressured the Buffalo quarterback on 27 percent of his drop-backs.

Other than six combined hurries for Chase Winovich and Adam Butler, Allen was comfortable in the pocket and averaged 11.8 yards per attempt with three touchdowns against the blitz.

This season, the Patriots rank 27th in pressure rate when they blitz (35%) and only pressured Allen on four of their 12 blitzes.

Allen’s 90.4 passing grade while under pressure was also a season-high against the Pats defense, a testament to his growth as a passer and the failures of New England to marry a strong pass rush with tight coverage.

Winovich’s role as an every-down player is in question due to his struggles in run defense, but it was nice to see him still apply pressure on Allen on a few occasions. Above, Winovich uses a “ghost” technique to get underneath the right tackle and force a throwaway.

Unless Winovich or Butler get home, New England’s pass rush is pretty much non-existent.

The Patriots were without starting defensive tackle Lawrence Guy and linebacker Ja’Whaun Bentley, two key players in their run defense, giving others opportunities.

One of those players was second-year linebacker Terez Hall, who had his moments and also made some mistakes. Here, Hall made a great stick shedding the climbing guard and go right through the Buffalo offensive lineman to the ball carrier for a big hit.

The 2019 UDFA got caught in the wrong gap on Zack Moss’s touchdown run but tied for the team-lead with three stops. Hall likely earned an initial backup role for the 2021 season as a more athletic run-stopper than other options currently on the team.

Buffalo’s offense did whatever it wanted, though, and was attacking at will through the air while the Pats still surrendered 0.14 EPA per rush in Monday night’s loss.

Jackson defended his first two targets against Diggs well, but the Bills wideout erupted for four catches, 87 yards, and two touchdowns into Jackson’s coverage in the final three quarters.

Early on, Jackson played his typical physical brand of press-man coverage and got the better of Diggs. In this play, Jackson uses an extended jam to slow Diggs down on the go ball. The Pats CB doesn’t allow Diggs to clear his frame by swatting Jackson’s hands out of the way, and then Jackson waits until he’s in-phase on the wideout to look back for the ball. Textbook.

However, Diggs came back on the ensuing drive and went for a 50-yard touchdown. On the play, Buffalo ran a post-crosser against a single-high coverage. The post route occupies the deep safety, leaving Jackson without safety help. Allen waits to deliver the ball to Diggs in the second passing window on the crosser, and Jackson tries to undercut the route rather than limiting the damage, and Diggs breaks free.

As Stephon Gilmore can attest to, the next step in Jackson’s development against number one receivers is knowing when he’s beat and making a tackle to limited yards after the catch.

There’s no denying Jackson’s coverage abilities, but he has to play catch-up on the 50-yarder and prevent big plays from happening. Sometimes, you lose and can’t always ballhawk.