There were some positive takeaways from the Patriots' comeback victory over the Texans. 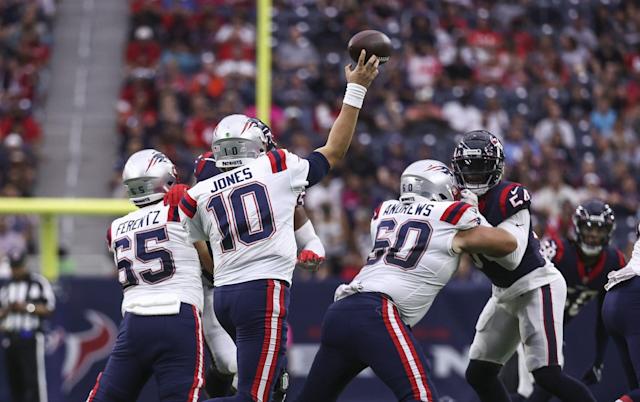 The Patriots escaped with a 25-22 win over the Houston Texans at NRG Stadium on Sunday.

Although it was an ugly victory for New England, rookie quarterback Mac Jones was credited with his first comeback victory and game-winning drive of his NFL career.

Below are various advanced stats from New England’s second victory on the season:

There are a few items to discuss with quarterback Mac Jones who was very good on the whole once again, but like any rookie, he still needs to improve in certain areas. 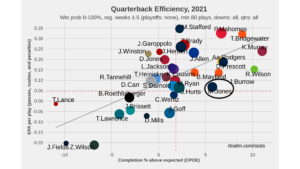 Starting with the positives, Jones led the Pats’ offense to 0.37 expected points added on his 33 drop-backs with a completion percentage over expected of plus-12.9. On the season, Mac is now eighth in CPOE through Sunday’s slate of games (plus-5.7, pending MNF). Jones is miles ahead of the other rookies in EPA+CPOE composite and is above several veterans as well.

The two areas where Jones is improving are against the blitz and off play-action. 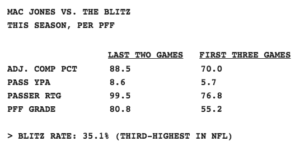 In the first five weeks, the Pats’ first-rounder is facing a blitz at the third-highest rate of any QB in the NFL (35.1%). As the splits above show, Jones struggled against blitzes in the first three games but is now shredding defenses when they blitz over the last two games.

Here, the Texans bring a five-man pressure on third down, and the offensive line does an excellent job blocking all five rushers. Kendrick Bourne wins to the inside on a slant-flat combination, and Jones gets the ball out quickly into the vacated area for a 15-yard gain.

In this play, the Pats sell the run by simulating a fullback lead play. The play-action gets the linebacker level to step up into the line of scrimmage, and Jones’s quick release at the top of the drop and accuracy to hit Jakobi Meyers in stride leads to a 24-yard completion.

To tell the entire story, it’s also worth mentioning that Jones threw one interception off play-action, and PFF marked him down with three turnover-worthy plays.

Jones has eight turnover-worthy plays on the season at a rate of 3.9%, which is 19th out of 31 qualified quarterbacks. For a rookie, it’s good. Still, Jones needs to improve there.

Overall, Mac is heading in a great direction for the Patriots and elevates his game when the stakes are high.

From a statistical perspective, the two standouts on the offensive line were right guard Ted Karras (zero QB pressures) and left tackle Justin Herron (one hurry). After struggling with the starters, Herron elevated his game with the backups in his best performance yet.

On the third-down play to Bourne, the interior offensive line did an excellent job of passing off a blitz that gave the Pats’ starters fits. The Texans run a stunt blitz where the standup linebacker wraps around the defensive tackle on a five-man pressure. Center David Andrews and right guard Ted Karras pass it off, giving Jones time to hit Bourne over the middle.

Although most of the starters will return to their posts when healthy, Karras is earning a chance to start, especially since right tackle Trent Brown is now on IR.

The Patriots’ best-five combination on the offensive line is now as follows:

And there’s a chance that Herron and fellow backup tackle Yodny Cajuste will push for reps at either tackle spot (Wynn needs to step it up).

Regardless of how all the shuffling pans out in the future, the five linemen who played nearly every offensive snap in the win over the Texans deserve credit for a solid performance.

We are going to start turning this section into a Matt Judon appreciation post every week.

The Pats’ linebacker added two more sacks, a hurry, two tackles for loss, and three run stops to his leger. In the first five weeks, Judon’s 6.5 sacks are tied for the second-most in the NFL, and his 22 quarterback pressures are tied for ninth in the league.

Furthermore, Judon is producing at a high level against true pass sets, which take out screen passes and play-action drop-backs to get a more predictive feel for pass-rush prowess.

On true pass sets, Judon ranks third in pass-rush productivity (19.4) and tenth in pass-rush win rate (33.3%), with half of his quarterback pressures coming in those situations (11 of 22).

In his two sacks against the Texans, one came on a PA rollout play where he aggressively shut down Mills’s rollout, and the other was on a true pass set. Judon uses a quick first step to jump inside the right tackle and finishes with a rip move to beat the blocker on the second sack.

The Patriots used another unaggressive game-plan by only blitzing Texans quarterback Davis Mills on seven of his 32 drop-backs, leading to a pedestrian pressure rate (21.9%).

But Judon continues to star in Bill Belichick’s defense by wreaking havoc off the edge.

Along with Judon, Pats linebacker Dont’a Hightower had his best game of the season from a run defense perspective, tallying four stops on 15 plays against the run.

If Hightower is starting to shake off the rust, that would be a significant development for the defense.

Pats fans should shield their eyes from this week’s coverage stats which are as bad as expected.

On top of those three struggling in coverage, safety Devin McCourty gave up completions on both passes into his coverage and wasn’t the last line of defense the Pats needed.

The first half against the Texans was a classic learn from it and throw it out tape; too many guys were going for the football and staring in at the quarterback rather than covering actual receivers.

Williams was a liability and shows how valuable veteran Jalen Mills is to this secondary, especially with Dak Prescott’s Cowboys coming to Gillette Stadium in Week 6.

There’s no sense in posting breakdowns in the secondary again. You’ve all seen them at this point. The second half was better, so the Pats can hopefully build on that moving forward.