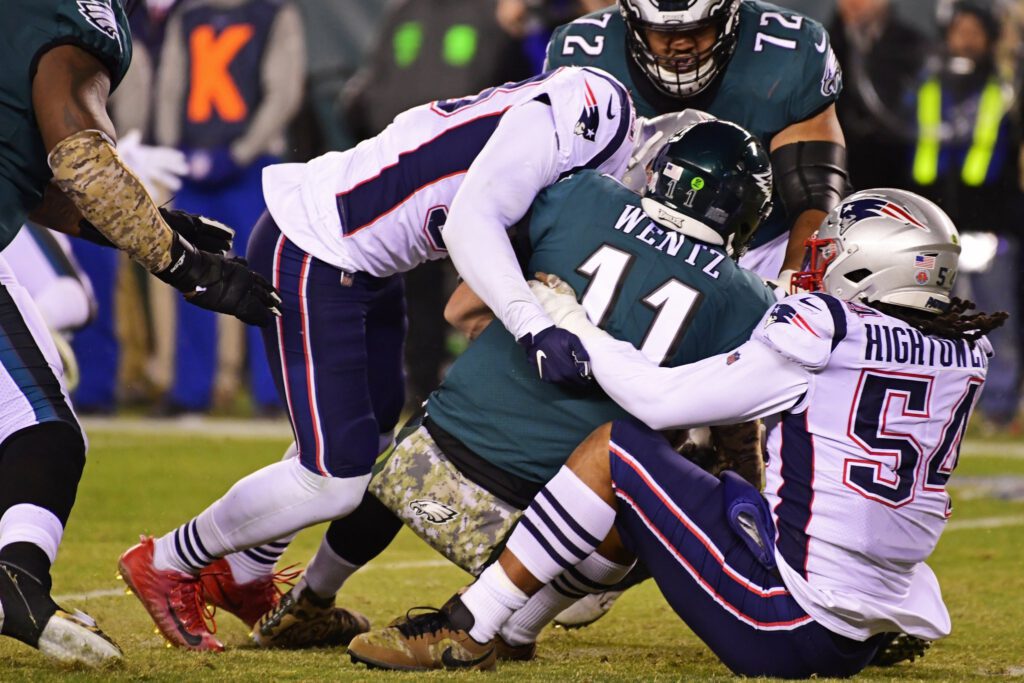 Below are a variety of advanced stats from the Patriots’ 17-10 victory over the Eagles.

According to Pro Football Focus, Sunday’s win over Philadelphia was Brady’s second-worst performance of the season behind only New England’s Week 4 contest with the Bills.

Brady was four-for-13 for 56 yards (4.3 average) on passes of ten or more yards, and his longest completion of the day only traveled 18 yards in the air to Ben Watson.

After charting all of Brady’s throws, he had six off-target passes against the Eagles, which is around his season average. But based on the TV copy, Brady didn’t see the field well.

Although Brady’s supporting cast needs to shoulder some of the blame, the Pats quarterback didn’t perform up to his standards even when his offensive line kept him clean on Sunday afternoon.

Brady posted a season-low 46.4 Pro Football Focus grade on 32 drop-backs where there was no pressure on the quarterback, which is well below his season grade of 81.8.

On a positive note, Brady still made some nice throws down the field that shows that he can still sling it when the opportunities present themselves.

The completion to Watson mentioned above was a well-placed dart that protected his tight end from the coverage as Belichick broke down on his conference call on Monday morning.

“We were in a three-by-one formation. [Rex] Burkhead went in motion, and again, it looked like there was a little bit of a – the Eagles had to kind of slide over and adjust to that. And when the linebacker went inside to take [Matt] LaCosse, then Ben was able to kind of work up the field on [Avonte] Maddox. Tom made a good throw. It was too far outside for the safety to get it and too far up the field for Maddox to get it, so it was really a good throw, a good catch,” the Pats head coach said.

Along with that throw, Brady also fit a bullet into Julian Edelman on a crossing pattern where the coverage was good, but the pass by the Pats quarterback was better.

In the time to throw department, Brady’s release has slowed each of the last two games, posting an average of 2.72 seconds against Philly, which speaks to the lack of separation by his receivers. The Pats pass-catchers didn’t get open early or often on Sunday, forcing Brady to hold the ball in the pocket for longer than usual.

There’s plenty of blame to go around for the Pats struggles in the passing game on Sunday, including at the quarterback position where Brady was not at his best.

In pass protection, Brady was under pressure on a modest 33 percent of his dropbacks, which is around average for a day at the office in the NFL.

Newhouse had trouble with Eagles pass rusher Derek Barnett on the left side while Karras had a tough matchup with All-Pro defensive tackle Fletcher Cox. Newhouse’s inability to hit his landmarks, a result of well below-average foot speed, makes it difficult for him to maintain leverage and square-up pass rushers coming off the edge.

Belichick also mentioned on his conference call that the team would like to activate 2018 first-round pick Isaiah Wynn off of injured reserve this week.

The oft-injured Wynn is eligible to return to game action on Sunday against Dallas, and in theory, offers a significant upgrade at left tackle over Newhouse.

The Patriots offense struggled in every way to move the ball through the air with Brady completing only seven of his 15 passes for 57 yards to receivers lined up in the slot.

Although he didn’t see a target, rookie N’Keal Harry, who made his NFL debut on Sunday, lined up inside on five of his 32 snaps. Harry’s got plenty of versatility to align in different spots and the potential to be a productive big-bodied slot.

Here’s one play that did work with a receiver operating out of the slot, James White. The Pats are in a bunch set to Brady’s left with White as the inside receiver. The point man, Ben Watson, releases vertically upfield into White’s route path to create traffic against man coverage. White then runs into the flat from the inside, forcing Eagles safety Malcolm Jenkins to navigate around Watson, and catches the ball for 12 yards.

If the Patriots offense wants to get back to its usual self, they’ll need to re-establish themselves in the middle of the field.

Now let’s get to the good stuff on the defensive side of the ball, where the Patriots pressured Eagles quarterback Carson Wentz on nearly half of his dropbacks (45.8).

In all, 11 different Patriots registered a pressure on Wentz with five of those resulting in sacks and another seven hits on the Philadelphia quarterback.

Leading the way with seven total pressures and a sack was linebacker Dont’a Hightower, who tallied those pressures on only 34 pass-rush snaps.

Here, Hightower is lined up on the line of scrimmage as a stand-up edge rusher against Eagles backup right tackle Hal Vatai. Hightower starts his rush by angling inside, using a jab step to get Vatai leaning in that direction, and then comes back to the outside to go around Vatai for the sack. A move referred to as the jab-and-go.

Along with Hightower, the Patriots also got to Wentz when they blitzed the Eagles quarterback.

On Elandon Roberts’s sack, the Patriots bring a six-man rush at Wentz against six Philly blockers. Roberts loops around an interior push from Jamie Collins and blows up Eagles running back Miles Sanders to take down Wentz.

Finally, the Patriots all but iced the game with a zero blitz on fourth down. The Pats called their favorite zero pressure where they use “trail” techniques sending two defenders through the same gap. The pocket collapses on Wentz, forcing him to get rid of the ball, and he nearly completes a prayer to Nelson Agholor, but JC Jackson knocks it away at the last second.

In run defense, nose tackle Danny Shelton led the team with five run stops in one of his best all-around efforts of the season, which included a first-half strip sack as well.

On this third-quarter run stop, Shelton defeats right guard Brandon Brooks, arguably the best interior linemen in football, with aggressive hands and excellent play strength. After making contact with the back in the backfield, Shelton cleans things up to make the stop for no gain.

The Eagles offensive line is one of the best units in football, and the Patriots recovered after a shaky start to dominate the line of scrimmage.

In the secondary, the Patriots held Wentz to 5.4 yards per attempt, flexing their depth and versatility with a variety of different coverages against Philly’s top playmakers.

Against tight end Zach Ertz, the Patriots through multiple defenders at the Pro Bowler with Stephon Gilmore on third down and late-game duties while the safeties handled the rest.

“They do a good job of moving him around and putting him in different places, different locations. He can be on the back side by himself, he can be in the slot or in the No. 3 position, he can be part of a bunch or stack grouping and motion and so forth. All those different combinations, depending on what defense you’re in, creates some level of adjustments. So, then when you multiply several coverages times several formations and include motions into those formations, then pretty soon you’re getting into some exponential number of adjustments,” Belichick told me on Monday following the win.

“I thought our defenders, and there were a number of them involved – so, as you really referenced, not just one thing. We had a number of defenders that had to be involved in the communication, the adjustments and tried to mix up different looks, not just on Ertz but on the whole offense.”

Here, the Patriots are in man coverage against Philly’s three-by-one set. Wentz thinks he has Ertz in single coverage against safety Terrence Brooks, so he immediately looks to his tight end. However, the Patriots dropped the safety on the single-receiver side into a bracket on Ertz as he makes his way across the field. With Ertz doubled, Wentz has to hold the ball, and the rush collapses on him for a sack.

The Patriots also handled the Eagles’ core concepts well, like the mesh crossing concept shown above. The receivers cross over the middle of the field, and Devin McCourty shows off his speed to chase down Ertz before he could turn upfield after the catch.

On this play, Gilmore is the flat defender in a cover-2 scheme on the boundary. The Eagles run a levels concept where Gilmore needs to protect against a corner route while also being aware of a pass into the flat. Wentz tries to fit the ball into Goedert on the corner route, but Gilmore closes perfectly on the ball to force an incompletion.

The Patriots defense had the perfect marriage between coverage and rush to shutout the Eagles after giving up ten early points on Sunday.