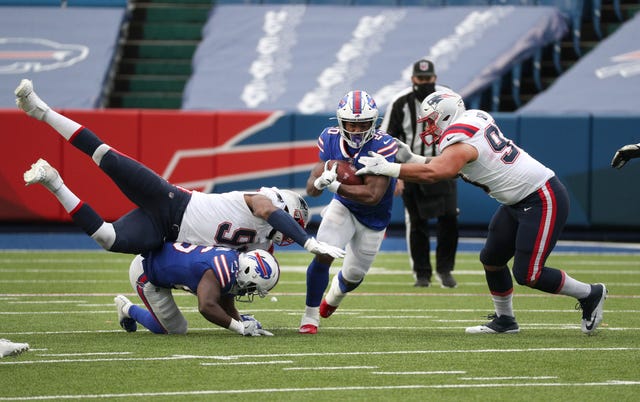 Below are a variety of advanced stats from the Patriots’ 24-21 loss to the Bills in Week 8.

Patriots quarterback Cam Newton had a much better performance against the Bills, even if he fumbled the game away on the final drive.

Newton produced his highest EPA per drop-back, QBR, PFF grade, and adjusted completion percentage since his start in Week 2 against the Seahawks. He even threw right!

If Newton plays turnover-free, the Patriots can win with his performance on Sunday in Buffalo.

The former MVP’s best throw of the day came on a 22-yard deep over route to Damiere Byrd. New England finally made Newton comfortable by avoiding under-center play-action, calling play-action either from the gun or with bootleg action. Here, Newton gets the linebackers to bite on the fake then uses a pump-fake to hold the flat defender on Jakobi Meyers’s return route before hitting Byrd in-stride from a muddied pocket.

Newton hit Byrd on a stop route along the sideline against a blitz as well. This time, Newton sees the blitz pre-snap, alerts Byrd, and the two are on the same page as they connect for a first down. Progress!

Although his situational play-calling in the first half was perplexing, Pats offensive coordinator Josh McDaniels designed a good game plan for Newton.

McDaniels let Cam be Cam, having him throw from moving pockets (bootlegs), in the shotgun, and dialing up quarterback run designs or read-option plays to incorporate Newton’s mobility.

The game plan was even reflected in Newton’s time to throw, which was a steady 2.55 seconds on average after last week’s 3.13-second debacle for quarterback and play-caller.

We’ll have more on the Patriots offense following a review of the coaches tape, but Newton, with McDaniels’ help, might be pulling out of his slump.

New England’s had an up-and-down performance in pass protection. However, several of Buffalo’s pressures came on their 11 blitzes against non-offensive linemen.

In all, Newton was under pressure on 46.4 percent of his drop-backs and only averaged 3.8 yards per attempt against the blitz, with five pressures allocated to non-OL.

Other than Thuney, the other four spots along the line allowed one pressure each in solid outings, but again, tight end Ryan Izzo and the running backs struggled with their challenging assignments.

Here, the Bills show a strategy that many teams are using against the Patriots. Buffalo has ten defenders within five yards of the line of scrimmage with one safety deep. The weak-side safety, Jordan Poyer, is inserting himself into the play as either an eighth run defender or blitzer since the defense isn’t afraid of any vertical threats in the Pats offense. Poyer blitzes and hits Newton as he throws after beating Rex Burkhead on the rush. Newton had a chance to hit Byrd on a slant, but Poyer’s pressure affects his throw and process.

Defenses are starting to walk their safeties up to the line consistently as an extra body in run support or blitzer, forcing Newton into quick decisions and receivers into quick separation.

Neither are coming easy at the moment, as Newton is averaging 5.4 yards per attempt against the blitz (8.5 average without blitz).

The Patriots currently lead the league in both EPA per rush and rushing success rate through Sunday’s action and are the only team with a success rate above 50 percent.

– Check out the Wynn/Thuney double-team on the TD run
– Good pull/lead by Mason and Johnson on both
– Good patience/burst/contact balance by Harris pic.twitter.com/szORruHu6X

The Patriots went to their cross-lead counter scheme for a 22-yard touchdown and an 18-yard scamper by Harris on back-to-back drives. The Pats use a fullback to get effective double-teams on the line of scrimmage, leading to huge holes for Harris after good pulls by right guard Shaq Mason and leads by fullback Jakob Johnson.

The Patriots offense is currently 28th in the league in scoring (19.4 PPG), but even with teams stacking the box, they’re still averaging 5.1 yards per rush this season.

Everyone knows my feelings by now on receiver separation metrics, but this week they did reflect that Pats wideouts were getting more open on their targets, likely due to several factors.

With Newton playing better football, he was delivering passes mostly on time to his targets, and the play design helped him get the ball out of his hand faster, both wins for New England.

Leading the way in the box score with great separation metrics was wide receiver Jakobi Meyers, who uses polished route-running and sequencing to make up for lacking speed.

Despite being one of the slower wideouts in football, Meyers has a full bag of routes he can run at the short and intermediate level, preventing defenders from sitting on the short stuff.

Here’s a two-play sequence where Meyers pairs together an over route with a corner pattern using the same stem but breaking different at the top of his route. He might not run by anyone, but he quickly breaks into different routes, which gives DBs enough to worry about each week.

Meyers is also great at tempoing his routes and getting defensive backs in poor positions with his releases. In the play above, Meyers uses a two-step hesitation release that sells the screen to get Taron Johnson to transition his weight to his outside foot then breaks off the slant.

The 2019 undrafted free agent doesn’t solve problems creating explosive plays or preventing defenses from crowding the box, but he should be in the mix as a possession receiver.

New England’s problems on the defensive side of the ball might not get the same attention as the offense, but they are every bit as problematic.

The Pats defense missed a combined 19 tackles over the last two games, and this season, are allowing the highest success rate in the NFL on early-downs and are 27th in EPA in those spots.

In other words, Bill Belichick’s defense cannot stop a nose bleed on first and second down right now.

Buffalo’s opening drive of the second half was a perfect summation of the Patriots’ struggles. The Bills got an 18-yard run (Bentley whiffs), a 41-yard catch-and-run (nobody closes), and a total give-up on a four-yard touchdown run (another Bentley whiff) for a quick TD drive.

In passing situations, New England is doing just fine for the most part, pressuring Bills quarterback Josh Allen on 45.5% of his throws and producing a negative EPA per drop-back (-0.06).

But their early-down defense is preventing fewer opportunities for the Patriots to create negative plays with their pass coverage.

The Patriots finally got more aggressive this week by blitzing Allen on 13 plays, which had mixed results but did yield some negative plays in key situations.

Here, the Pats bring a six-man pressure that gets a one-on-one for Deatrich Wise against the right guard. Wise beats his man, pressures Allen, and JC Jackson has good trail technique downfield on Stefon Diggs’s deep over route to force an incompletion.

New England is still capable of locking down passing attacks, but they need their early-down defense to turn things around to give them favorable down and distances.

As you would expect based on their early-down metrics, the Patriots run defense is currently 25th in EPA and 29th in success rate against the run.

New England matched Buffalo’s ten and 11-personnel with their dime package, struggling to stop the run and tackle the Bills’ ball carriers that Belichick put on “poor [tackling] fundamentals.”

The Pats DBs struggled to get off blocks as the Buffalo offensive line climbed to the second level, often engulfing those smaller players from having any chance at tackling the runner.

There were two opportunities in the sequence above where linebacker Ja’Whaun Bentley couldn’t finish the play, but there were also instances where the edge wasn’t set.

Here, the Bills ran outside zone to the strong-side of the formation, and the combo block between the left tackle and tight end gets John Simon turned inside. With Simon turned inside, and Jon Jones flowing to the jet motion, there’s no edge, and Zack Moss breaks off a big gain.

There are two main issues at play here: first, Bentley’s role in this defense is to tackle ball carriers when the play flows back to the inside, and he’s not. Second, New England’s entire system is predicated on setting the edge, which is not happening consistently.

To make matters worse, Belichick confirmed on Monday that nose tackle Beau Allen won’t play this season due to injury, so in-house reinforcements aren’t walking through the door.

New England might have a personnel and execution problem in their front seven without a fix.

Due to their early-down struggles against the run, the Patriots pass defense didn’t get much work on Sunday, but they did hold up their end of the bargain.

As we mentioned, Bills quarterback Josh Allen had a negative EPA on his 22 drop-backs and only found big gains due to poor tackling and pursuit.

Jackson was in coverage on Diggs’s 41-yard catch, but other than that, he played a very clean game on a good receiver without much help (post-safety or robber coverage).

On his interception, the Pats are in cover-one man-free, which means there’s one deep safety in the middle of the field. Jackson uses the sideline as his help and is in tight coverage to react to Allen’s poorly thrown ball.

New England’s defense also used its cover-one double robber scheme on third downs, with rookie linebacker Josh Uche flexed out on the running back here. Uche uses his inside help from the robber to bracket the running back and then peels off to tackle Allen short of the sticks.

The Patriots were able to limit most of the Bills’ pass-catchers, completely erasing John Brown, by playing their brand of coverage when the opportunities presented themselves.

Belichick’s pass defense can still create negative plays when given a chance.