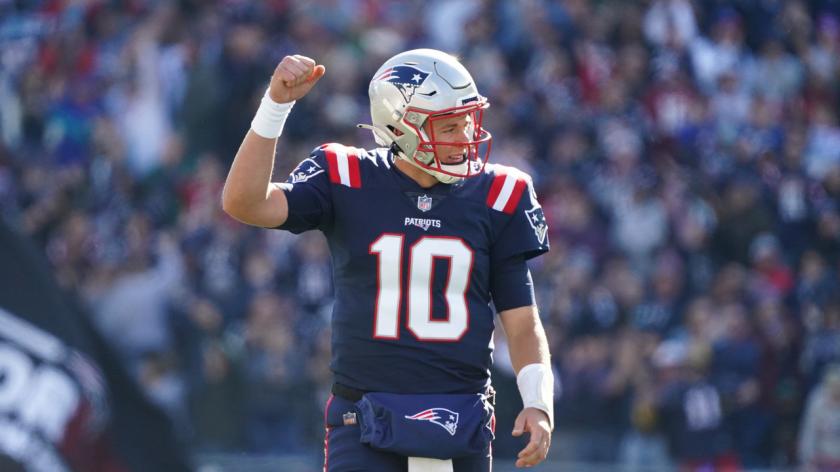 The Patriots’ blowout victory over the Jets gave us a glimpse into New England’s potential as we approach the second half of the 2021 season.

With rookie quarterback Mac Jones leading the offense to a 54-point explosion, the Pats’ offensive line found a solid starting five that kept Jones clean on a season-high 79.5% of his drop-backs and paved the way for a 56% success rate on 27 rush attempts.

Defensively, news broke on Monday morning that starting slot corner Jon Jones will miss the rest of the season due to a shoulder injury, making replacement Myles Bryant and third-year corner Joejuan Williams’s even more important to the Pats’ secondary.

The Patriots still have questions to answer in their secondary, and it’s fair to wonder if their offense can replicate their execution in Sunday’s win against better defenses in the future. Still, it was great to see an old-fashioned Patriots ass-kicking of their division rivals.

Here are a variety of advanced stats from New England’s 54-13 win over the Jets in Week 7:

Although the Patriots’ rookie quarterback graded out well, his accuracy metrics were down this week compared to most of his first six starts.

Jones’s completion percentage over expected (-0.6) and adjusted completion rate (72.7%) were his second-lowest outputs of the season outside of the Week 3 loss to New Orleans.

The Patriots’ offensive production is rapidly improving over the last three games, though, with Jones posting the ninth-best expected points added over that span. 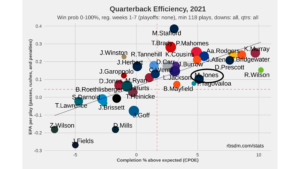 Mac is now 16th in EPA+CPOE composite on the season, which combines both stats to rank the starting quarterbacks in the NFL (see chart above). Ranking 16th out of 33 QBs just seven starts in is impressive.

(according to Pro Football Focus)

Another positive development for the Patriots’ rookie is that he’s becoming far more efficient on deep throws in the last two games, with five completions of 20-plus yards since Week 6.

In Sunday’s win, Jones was hunting for a big play against New York’s single-high coverages all afternoon and finally hit on a 46-yarder to Kendrick Bourne. The throw was Mac’s longest pass in terms of air distance this season and was right on the money from the Pats’ QB.

Jones was a terrific deep-ball thrower during his time at Alabama, but many evaluators chalked that up to the first-round playmakers around him on the Crimson Tide offense.

Although a two-game sample size isn’t big enough to make any grand proclamations, Mac is certainly improving as a downfield thrower and adding more dimensions to his game each week.

The main reason Jones is finding more success throwing deep is that the Patriots’ offensive line is buying him more time to scan downfield.

This week, Mac was only under pressure on eight of his 39 drop-backs or 20.5%, the highest “kept clean” rate for the Patriots’ quarterback through seven games this season, and Jones took advantage by adding 0.45 expected points per drop-backs (92nd percentile).

One thing remains clear: when the offensive line keeps Jones clean in the pocket, he’s a tremendous passer, grading out as an elite quarterback when kept clean (90.9, ninth).

Along with keeping Jones clean, the O-Line created huge holes for the Pats’ running backs all afternoon, especially the Mason-Onwenu tandem on the right side (see above).

Once the offense blew the game open in the first half, the Patriots seemed to dial back the pressure on the Jets’ quarterbacks, contributing to a low pressure rate.

Jets quarterbacks Mike White and Zach Wilson were only under pressure on 20.5% of their 44 drop-backs. However, the Pats pressured Wilson on five of his 11 drop-backs and only blitzed White 24.2% of the time. In other words, they backed off in the second half.

Leading the way for the Pats’ defense was Christian Barmore, who is having a great rookie campaign that longtime teammate Mac Jones overshadows. Barmore has 17 QB pressures on the season and is seeing a high double-team rate due to the nature of his role in the scheme. He’s working effectively with others on interior stunts and consistently finds his way into the backfield.

Along with Barmore, the early turning point of the game was a quick three-and-out by the Jets offense, thanks to a third-down sack by slot corner Myles Bryant. The Pats blitz Bryant over a condensed formation to Wilson’s left, allowing Bryant to disguise it, and use pass-rusher Josh Uche in a wide-nine technique to keep Wilson in the pocket.

The Patriots’ pass rush wasn’t tested much because this one got out of hand quickly, but they were getting to Wilson early before the game turned into a blowout.

Based on how our followers react to the Patriots’ defense, it feels like many wouldn’t expect that New England’s run defense is one of the best in the league through seven games.

The Pats came into the week as the ninth-best run defense in Football Outsiders’ DVOA metric and held the Jets to a 42 percent success rate and 3.6 yards per rush on Sunday, so that ranking ought to at least stay in the top ten.

Leading the way with three run stops was Lawrence Guy, who was also responsible for holding the point of attack for teammates to make plays on a few other occasions.

Here, Guy and nose tackle Carl Davis hold up the play side by pressing their blockers into the backfield, forcing Jets running back Michael Carter to stay inside the tackles, allowing linebacker Ja’Whaun Bentley to fill the gap and make the stop.

New England’s defensive line is doing a much better job of keeping the linebacker level clean against the run this season, making it easier for big run-stuffers like Bentley to make plays.

The Patriots’ secondary felt shaky again after two “burn the tape” performances in a row against Dallas and Houston, but the Jets didn’t end up being that dangerous through the air.

New York ended the game by adding a below-average 0.02 expected points per drop-back, and after a hot start, backup quarterback Mike White came back down to earth (-0.01 EPA per play).

Still, combining top slot corner Jon Jones’s season-ending injury with another iffy performance by Jalen Mills, J.C. Jackson is the only Pats’ corner that you trust to play at a high level.

Jackson was good again, allowing only four catches on nine targets with a smooth interception on a comeback route by Jets rookie Elijah Moore.

The Pats also got decent production out of Jones’s replacement in the slot, Myles Bryant, and third-year corner Joejuan Williams, the latter of which had arguably his best game as a Patriot.

Williams broke up three of his five targets into his coverage. He played physically imposing coverage, closing on the ball to force it out at the catch point on several occasions.

The big-picture concerns with New England’s secondary are legitimate if this team has playoff aspirations, but Bryant and Williams stepped up in the win over the Jets this week.