Bengals get their swagger back and show determination in a desperately needed win. 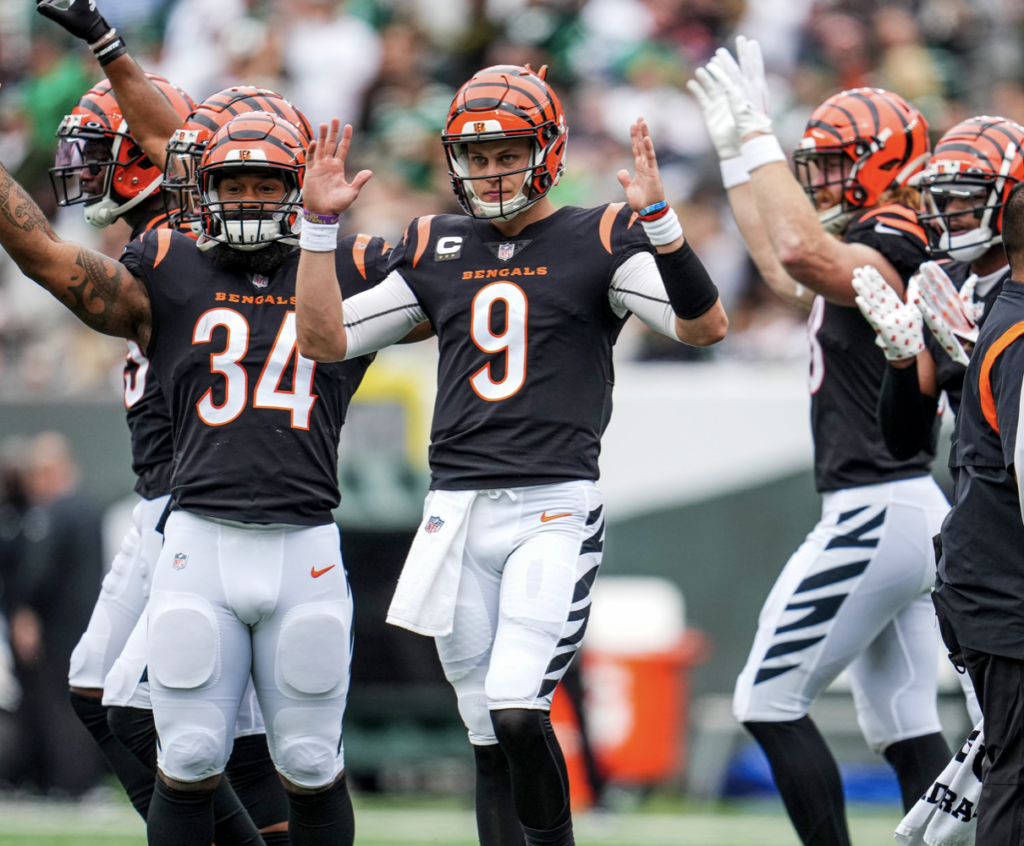 EAST RUTHERFORD, N.J. — Don’t let the score fool you. The 27-12 win the Bengals registered over the New York Jets was anything but easy.

The 15-point margin doesn’t reflect the toll the game took on the Bengals, mentally and physically.

But the only thing stronger than their toughness Sunday was their aggressiveness. They sent a message to themselves and set a tone for the entire game when they decided to take the ball after winning the coin toss and marching 75 yards for the score. Burrow was on point and on time and gave the defense its first lead to work with in 2022, a 7-0 advantage when Joe Burrow scrambled to his left and hit Samaje Perine.

“We set a tone today and we’re just going to keep carrying that over,” said Bengals right tackle La’el Collins, who overcame a back issue to play the entire game. “Just build off of that. Keep our eyes forward.”

It took a while for the Bengals pass rush to solve the Jets offensive line but when tackle George Fant went down with an ankle injury, Trey Hendrickson took that as his cue to take over.

Hendrickson was in on three Bengals sacks of Joe Flacco, and on each one he forced the ball loose from the quarterback. Three strip-sacks is quite the day for a defensive end who was looking for his first of 2022 entering Sunday.

“When you’re playing football, you’re playing for your brothers next to you. It’s not all about the statistics. I know they’ll come. We just play hard up front, rush the passer effectively and just keep chopping wood. I’m not looking at stats. We had two losses and that’s what’s important to me.”

Trey Hendrickson not worried about stats "They'll come. The win is what matters. You're playing for your brothers next to you." pic.twitter.com/M6utTSHPwV

They lost one of their defensive captains in the first half when DJ Reader went out with a left knee injury that he and the team hope won’t be too serious and sideline him indefinitely.

Tee Higgins took a shot to the mouth from Lamarcus Haynes on his 45-yard second-quarter reception that left him with a fat lip.

“Our receivers are as tough as they come,” head coach Zac Taylor said. “They really are. That’s their mentality. Tee went up going to get the ball knowing there’s a post-side safety that can come to deliver a hit. It doesn’t matter, he comes down with the ball. He was available a couple of plays later, we were just down in the red and weren’t calling a play to him, so we kept him out the rest of that drive.”

Tyler Boyd bounced off safety Jordan Whitehead for a 56-yard touchdown on the last play of the first quarter to give Cincinnati a 14-6 lead and suddenly the Bengals were able to breathe.

“What’s understood doesn’t need to be explained. I think the whole world knows that. We’re the number one receiving corps,” Boyd said. “I don’t have to preach that. We take pride in our job. We all want to make plays, we all want to do what we have to do to help the team win.”

Boyd, Higgins and Chase all made big plays at big moments as their quarterback was being pounded to the ground.

“We’re all going to ride for each other no matter what,” Boyd continued. “If we do something that wasn’t good, we’re going to pick each other up and vice versa. Anytime we call runs, we pride ourselves on going down there and not letting our guy make the tackle on the running back. So our overall game, we want it to be at an all time high and we push each other for it to be that.”

Burrow, who finished 23-of-36 for 275 yards, was crunched to the ground on two of his three touchdown passes on the day, facing a Jets blitz that was so desperate to get to the Cincinnati quarterback that it sparked a fight between Quinnen Williams and his defensive line coach.

Once they got to Flacco and built their lead, it was time to kill the clock in the fourth quarter. And with Joe Mixon on the sideline nursing a sore ankle, it was Perine’s time to shine. He ran the ball nine times for 49 yards on a drive that chewed up eight minutes of the clock.

“I thought (toughness) really showed on that last series with just running the ball,” Burrow told me. “Everyone knows we’re running the ball, we’re getting in our big 13-personnel (one back, 3 tight ends) and running outside zone, everybody knew what was happening but we were able to do it. Samaje did a great job, offensive line played great, and that last series was the epitome of what we want to be for the rest of the year.”

After watching Burrow get sacked 13 times and pressured 30 times in the first two gams, the Jets smelled blood in the water Sunday. But this time, the Bengals were the tougher and more determined team from the start.

“We just needed to get the first win. I didn’t really care what it looked like,” Taylor said. “I didn’t care if it was 3-0 or if it was 49-3. We just needed to rip that band aid off and get that first win. We’ve been a confident team all along. I really felt this team’s confidence over the course of the last week and last night. That’s the only validation I need is to see the look in their eyes. They go out to practice and they get ready for the game. We knew we were going to get a good performance from our guys and they delivered.”

Now, it’s about forgetting this win quickly and moving onto the 3-0 Miami Dolphins Thursday night at Paycor before a national audience.

“Just the win itself is all we needed,” Taylor said. “I think our guys know what we’re capable of. They don’t need the validation. We just needed to get into the win column and start to create that positive momentum, not only with our team but with the fans. We want them to have something to be excited (about) coming off a win going into Thursday night at home. We saw what the Jacksonville game was like last year.

“It was one of the best scenes I’ve ever been around. We expect the same thing with a red hot Miami team, 3-0. They’ve beat some really good football teams, so it’s going to be a tough test for us. I know our fans are going to be there to help us do everything we can to pull out a win.”