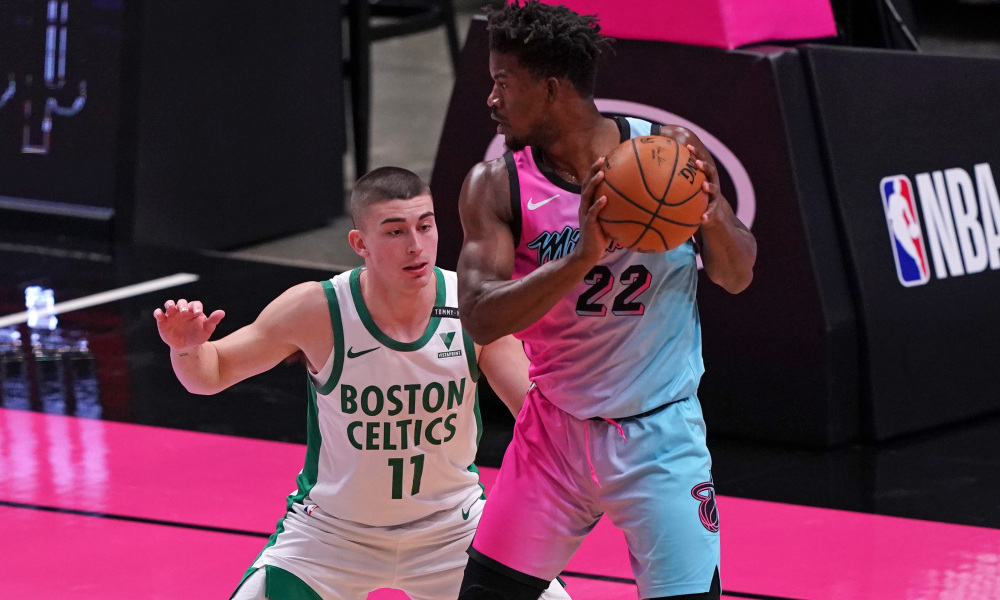 Miami enters one game ahead of Boston for the six seed, leaving the Celtics in the play-in tournament. The C’s beat Miami in January, giving them the tiebreaker if they win one game in this series. This is the first of Boston’s final five games.

According to the online sports book Betonline.ag, the Heat are 1 point favorites.

Victor Oladipo is out for today’s game as he continues to deal with a knee issue. Andre Iguodala (thigh) is available.

Jaylen Brown (sprained ankle) will not play in today’s game for the Celtics. On top of that, Robert Williams is probable with turf toe, with Brad Stevens saying this afternoon that he expects him to play, but he’ll be day-to-day as pain allows.

The Heat have won seven of their last ten games and three of their last four. They are 36-31 on the season, good for fifth in the Eastern Conference.

Although Jayson Tatum still leads the team in scoring on the season (26.3), he only managed to put up nine points in Boston’s loss to Chicago. Tatum shot 3-of-15 from the field and 0-for-7 from deep. Kemba Walker has been carrying the load offensively, averaging 32.5 points over the last two games. Evan Fournier has also been hot over the previous five games, putting up 13.2 points on roughly 56-52 shooting splits. Boston dropped six of their last ten games before today.

Over the last five games, the Heat have had the best offensive rating in the NBA (122.7) and are top ten in points scored (119.0). Over that same stretch, the Celtics have one of the worst defensive ratings (116.8). Marcus Smart will have to lead the charge on that side of the ball because a lackluster defensive effort just won’t get it done today.

Miami has eight different players averaging ten or more points in the last five games. They get production in many places, so the Celtics will not be able to focus their defensive efforts in one place. As Stevens mentioned in his press conference after the last game, rotations will have to be crisp. There is no time for standing around on defense.

The Celtics have been on fire from three-point range in their last five games (42.3%). They are also top ten in assists over that same stretch (26.6). The ball has been moving well on the offensive end. If that can continue today, the C’s should be in a solid position to take home the win.