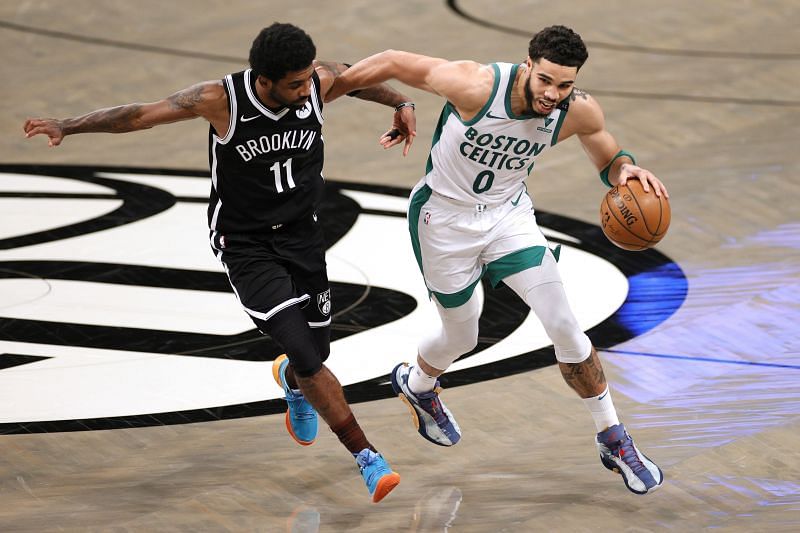 According to the online sports book Betonline.ag, the Nets are 8 point favorites.

Brooklyn only listed two players on their injury report for tonight’s game. Spencer Dinwiddie remains out for the season after tearing his ACL three games into the regular season. Landry Shamet is probable to play after dealing with a sprained ankle.

Aside from Jaylen Brown (wrist), Boston’s injury report only lists Robert Williams as questionable. Williams continues to deal with turf toe and missed the Celtics’ last two practices. Despite this, Shams Charania of The Athletic reported that he is expected to play.

Kyrie Irving (26.9 points per game), Kevin Durant (26.9), and James Harden (24.6) make up most of Brooklyn’s offensive attack. Despite this, the trio only played a combined 202 minutes together this season. Both Harden (36) and Durant (35) failed to crack 40 games. If they suited up for more games together they would have qualified as the highest-scoring trio in the NBA this season (78.4 PPG).

Only three other players on the Nets average in double figures – Joe Harris (14.1), Jeff Green (11.0), and Blake Griffin (10.0). All three shoot better than 38.0% from deep and Harris led the league in three-point shooting (47.5%). Griffin joined the team at the deadline and spends the majority of his time splitting small-ball center duties with Green.

Jayson Tatum leads Boston’s offensive charge. He scored 50 points for the third time this season in the win vs Washington. He played with an aggressive mentality that allowed him to get to the free-throw line a whopping 17 times (17-of-17). Kemba Walker chipped in with 29 points. His efficiency numbers steadily increased since returning from injury, with his season numbers now sitting right around his career averages.

Tristan Thompson managed to put together an effective performance vs Washington. He posted a double-double with 12 points and 12 rebounds. His hustle on the offensive glass set the tone for Boston. With the playoff rotation shortened, Aaron Nesmith, Romeo Langford, and Payton Pritchard should qualify for minutes as well.

Brooklyn finished with the second highest-scoring offense in the NBA this season (118.6 PPG). They ranked first in field goal percentage (49.4%) and second in three-point percentage (39.2%). Their 49.4% FG is the best mark since the Warriors shot 50.3% in the 2017-18 season. They also finished top ten in free throw attempts (22.5), free throw percentage (80.4%), and assists per game (26.8). With the big three they put together, their offensive potential is among the all-time great teams.

On the flip side, the team struggled on the defensive side of the ball this season. They allowed 114.1 PPG (21st) and finished the season with a defensive rating of 113.1 (22nd). Oddly enough their biggest weakness came when defending threes taken above the break. They defended the corners well (36.0% oFG%, 3rd in NBA), but got lost when teams shot from above the break (37.1% oFG%, 24th in NBA).

Though not as bad as Brooklyn, Boston’s defense took a dip this year. They finished with the 13th best defensive rating (111.8), but allowed opponents to shoot 37.4% from deep this year (22nd) and loosened up a bit too much on the perimeter. Their rotations were constantly slow and it showed in the results.

The Nets filled their roster to the brim with lethal shooters, so Boston cannot get sloppy on the perimeter. If they fail to tighten up their defense things could get ugly fast. Boston shot 37.2% from above the break this season (7th in NBA) which happens to be Brooklyn’s weakness. If they can look to exploit that, it should give them a solid advantage on offense.

The C’s got swept by the Nets this season, losing all three games by an average of 15 points. However, they inched closer and closer to a victory as the season progressed. Boston only lost by five points the last time the two teams met back on Apr. 23 with Durant and Harden out.

Irving played all three games vs Boston, while his big three counterparts only played one each. Irving averaged 30.7 PPG, 7.7 RPG, and 7.3 APG against Boston. He shot 50.8% from the field and 50.0% from deep in the three games. Durant also found success in the one game he played, putting up 29 points on 9-of-16 FG and 3-of-4 3PT. Harden, on the other hand, struggled shooting the ball vs the Celtics. He scored 22 points on 37.5% from the field and 12.5% from three in his one game against Boston this year.

Tatum dominated Brooklyn in three games. He averaged 29.7 PPG on roughly 51-44-68 shooting splits. Evan Fournier also found success, averaging 13.7 points and shooting 43.8% from deep in three games played between Orlando and Boston. Walker played poorly in his one game against the Nets this year, putting up only 11 points on 5-12 FG and 1-7 3PT.

Brooklyn’s role players got the best of Boston’s this year. Harris (45.0%) and Landry Shamet (50.0%) torched the Celtics from three-point range. Green (11.7 PPG) also found success in his limited role. Outside of Payton Pritchard (10.7 PPG), no one from Boston’s bench provided much help against the Nets this year. Only Pritchard and Luke Kornet shot better than 44% from the field among Boston’s role players.

Marcus Smart acted as Irving’s primary defender this season (10:19 of matchup time). Unfortunately for Boston, Irving put Smart in a blender. He shot 7-14 from the field and 3-7 from deep when guarded by Smart this year. Only two players held Irving to below 40% FG and 50% 3PT this season – Pritchard and Romeo Langford. Neither guarded Irving for very long (2:26 combined).

Brown matched up with Harden more than anyone this year, but beyond that nobody guarded him for more than two minutes. Out of those players, Smart found the most success, holding him to 0-for-2 shooting. As for Durant, Tatum matched up with him most and did a solid job in doing so. Durant shot only 2-5 from the field and 0-1 from deep when guarded by Tatum this season in 2:20 of matchup time.

Walker will act as the x-factor in tonight’s game. The one game he played vs Brooklyn came in March when he went through a rough patch of games. His play picked up tremendously towards the end of the season, so Boston’s success could be dependent on which version of Walker shows up to play. Shamet and Harris, two subpar defenders, guarded him more than anyone this year. If he draws those same matchups but plays like the All-Star version of himself he could be in for a huge scoring night.

Watch out for Boston’s perimeter defense tonight. If the C’s can play with the same energy they had vs Washington, fans could be in for a treat. However, if they defend the perimeter like they were down the stretch of the regular season, the game could be over by halftime. Taking down Brooklyn in a seven-game series is a daunting task. The Celtics thrive as underdogs; it just depends which version of the Celtics show up to the Barclays Center.