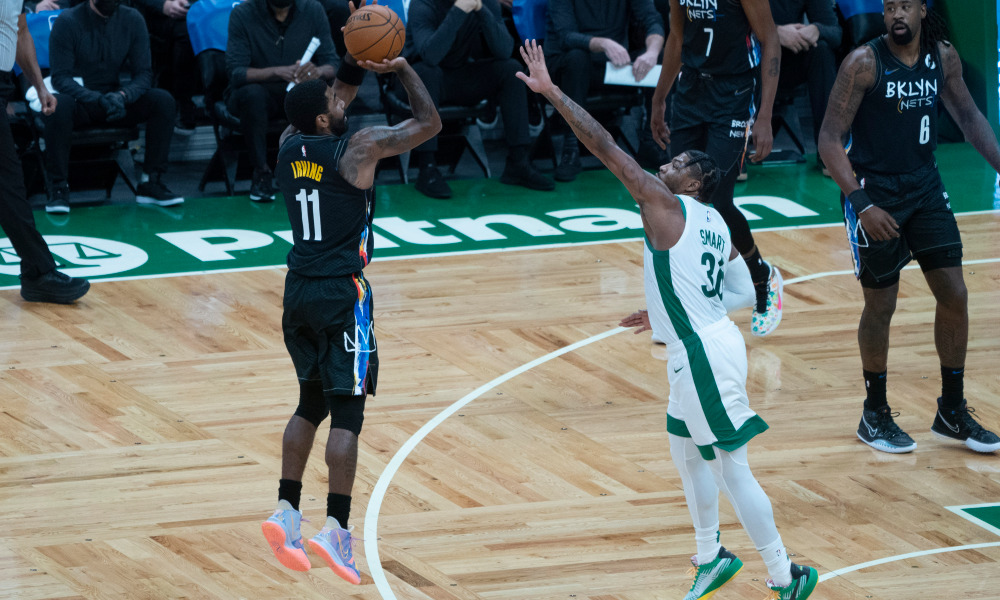 According to the online sports book Betonline.ag, the Suns are 1.5 point favorites.

Brooklyn has quite the injury report. James Harden is still out indefinitely, while Nicolas Claxton (COVID-19 protocols), Reggie Perry (COVID-19 protocols), and Chris Chiozza (wrist) are all listed as out as well. Tyler Johnson is doubtful with a knee injury, and Durant is listed as questionable as he continues to deal with a thigh ailment.

Not to be outdone, the C’s have a fairly lengthy injury report. Kemba Walker (knee injury management), Jaylen Brown (shoulder), and Robert Williams III (knee) are all officially listed as out. Evan Fournier, however, is not listed on the team’s injury report.

Irving leads the stacked Nets roster in scoring, putting up 27.4 points a night (38 PPG vs. Boston). He has also played more games this season (43) than his big three counterparts. Harden has played 34 with the team and Durant has only appeared in 24. Joe Harris and Jeff Green have also played significant roles in terms of scoring, putting up 14.4 and 10.3 points a night, respectively, Bruce Brown has also been an impact player on the defensive end.

With their lengthy injury report, the Nets have been struggling lately. They are 5-5 in their last ten games but still sit at 39-20 on the season. They are tied with the 76ers for first place in the Eastern Conference. They have suffered tough losses to the Chicago Bulls and the short-handed lakers in their last ten.

Kemba Walker has provided a nice spark for the C’s recently, averaging 22.8 points a night over their last five games. Meanwhile, Jayson Tatum is averaging 23.8 over that stretch but has struggled in the team’s last two games. He has shot 3-17 from the field two games in a row. Marcus Smart (13.8) and Payton Pritchard (10.4) round out the team’s double-digit scorers over the last five games.

The Celtics continue to roll after a slight bump in the road against Chicago. They have won eight of their last ten games and sit at 32-27 on the year. They are tied with the Hawks for fifth place in the East, but since they lose that tiebreaker they currently sit at sixth.

If Durant is out, which is the most likely scenario, priority number one will be to contain Irving. Smart did a spectacular job last night on covering Booker and will have to replicate that performance in this one in order to slow down his former teammate. Irving puts up nearly 30 points a game and has been able to lead this team to many victories whilst dealing with injuries.

Tristan Thompson had a productive game last night against the Suns, and with Brooklyn’s lack of depth at center, he will have another chance to shine. Outside of DeAndre Jordan, the Nets will most likely be playing Blake Griffin a lot at center. Thompson can use his size and strength to not only body him in the post but fight for lots of offensive rebounds.

The third, and final, key in this one will be to close out on shooters. Landry Shamet caused Boston’s demise the last time these two teams played each other. The tandem of him and Harris can cause havoc from behind the arc on any given night. The Celtics are going to have to close out on everyone tonight.