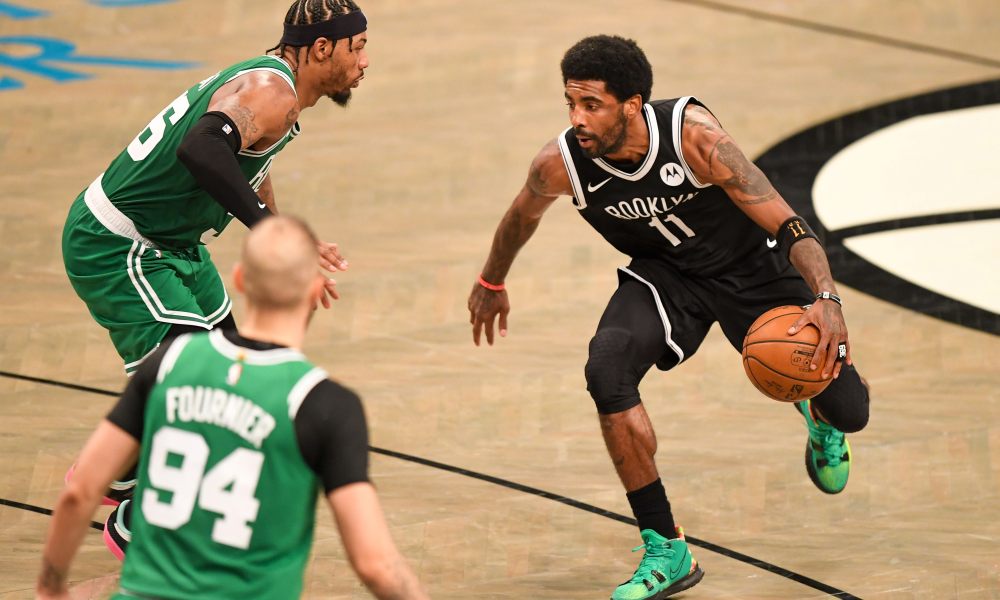 According to the online sports book Betonline.ag, the Nets are 8.5 point favorites.

Steve Nash commented on the status of Jeff Green during his press conference yesterday. According to the head coach, “Green has a strained plantar fascia and will be re-evaluated in 10 days.”

The Celtics added to their injury report as well. Along with Jaylen Brown, the report now lists Kemba Walker as questionable for tonight’s game with a left knee medial bone bruise.

Brooklyn’s “big three” looks to continue their domination tonight. Kevin Durant (29.0 PPG), Kyrie Irving (22.0 PPG), and James Harden (20.5 PPG) each average over 20 points through two games. The trio also combines to average 23 RPG and 14 APG. While Durant (30.0% 3PT) and Irving (27.3% 3PT) continue to struggle from three-point range, the success of their teammates covers it up well.

Joe Harris plays a large part in covering up Durant and Irving’s three-point struggles. He exploded for a 25-point outburst in Game 2, nailing seven of his ten three-point attempts. He averages 17.5 PPG through Games 1 and 2 and is shooting 56.3% from deep on 8.0 attempts per game. Outside of Durant, Irving, Harden, and Harris, no one else on the roster averages more than 6.0 PPG in the series.

Marcus Smart (18.0) leads the Celtics in PPG so far this series. His efficient scoring helped keep the Celtics afloat in Game 1 and provided some semblance of hope in game 2. Evan Fournier also played well in Game 2, scoring 16 points on 5-9 shooting from the field and 4-5 shooting from deep. Smart and Fournier combined to make nine of the Celtics’ 12 total three-pointers in Game 2.

Boston’s primary scoring options struggled throughout the first two games. Jayson Tatum ranks third on the team in scoring, averaging 15.1 PPG on roughly 28-29-85 shooting splits this series. Meanwhile, Walker averages 16.0 PPG this series, shooting 37.0% FG and 30.0% 3PT. Smart, Walker, Tatum, and Fournier rank top four in scoring, while no one else on the Celtics averages in double-digits.

The Nets’ defense looked great in Game 1, but in Game 2 they took it up a notch. Kevin Durant played extremely physical defense on Jayson Tatum, resulting in the superstar scoring only nine points. Whether or not foul calls were missed, the Nets’ goal of “slowing down Tatum” was accomplished. Brooklyn holds the second-highest defensive rating (103.1) of all playoff teams thus far.

The Celtics played solid defense in Game 1, holding the Nets under 110 points. However, the Nets caught fire in Game 2, shredding through Boston’s defense. In the first game, the Celtics’ got a good contest on 53 of Brooklyn’s 84 shots (63.1%). That number decreased to 44 of 88 (50.0%) in Game 2. To make matters worse, the Celtics only contested five of Brooklyn’s 38 three-point attempts in Game 2 (13.2%). This means that 33 of Brooklyn’s threes were either open or wide-open last game.

While the Nets did manage to get hot in Game 2, Boston’s lack of perimeter defense played a huge part in that. The C’s only contested one of Joe Harris’ ten three-point attempts in Game 2. Harris led the league in 3PT% this season and, statistically, the Celtics barely covered him. The Nets assembled one of the most talented offensive teams in the last decade, so a lack of defense is not an option if the Celtics want to make this series competitive.

Boston struggled on both ends in Game 2 but hopes that playing on their home court will help turn things around. The Celtics went 21-15 at home this season and only 15-21 on the road. Jayson Tatum looks like a shell of his regular-season self so far, and a big game from him would certainly boost the offense. Fournier and Smart look solid, so it’s just a matter of the rest of the team stepping up.

Outside of the first half in Game 1, the Celtics dropped the ball defensively as well. The lack of perimeter defense showed in Game 2 when the Nets were able to kill the C’s from deep. Harris may be an amazing shooter, but that’s all the more reason to prioritize contesting his shots on defense. Walker looked lost at times, constantly missing rotations in Game 2, as well. The Celtics’ defense needs to show up or a sweep is imminent.