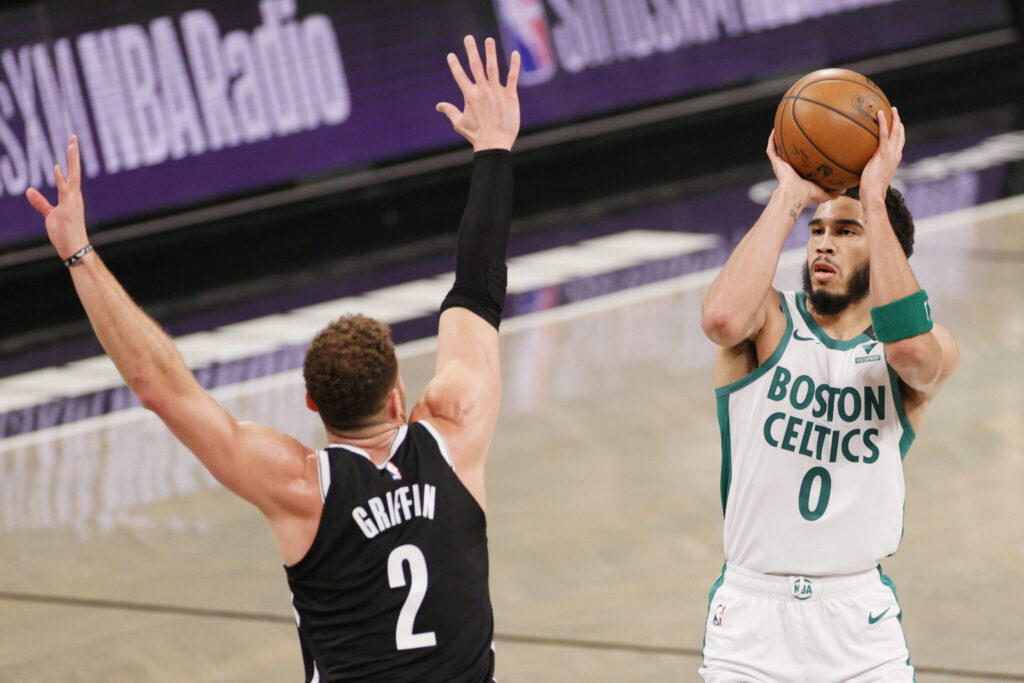 NEW YORK, NEW YORK - APRIL 23: Jayson Tatum #0 of the Boston Celtics shoots the ball as Blake Griffin #2 of the Brooklyn Nets defends during the first half at Barclays Center on April 23, 2021 in the Brooklyn borough of New York City. NOTE TO USER: User expressly acknowledges and agrees that, by downloading and or using this photograph, User is consenting to the terms and conditions of the Getty Images License Agreement. (Photo by Sarah Stier/Getty Images)
Share
Facebook Twitter Email

The Nets are healthy for the first time all season and looking toward their NBA championship ambition. Their regular season finale became a high-flying offensive showcase with alley-oop slams and 123 points over Cleveland to clinch the two seed. Betonline.ag considers the favorite to win it all.

It’s no surprise the Celtics stand as little more than a speed bump on Brooklyn’s path to a championship in the eyes of oddsmakers. The biggest questions for Boston include whether they can win a single game and if their youth will absorb any lessons from the series.

“The odds are against us, we know what we’re up against,” Marcus Smart said today. “We just got to come out there and play … at this point we got nothing to lose.”

Brooklyn’s roster construction does open an opportunity seldom had all season for the Celtics to go wing-heavy and play small. The Nets will primarily feature Blake Griffin at center, which will allow Boston to take its centers off the floor and play Jayson Tatum, Evan Fournier, Kemba Walker, Smart and another shooter together. The problem for Boston is that it’s hard to name that fifth man.

Jaylen Brown will not play in the series. The Celtics’ bench struggled all year, especially when called up to front-line action. They’re also growing thin inside after trading Daniel Theis at the trade deadline and Robert Williams III fell injured with turf toe. He left Tuesday’s play-in game before halftime and did not return or practice the last two days. Williams is expected to try to play in the series, according to Shams Charania, and helped immensely with passing, rim protection and plays on loose balls.

Brooklyn does have defensive questions. Their personnel is ill-equipped to guard Jayson Tatum, fresh off his third 50-point game of the season in a win over the Wizards. He’s healthy, fresh and equipped to make passes out of doubles.

Without Brown, it’s less clear if his teammates will hit them, but Kemba Walker finished the season averaging 29.8 PPG in his final 10 games in a sign he could be equipped to keep each game competitive.

Another problem for the Celtics is that the Nets won all three regular season games in uncompetitive fashion. Brooklyn’s big three did not participate in any game, while Harden and Durant missed the third while Irving struggled. The Nets still won, that night 109-104, and by an average of 15 points.

“It’s really hard to take too much away from the season series, in that we kind of played them with three different teams,” Steve Nash said. “The last few weeks, (Tatum)’s capable of getting 50-60 points … the task is there for us to defend as a team … to be physical … he’s going to be handful.”