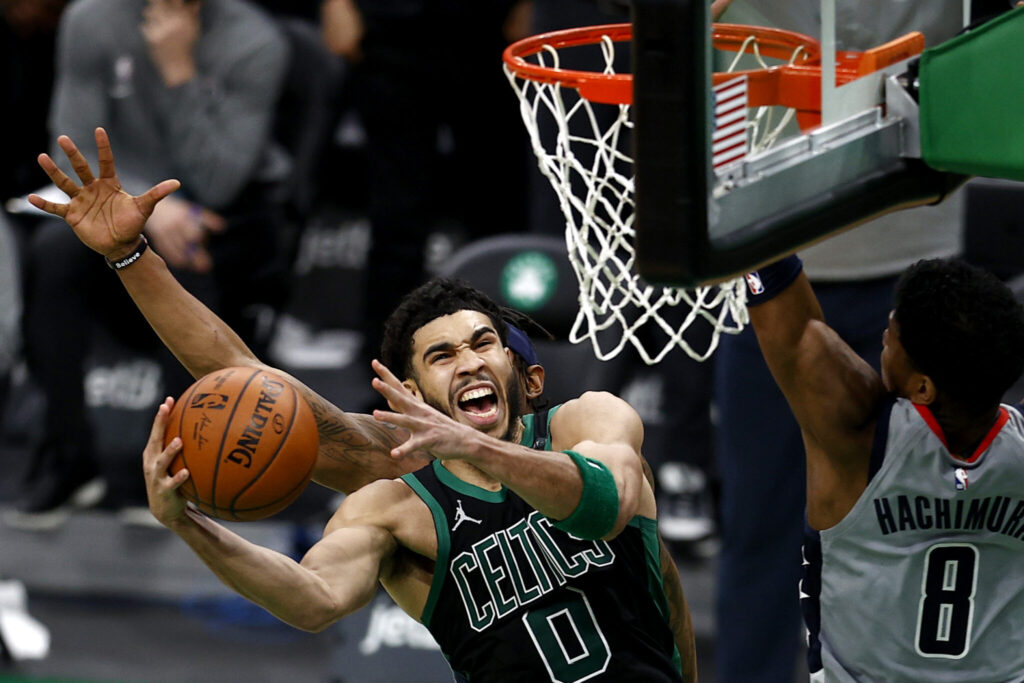 BOSTON, MASSACHUSETTS - FEBRUARY 28: Jayson Tatum #0 of the Boston Celtics shoots the game winning basket during the Celtics 111-110 win over the Washington Wizards at TD Garden on February 28, 2021 in Boston, Massachusetts. NOTE TO USER: User expressly acknowledges and agrees that, by downloading and or using this photograph, User is consenting to the terms and conditions of the Getty Images License Agreement. (Photo by Maddie Meyer/Getty Images)
Share
Facebook Twitter Email

Washington’s injury report lists only three players. Thomas Bryant (torn ACL) and Deni Avdija (broken leg) are out for the season. The report also lists Raul Neto (hamstring) as probable. Though not listed on the injury report, Beal continues to deal with a hamstring injury. He told the media that he plans to play, but “won’t be 100 percent” for the game.

Brad Stevens gave an injury update at his post-practice press conference yesterday. He stated that everyone is healthy and ready to go, but Robert Williams (turf toe) will be a game-day decision. Boston’s injury report lists him as probable. Barring any major setbacks, Jaylen Brown (wrist) remains the only unavailable player for tonight’s game.

Brad Stevens talked about how the Celtics plan to deal with Washington in the upcoming game. He spoke about the duo of Bradley Beal and Russell Westbrook at length:

“They beat you different ways… they’re both a handful in a lot of ways and they’re surrounded by great players… this is a really good team and tomorrow’s going to be really tough… should be a lot of fun and I know our guys are looking forward to it.”

Stevens also commented on the Wizards’ bigs and role players:

“(Daniel) Gafford, (Chase) Hutchinson have both brought great energy, both brought a great paint attack… Gafford’s given them a different look… he is a little bit quicker to the rim and above the rim… that’s a good three guys [Gafford, Robin Lopez, Alex Len] that they can rotate their at the center… we all know the kind of game-changer he [Ish Smith] can be.”

The Wizards have been one of the hottest teams in the NBA in large part due to Russell Westbrook. He averages 25.5 PPG, 13.6 RPG, and 15.6 APG over their last ten games. Bradley Beal finished in second place for the scoring title this season, averaging 31.3 PPG. That two-headed monster combined for nearly 40% of Washington’s points this season.

Jayson Tatum led the Celtics in scoring this season with 26.4 PPG. With Jaylen Brown sidelined, Kemba Walker acts as Boston’s secondary scorer. He averaged 19.3 PPG this season and scored 28.5 PPG over his last six games. Marcus Smart (13.1 PPG, 5.7 APG) and Evan Fournier both play large roles on the offensive end as well. The French swingman averaged 13.0 PPG since joining the C’s at the trade deadline.

Only two players managed to play all ten of Boston’s final games  – rookies Aaron Nesmith and Payton Pritchard. Both provide productive minutes off the bench, averaging 21.6 and 18.6 minutes per game over that span, respectively. Tristan Thompson stepped up in the absence of Robert Williams, grabbing 3.9 offensive boards per game in the last ten games (5th in NBA).

The defensive side of the ball posed an even bigger issue for Boston over that stretch. They guard the restricted area well (62.8% oFG%), but their three-point defense looks horrendous. The Celtics allowed opponents to shoot 38.4% from deep, including 42.4% on corner threes. The C’s also allow 24.0 free throws per game over that stretch (27th in NBA).

Neither side hangs their hat on defense, but the Wizards gain an advantage on the offensive side of the ball. They out-rank Boston in early every statistical category. Their red hot run to end the season put them in prime position for a playoff run. Despite this, Washington scores a lot of their points in the paint, an area the Celtics defend well.

The Celtics and Wizards faced off three times this season, with the Celtics taking home wins in two of them. However, the teams have not played since late February. A lot changed since then. Only Jayson Tatum, Semi Ojeleye, and Payton Pritchard played in all three of the games for Boston.

Brown led the Celtics team in scoring vs Washington (26.0 PPG). With him out, Tatum ranks first in Boston’s scorers in the matchup (22.0 PPG). Kemba Walker also found success in his two games vs Washington, averaging 23.0 PPG. He shot 45.7% from the field and 50% from deep.

Boston’s centers struggled vs Washington’s bigs this season. They combined for 18 points over four total games played, shooting 6-16 (37.5%) from the field. Thompson alone shot 2-of-12 from the field (16.7%) in his two games vs Washington. Robin Lopez and Rui Hachimura killed the C’s, scoring 56 total points on 21-of-38 shooting from the field (55.3%).

Tatum guarded Beal more than any other player on the C’s this season (7:56), but got torched in the process. Beal shot 6-of-11 (54.5%) from the field and 2-of-3 (66.7%) from deep when guarded by Tatum. When looking at available players, only Tacko Fall, Semi Ojeleye, Aaron Nesmith, and Grant Williams held Beal to below 50% shooting. They combined to guard him for under five minutes, with Ojeleye matching up with him the most (1:55, 1-of-4 FG).

The Celtics guarded Westbrook much more effectively than Beal. Although Tatum logged the most minutes on Westbrook this season (7:10), Smart acted as his primary defender. Smart played against the Wizards once this season and matched up with Westbrook for the second-most minutes on the team (4:59). In that time, Smart held Westbrook to 0-of-6 shooting from the field and 0-of-2 from deep.

Beal and Tatum’s friendship goes back years, so the pair always guard each other when the two teams face off. Beal got the better of Tatum when matched up against him this year. He guarded Tatum for a whopping 16:17 this season, holding him to 7-of-18 (38.9%) from the field and 1-of-8 (12.5%) from deep. Tatum managed to score well vs his secondary (Westbrook) and tertiary (Isaac Bonga) defenders this year, however. He combined to shoot 7-of-12 (58.3%) from the field and 2-of-4 (50%) from three against them.

Westbrook guarded Walker more than anyone else on the Wizards and did a great job doing so. Walker shot 0-of-3 from the field and 0-of-2 from deep in 4:58 when matched up against Westbrook this season. However, Walker cooked each of the next three defenders who guarded him. When guarded by Raul Neto, Rui Hachimura and Beal (10:58 total game time), Walker combined to shoot 13-of-15 (86.7%) from the field and 6-of-7 (85.7%) from three.

The real question mark in this series will be Evan Fournier. He averaged 16.0 PPG in two games vs the Wizards this season on roughly 44-30-87% shooting splits. He hasn’t played the Wizards since being a part of the Celtics. When in Orlando, the Wizards guarded him with primarily Beal, who held him to 33.3% shooting. With Tatum and Walker drawing Washington’s best defenders, Fournier’s opportunities on offense become that much easier.

Boston’s ability to defend the paint gives them their best shot at slowing down Washington. Their offense leaves a lot to be desired, but with the team nearly at full strength, a potential breakout game could be in the works.

Losing Brown puts them a man down on defense, but Pritchard and Nesmith both showed the ability to step up when needed on that end of the floor. The matchup poses an interesting storyline – the red-hot Wizards vs the struggling Celtics. While Boston may be favored in the game, their performance in recent weeks shows signs of a team destined for the lottery.