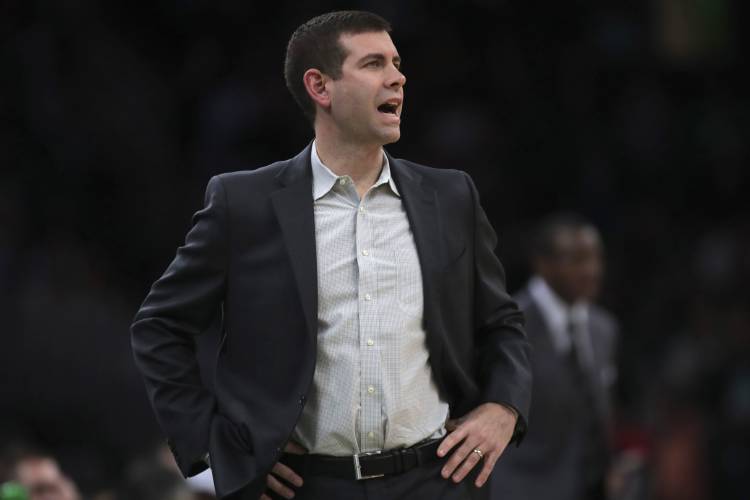 Boston Celtics coach Brad Stevens calls to his players during the first half of an NBA basketball game against the Detroit Pistons in Boston, Wednesday, Jan. 15, 2020. (AP Photo/Charles Krupa)
Share
Facebook Twitter Email

Celtics head coach Brad Stevens spent an entire week reminding everyone how difficult it is to win in the NBA.

A lot goes into grabbing a victory.

From game-planning to effort and execution, Stevens understands what’s at stake when his team isn’t competing at a high level. He watched his team go from losing three straight to adding back-to-back victories to its win column.

The Celtics have found themselves on both sides of lopsided victories of late and Wednesday night they reverted to the wrong end against the Pistons. Detroit shot a season’s best 60.3 percent from the floor en route to a 116-103 win at TD Garden.

With four players scoring over 20 points, the Pistons dominated the Celtics throughout the second half. Sekou Doumbouya led with 24 points, Markieff Morris tallied 23 off the bench, Derrick Rose added 22 points on 11-of-13 attempts and Svi Mykhailiuk tallied 5-of-8 of his 3-pointers on his way to 21.

The Pistons connected on 12 3-pointers and finished with eight fast-break points but it was the high-percentage shots that frustrated Stevens the most. Detroit finished with 50 points in the paint.

Watching the Pistons find their offensive rhythm in and around the paint led to a 21-point second-half lead — that was when the mountain grew too steep for the Celtics to climb.

“The ones we’ll go back and we’ll say, ‘OK, the baskets you can never give away are the cuts, and layups, and the transition where they just get behind you or drive to the rim.’ You always start there,” Stevens said. “I’m guessing they had 20 points on those, maybe more. Right there, you’re probably getting beat in most NBA games. If you give up that easy of plays, then they have to make the tough plays and Derrick Rose was tremendous tonight.

When the Celtics’ lack of intensity on defense came up, Stevens agreed with that notion — it was accurate for some plays. It’s a part of the Celtics’ approach that needs to improve, according to Stevens.

“The other team’s got to take advantage of them and make the plays. They did that,” Stevens said. “But again, go back to transition, the paint, the cuts — we’ve got to get way better or we’ve got to handle that way better on every given night. That’s not something that you’re going to spend a whole lot of time on in walk-throughs and practice, right now. I mean, it’s Game 40 or whatever, (they) got to run back. Got to get back (on defense). So, there were too many of those.”

In the midst of their toughest stretch of the regular season — nine games in 13 days — the Celtics biggest challenge awaits them Thursday night in Milwaukee. Boston will look to return to its winning ways against the Bucks.