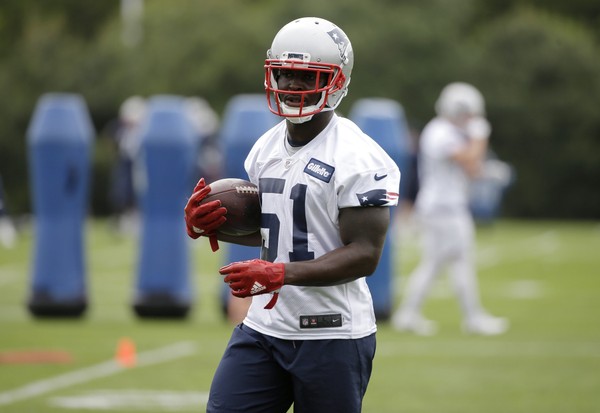 FOXBORO, MA — Patriots running back Sony Michel is reportedly going to be out of action for a while. Just how long remains to be seen.

Michel has missed the team’s last three practices due to a knee injury that requires a procedure, according to The Athletic’s Jeff Howe.

Further details w/more clarity: Michel’s knee injury requires a procedure that’s expected to keep him out of preseason, and perhaps even into the start of the reg season, per 2 sources. So not a major sigh of relief, but the expectation is Michel should contribute this season.

According to Howe, the former Georgia Bulldog is expected to miss the entire preseason and could miss time in the regular season as well.

ESPN’s Mike Reiss is also reporting that Michel will miss time but offers a little more optimism saying that the procedure has already taken place and that the Pats’ running back will miss at least ten days but those close to the situation are not concerned.

Sony Michel underwent the procedure to drain fluid from his knee after leaving Wednesday's practice following a running play. Those close to the situation don't seem too concerned regarding his availability for the regular season, but missing time in preseason is still notable. https://t.co/y7PvKuqUAV

Luckily for the Pats, running back is one of the deeper positions on the roster, but the absence of Michel takes away one of the most explosive weapons in the Patriots’ offense.

Michel led the SEC averaging 7.9 yards per carry in his last season at Georgia and six of his 16 touchdowns a year ago went for 16 or more yards. Michel’s one-cut ability, tremendous burst, and versatility are what made him one of the premier talents in this year’s draft, which led the Patriots to draft him 31st overall.

However, there were red flags about Michel’s knee entering the draft, as former Patriots executive Michael Lombardi sparked concerns of a “bone-on-bone” issue in Michel’s left knee. Michel tore his ACL in his left knee in High School, and he left the 2017 SEC Championship Game early due to a left knee issue. Although, he did return for the College Football Playoff after the injury where he rushed for a combined 279 yards and three touchdowns against Oklahoma and Alabama.

The injury to Michel leaves James White, Rex Burkhead, Mike Gillislee and Jeremy Hill as primary options at running back for the Patriots.

White and Burkhead will likely shoulder most of the load with Hill and Gillislee competing for a roster spot, but it appears that Hill is ahead of Gillislee on the depth chart as of now.

The team also has undrafted rookie Ralph Webb and veteran Brandon Bolden as options as well.