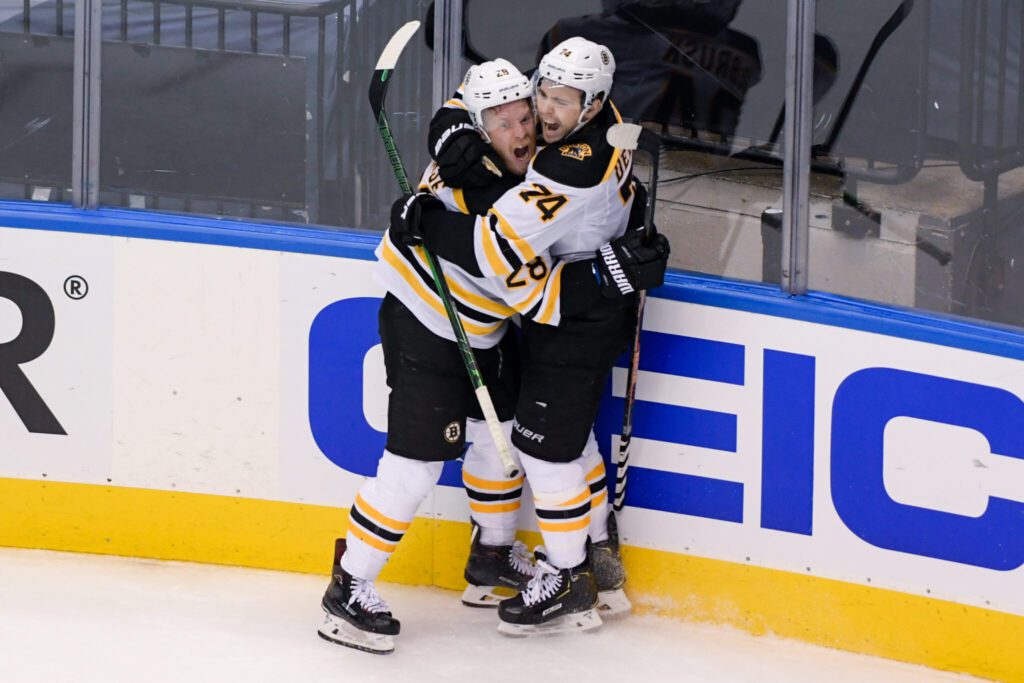 It only took one period. Actually 6 minutes and 51 seconds of one period for the Bruins to turn a lackluster performance into a decisive and series altering win over the Carolina Hurricanes.

The Bruins went down early. Midway through the frame Justin Williams fired a shot past Jaroslav Halak to give the Hurricanes an early 1-0 lead.

Jordan Martinook gave Carolina a 2-0 lead about 12 minutes into the second period, catching Halak off his line. The Bruins entered period 3 down 2-0.

After a number of chances for Boston, Jordan Martinook fires one past Halak to extend Carolina’s lead.

Jake DeBrusk finally got the Bruins on the board with his first goal of the playoffs by beating James Reimer (who started in place of Peter Mrazek) to a loose puck 7:26 into the third period.

An acrobatic hustle play from Jake DeBrusk results in a huge Bruins goal to cut Carolina’s lead in half!

Shortly after, Connor Clifton — noted Canes’ playoff killer — tied the game by scoring his first of the playoffs.

Connor Clifton with a bullet of a one-timer, and we are tied in the third period!

Brad Marchand on the breakaway! The Bruins take the lead with 8:20 remaining!

DeBrusk then tallied his second of the night, Boston’s fourth goal of the game, to give the B’s a solid 4-2 lead.

Jake DeBrusk tacks on an insurance goal! What a third period for Boston!

The Hurricanes didn’t quit, though, after letting the game get away from them. Teuvo Tervainen cut Boston’s lead to 4-3 with the extra skater on the ice… but it was too late.

Teuvo Teravainen cuts it to one late.

The Bruins, after exploding in the third period, have taken a 3-1 series lead on the Hurricanes and have the opportunity to win the series on Wednesday.

Three Stars of the Game

You have to give DeBrusk the first star of the game in this one as he ignited the B’s offense with his third period goal.

The second star of the game, of course, is Clifton, who notched a goal and an assist in the victory.

Finally, Ondrej Kase looked terrific all night. Despite not scoring, he capped off Game 4 with two assists, earning himself third star honors.

Play of the Game

There are plenty of options to choose from for play of the game, but DeBrusk’s second goal of the night stood out… specifically because of the play by his linemates.

The chemistry of David Krejci, Ondrej Kase and Jake DeBrusk is off the charts.

DeBrusk with the finish. Wow pic.twitter.com/L0DHEtbr30

As Evan Marinofsky points out, David Krejci and Kase made DeBrusk’s night a lot easier by handing him the puck and allowing him to get to work.

Shout out to Conor Ryan, who consistently puts out some fire tweets during B’s games.

james reimer vs. the bruins in the third period pic.twitter.com/Z5LhZg37wM

Game 5 between these two teams is set for Wednesday at 4 p.m. ET — buckle up!