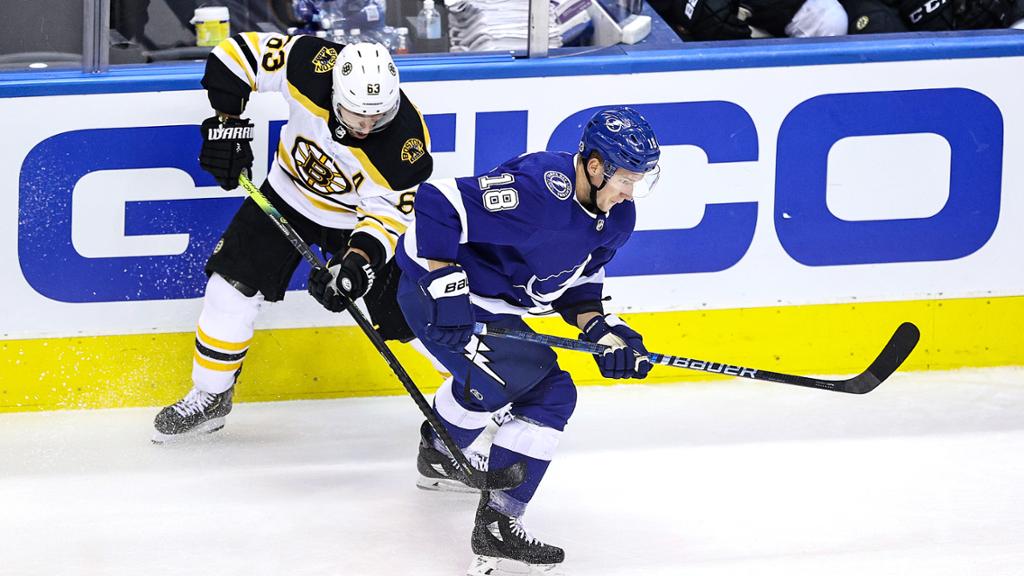 The entire overtime period summed up the game for both the Bruins and the Lightning.

Just based off stats, the Lightning dominated extra time, outshooting the Bruins 9-1 and out-attempting them 13-2. Boston didn’t seem to have an answer for Tampa Bay in the 4:40 of overtime.

They really didn’t hold the answer to Tampa’s onslaught when Brandon Carlo, with time behind the net, wrapped the puck around the boards right back into the Lightning’s possession. Ondrej Palat scored just a few moments later to give the Bolts the 4-3 win and tie the series 1-1.

“We had a puck alone behind the net,” Bruce Cassidy said of what led to Palat’s OT-winner. “We just rimmed it to nobody, so that needs to be better, and then we recovered on the wall and tried to make a play through the middle and that got picked off. We didn’t get it out. I just think we need to manage the puck better in those situations. We didn’t, it has cost us at times in the playoffs, but you know it started with the decision to rim the puck when there wasn’t a lot of pressure.

“It’d be a nice time to put out a fire and make a clean play.”

Whether it be in overtime or in regulation, if we’re talking about putting out fires, the Lightning put out a number of them. The Bruins did not.

Every stat from Game 2 favored the Lightning winning. From start to finish, the Lightning attempted 86 shots compared to Boston’s 54. Tampa Bay led, 15-6, in high-danger chances. According to Natural Stat Trick, the Lightning had an expected Goals For of 3.28 while the Bruins sat at 1.76.

The beauty — or the annoyingness — of hockey is a team can get outshot 75-1 and still win. Obviously it wasn’t that lopsided on Tuesday night, but the better team surely won. The fact the Bruins were able to put up three goals and push the game past 60 minutes came as a surprise.

“I think [the Lightning] had a mindset they were going to pound the puck at us all night, get to the net,” Cassidy said following the loss. “That’s a bit of their makeup with their team this year, may be different in years past they were more line rush, and it’s been effective for them.”

Game 2 showcased some issues with Boston’s overall game and if there’s any team good enough to expose them, it’s the Lightning.

Bruins need better play out of their defensemen

As a whole, the Bruins defensive crew hasn’t been as potent at creating offense as they were during the regular season. It got better towards the end of the series against the Hurricanes, but through two games against Tampa Bay, it hasn’t been there. Add on the Lightning’s big, physical forecheck, and suddenly those plays aren’t there on the breakout or in transition.

“I think our whole D corps has a lot more to give on the offensive side of things,” Cassidy said after Game 2. “We’re not asking to lead the rush, but we need plays from them when they’re there at the o-zone blue line. Tampa is collapsing. We need point shots that are tippable or create rebound situations.”

Outside of Connor Clifton’s occasional put-your-head-down-and-skate-the-puck-until-you-can’t-skate-anymore rushes, the Bruins haven’t had a ton of offense generated from the backend.

That’s an area in which the Lightning have the advantage: Victor Hedman, Mikhail Sergachev and Kevin Shattenkirk are all great puck-movers. How about Zach Bogosian’s beautiful rush to set up Blake Coleman’s diving goal? Bet you didn’t see that one coming.

It also looked as if Carlo and Torey Krug didn’t see that one coming either.

Along with their slick, puck-moving abilities, the Lightning defensemen are big and use that quality to their advantage by making it a struggle for teams to get anywhere close to the net. That’s why teams typically don’t get a whole slew of high-danger chances on them. It’s essential they capitalize on the few they have.

And that’s exactly what happened to the Bruins Tuesday night.

Boston only had six total high-danger chances and five at 5-on-5.

“I thought we had good looks, we just didn’t have the volume attempts,” Cassidy said. “We had point blanks in the slot, Bjork missed, Pasta [missed] a couple times, Wagner, Bergy late. So there were some good looks for us — there just wasn’t a quantity of kind of plays, like our tying goal by Marshy. So we certainly need a little bit more of that.”

As briefly mentioned by Cassidy, Chris Wagner had a golden opportunity early in the second period. David Pastrnak had a chance on Andrei Vasilevskiy from point-blank range.

It’s those kinds of chances the Bruins must begin to capitalize on if they want a chance at moving onto Round 3.

Brad Marchand certainly did that Tuesday night with his two goals while taking advantage of defensive lapses. Even a defense as good as the Lightning’s will have holes poked into it from time to time.

It’s Boston’s job to pounce on those.

One of the real positives coming from this game for the Bruins is they’re now the home team for the next two games and will get last change.

After seeing how Tampa Bay’s top line ate the David Krejci line for dinner, getting favorable matchups will be a top priority for the Bruins.

Up until Game 2, that Krejci line was dominating throughout the postseason. Cassidy and the coaching staff will look to put them back on the right track with better matchups in Game 3.

Expect Cassidy to send out the Sean Kuraly line against Point’s crew in Game 3. If Kuraly, Chris Wagner and Joakim Nordstrom can successfully neutralize Point, Kucherov and Palat — a task they’ve excelled at in the past — Bergeron, Krejci and Coyle would all have matchups that benefit them.

Game 3 of this series will take place less than 22 hours after Game 2. That would not happen in most postseasons.

This year is not like most postseasons. That’s well-documented.

The quick turnaround impacts both teams, but it appears to hurt the Bruins a bit more. The Lightning seemed to have found a winning formula in Game 2, while the Bruins appear to have stolen Game 1 and came oh-so-close to doing the same in the following game.

That still doesn’t seem to be phasing the Bruins too much.

“We’ve got another game tomorrow, a great chance to get ahead,” Kuraly said after the loss. “I don’t know any other way to look at it. We have another game. We like our game plan. We like our team. They’ve got a good team. We’re going to come out and try to play the best we can and get the series back one in our direction.”

The Bruins are approaching this back-to-back as they normally do throughout the regular season.

“It’s going to be a battle,” Marchand said. “We all play back to backs all the time. No excuses come playoffs time. You have to show up and you have to play. You have to find a way to win. just have to rely on the whole group tomorrow. Everyone is going to have to have their best games if we want to compete with that team.”

The aspect of Boston’s game that may be hurt most by the back-to-back is the play in net. Jaroslav Halak has been solid, but Cassidy hasn’t made up his mind yet on whether or not he’ll let the veteran go back in for the second straight night.

The quick turnaround surely won’t help with that choice.