Bruins Scoring Troubles Must be Addressed at Some Point 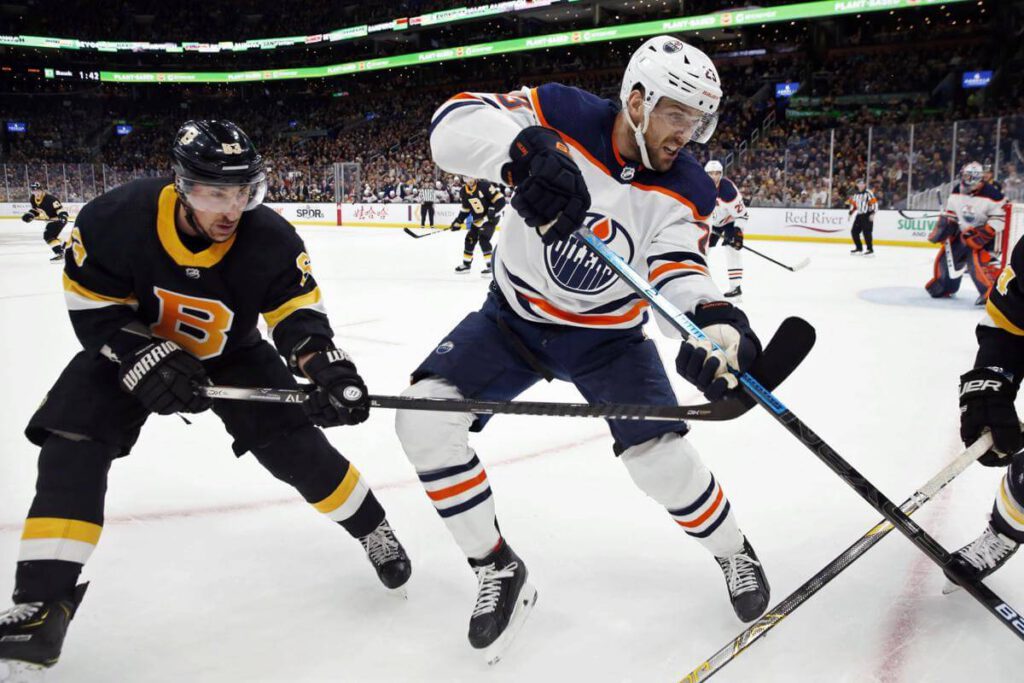 The Bruins could’ve had all the money in the world and they still wouldn’t have had enough to buy a goal on Saturday afternoon.

In the 4-1 loss to the Edmonton Oilers, the Bruins just couldn’t find a way to put one past Mike Smith. Despite multiple pucks trickling through the Oilers goalie and rebounds bouncing throughout the crease like pop rocks on a driveway, the Boston offense just couldn’t put more than one goal on the board.

And that’s been the theme of late.

“I think right now we know the goals aren’t coming easily, so you know it’s gonna be, every goal matters,” Bruce Cassidy said after the loss. “So, I think that’s in everybody’s head. It’s just the stretch we’re in right now.”

In their last five games, the Bruins goal count goes as follows: 3, 3, 2, 1, 1. If it wasn’t for David Pastrnak’s power play goal deflecting off Kris Russel’s stick and over Smith, that final 1 would’ve probably been a zero. The scoring seems to have dried up and it’s not for a lack of trying.

The Bruins absolutely peppered Smith in the third period, sending 21 pucks his way. Time after time the B’s got quality chances and just couldn’t finish. With just under four minutes to play in the game, Par Lindholm received a pass from Torey Krug right in the Edmonton slot. He turned and fired one that was blocked away by Smith from point-blank range.

Midway through the final 20 minutes, Brad Marchand threw one toward the Oilers net on a 3-on-2. The pass was intended for David Pastrnak driving to the far post, but hit an Edmonton defenders skate and slipped through Smith’s legs and behind him.

The only problem: it snuck right past the post.

“I don’t think you can get frustrated,” Bergeron said of the lack of scoring. “I think it’s the last thing you want to do. It’s a tough league. There’s going to be times when things like that happen and it’s about rolling up your sleeves and getting to the net.”

Bruce Cassidy certainly tried everything he could muster up to get the scoring touch back in the hands of his forwards. He went to extreme levels in jumbling up the lines.

During the second period, he strung together Anders Bjork, Charlie Coyle and Pastrnak — a skater from each of the B’s top three lines. Coyle started the third period with Patrice Bergeron and Brad Marchand.

David Krejci had turnstiles on both sides of him throughout Saturday’s game — he started with Jake DeBrusk and Charlie Coyle, moved onto play with Bjork and Danton Heinen, and then skated in between Heinen and Pastrnak.

In total, the Bruins had eight different forward trios. The only line that stayed together from start to finish was Joakim Nordstrom, Chris Wagner and Sean Kuraly.

“Yeah he knows the best,” Krejci said of Cassidy switching up the lines. “He’s trying to get us going. Sometimes that means that we have to change the lines a little bit. It’s up to us to feed off it and create some energy, some good chances, have a good shift and the next line comes one. Build on that and keep rolling.

“You do need that once in a while for the lines to change.”

The only Bruins not with the names Bergeron, Pastrnak, or Marchand draped across the back of their sweaters who’ve scored over the past five games are Joakim Nordstrom, Brandon Carlo and DeBrusk twice.

Sub-par goaltending has been what the Bruins have come against over the last five contests. They faced Linus Ullmark twice, Mackenzie Blackwood, Elvis Merzlikins and Smith, who’s been notoriously bad at TD Garden over the course of his career.

Number of goals in those games: 10.

The glaring need is on Krejci’s right side, as it has been for what feels like dog years now. Tyler Toffoli, Chris Kreider and Kyle Palmieri would all look sharp in black and gold. They wouldn’t come cheap, but they would save Cassidy headaches from having to jumble the lines around to spark scoring in spring 2020.

Mixing the lines every which way and taking 21 shots in the third period for a grand total of no goals was a cry for help from the Bruins on Saturday afternoon.

They need scoring help and the clock is ticking.