The Cavaliers dominated from three and in the paint on their way to 132 points in an overtime win over the Celtics, whose defense fell to No. 26 overall. 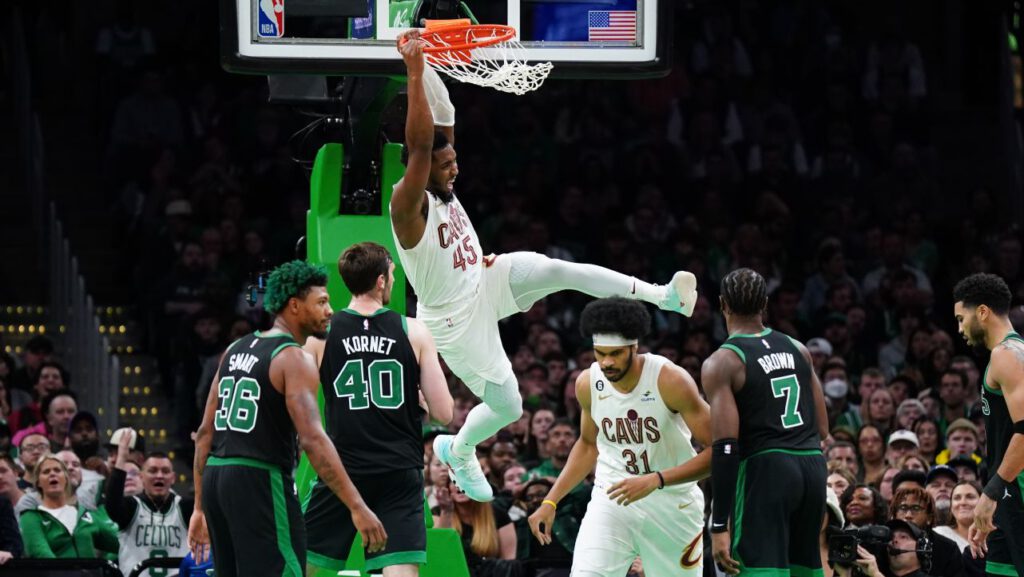 BOSTON — Donovan Mitchell warmed up early, unloading five shots around the elbow in the first half against a Celtics defense aiming to lure opponents into jump shots. He only hit two mid-rangers, while shooting 1-for-3 from deep and taking four shots around the rim, a win for Boston. The Celtics led by 15 at halftime having switched from small ball to double-big lineups with Luke Kornet and Al Horford playing in a deep drop.

Kornet started the second half in place of Derrick White, who got targeted early by Evan Mobley and Jarrett Allen. Mitchell showed no added hesitation attacking Kornet after halftime, unloading a one-handed slam on his head minutes into the third quarter, then finding Caris LeVert and Kevin Love for threes and quickly erasing Boston’s advantage. He raced past Kornet with his back turned and the Celtics’ defense arriving late in transition to tie the game late in the fourth quarter on an aggressive two-handed flush — going on to lead the Cavaliers to a 132-123 win in overtime with 41 points.

“Giving (our guards) space gives them opportunity,” Cavs head coach J.B. Bickerstaff told CLNS Media after. “So if they want to be back, now those guards are dictating because they’re attacking. You automatically create a 2on1 because that guard can get downhill. We’ve got dump offs, but again, it gives our guards opportunities to make shots. The analytics of the game tell you those pull up 2s are going to be bad shots, but if you got guys like Donovan and Caris who can knock that down, I think that becomes a good look for us.”

Cleveland finished the night 5-for-12 on mid rangers, but still found a way to break open what had been the league’s interior defense. The Cavaliers shot 12-for-14 inside five feet and 16-for-35 from three, including one following a critical offensive rebound where LeVert raced inside uncontested and gathered the ball on the perimeter before pulling up for three. Malcolm Brogdon fought for a defensive rebound along the baseline after Horford got out on Mitchell on an attempted game-sealer from the elbow, sending Jaylen Brown out for a go-ahead layup. Allen easily reached the free throw line and forced overtime on the next play attacking Horford.

LeVert matched Mitchell’s 41 points, blowing by Marcus Smart late on a miscommunication talking through a Mitchell ghost screen. That cut the Celtics’ lead to four with less than three minutes to go, while Brown and Smart botched another switch allowing Mitchell to open overtime with an open three. Mobley scored over Kornet, who started overtime, with little trouble before LeVert erased Brown’s personal 5-0 run to tie the game with a pull-up three over Smart above the break.

“I think we just have to execute, I don’t know if it’s a trend or an issue,” Joe Mazzulla said. “We were winning the game, and so we had a chance to win the game. We didn’t close out on certain possessions, so I don’t know if it’s as much of an issue as it is just being more consistent on both ends of the floor and not relaxing and just understanding we have to earn every win.”

The Celtics, nonetheless, fell to 26th in the league in defensive rating (117.9) and a -0.8 net rating per 100 possessions through a 3-2 start with Friday’s loss, marking their third straight game allowing at least 120 points. Scoring is up significantly around the league to start this season, but Boston never allowed more than 112 points per 100 possessions in a month last year. Mazzulla wanted to turn the team’s focus toward offense in camp, and they’ve scored 117.1 points per 100 to become a top-five offense. Even a week of defensive emphasis couldn’t rejuvenate the force the Celtics played with in their own end last season.

Grant Williams missed Friday’s loss due to suspension and Robert Williams III remains out, only shooting free throws so far in his recovery. The Celtics got by in the postseason with Williams III mostly absent though, posting the same 106 defensive rating they did during the regular season. They’ve adjusted their scheme, switched less aggressively, turned opponents over at a bottom-five rate and only managed two blocks on Friday as the Cavs hammered the interior.

The drop hasn’t worked for the Celtics yet as they wait for opponents to cool off on jump shots. They’re waiting for teams to come to them, reacting to screens, dribble penetration, early offense and again arrived late to pick up points after a week where Mazzulla emphasized them. Cleveland arrived all too happy to claim the open jumpers.

“That’s kind of the tough part about it. Mitchell and LeVert tonight, they did a great job of taking those shots and making them,” Kornet told CLNS. “If there’s certain ways to curtail it a little bit, I’ll definitely try to do that. I feel like a lot of that is if the coaching staff wants me to change something in terms of pick up points and other stuff we can do, then we’ll make those adjustments. You kind of have to determine on a large scale whether it’s really the thing working or not, and I think they’ve done a great job of making the shots in the last couple of games.”

“We did a good job of fighting through screens and things like that, making it tougher, and they obviously made some shots, it’s going to happen, but they also missed some and didn’t get looks altogether. It’s usually an easier place to guard out of kick outs and things like that. It’s a hard thing to know exactly how that exact part of the pick-and-roll stuff is going in a single game, because you don’t know all the possessions that they don’t shoot or stuff happens and all that, but our staff will look at that and determine.”