Al Horford faced his old team Saturday, with teammates and coaches still impressed by his short stint. Boston can thank the Thunder for a rejuvenated Al. 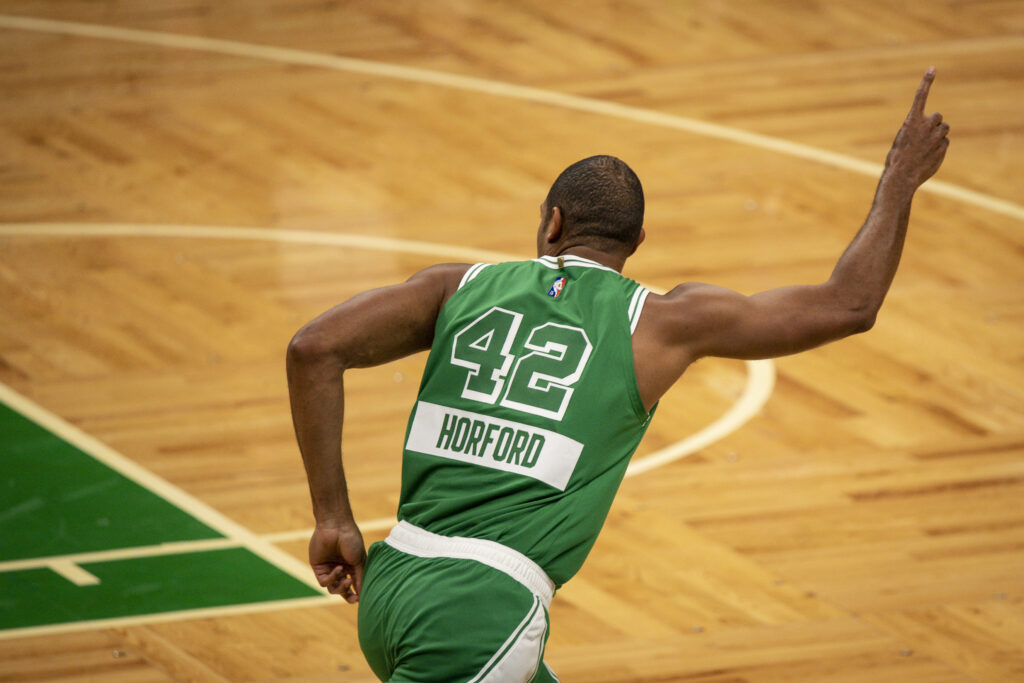 BOSTON, MASSACHUSETTS - NOVEMBER 19: Al Horford #42 of the Boston Celtics reacts during a game against the Los Angeles Lakers at TD Garden on November 19, 2021 in Boston, Massachusetts. NOTE TO USER: User expressly acknowledges and agrees that, by downloading and or using this photograph, User is consenting to the terms and conditions of the Getty Images License Agreement. (Photo by Maddie Malhotra/Getty Images)
Share
Facebook Twitter Email

Al Horford came to Oklahoma City as a salary dump from the 76ers, who had signed him away from the Celtics a season prior. Horford, back in a Celtics uniform on Saturday, faced his old Thunder squad for the first time, rejuvenated and in some ways playing better than he did during his first stint in Boston. He subtly posted 10 points, 11 rebounds, seven assists and a block in his team’s 111-105 win over OKC, likely qualifying for an NBA All-Defense team if the season ended today.

The Thunder still rave about the Horford experience, even though he only played 28 games with the team. A rebuilding group, not necessarily trying to win, saw the first glimpses of Horford’s post-Philadelphia resurgence and sat him down for the season in favor of younger players. Oklahoma City started 5-3 and finished 11-17 in games Horford played, where he averaged 14.2 points, 6.7 rebounds and 3.4 assists with a steal and block per game. OKC allowed 6.7 fewer points per 100 possessions with Horford in (93rd percentile), then put him on ice for an eventual trade with the Celtics that both got Boston out from Kemba Walker’s contract and solidified their ailing defense.

“He’s engaging these guys on really basic concepts and nothing’s beneath him,” acting Thunder head coach Dave Bliss told CLNS Media Saturday. “So being willing to have those conversations, and wanting to have those conversations, he was kind of like our team dad. Putting an arm around guys when they need it, but also challenging the guys when the level of performance wasn’t high enough. So he’s got a really good blend there, and I know Al has four kids and I’m sure he’s a great dad, so you can see the skills that just he has as a man and as a person … I got to imagine he’s been a huge benefit for not only young guys, but even the other veterans on the (Celtics) roster.”

Horford, now 35, explained both the difficulties the Philadelphia and Oklahoma City experiences presented him in his opening weeks with the Celtics. His family cheered the news of a return to Boston when they found out. It gave Horford, too, a greater appreciation for his Celtics experience. His time in Oklahoma inspired him to become more vocal and emphasized the need for him to work with younger players. The Thunder boasted an average age in line with some college programs (22.8).

That put the veteran and team on two different timelines, as Sam Presti, the Thunder brass and Horford decided to move on in March. The two sides couldn’t come to terms on a buyout, so he sat for the rest of the season, before new Celtics president Brad Stevens quickly moved a first-round pick with Walker for Horford as his first move, one undoubtedly aided by Boston’s familiarity with the big and Horford’s desire to return where he truly belonged. Two years and ample change in Boston and for Horford brought them full circle.

“That was a huge age gap,” Horford said earlier this month. “It really put into perspective for me how much the league has changed … to their credit, they were very receptive, they were very willing. I definitely know even more when’s the right time to talk, pick my spots, but mostly leading by example, how hard I’m working, watching film, taking care of my body. Doing all those those things and getting them to ask questions about that, and having good, healthy talks.”

Horford honed in on his nutrition, practice schedule, treatments and lifts, utilizing data for performance, while the Thunder involved him in those conversations. Not playing between March and September likely helped Horford too, resting regularly following an early playoff exit with Philadelphia. Walker also went on to praise the hands-on approach Oklahoma City took with his knee, especially considering the organization would never play him in a game, releasing him during the offseason.

Horford ultimately entered Celtics training camp fresh, feeling better than he had in years. He played in front of no fans or family in OKC amid the pandemic. His first preseason game back at the Garden featured a raucous crowd through a comeback win, many of them experiencing their first game in over one year.

“Al’s a great leader, great vet to have around, he’s always doing the right thing, he’s always trying to help everyone on the team, not just the younger guys,” Shai Gilgeous-Alexander told CLNS Media. “He was obviously a blessing to be around, he’s been in the league a long time, he’s done some great things and he’s seen a lot of things. It helped us last year. Obviously, it’s the business of the NBA, but you always build bonds with teammates, especially when they’re such good teammates, and it always sucks to see them go.”

Amelia Vega, the former Miss Universe and Horford’s wife, never understood how his age became a big deal during his last two stops, which Horford points back to becoming a topic during his first Celtics stint when he entered his 30s. What’s old in the real world versus in an NBA growing younger each year toward the inevitable return of prep-to-pro are two different things. Horford defended Evan Mobley earlier this week, who was three when Horford began his career at Florida. He held the rookie of the year candidate to an 0-for-10 start Monday.

Josh Giddey, the Thunder rookie who scored 15 points in Boston on Saturday, was born in 2002, when Horford was 16. Horford is among 19 NBA players who are 35 or older, compared to 76 players 21 or younger. It hasn’t diminished his defense though, as he ranks among the top shot contesters (2nd), shot-blockers (5th) and defensive rebounders (16th in DREB%) with opponents struggling to shoot against him (42.1%).

“He’s been one of our best on the year in a lot of different ways,” Udoka said. “We talked about his consistency, his veteran leadership, what he’s doing defensively. He’s probably been our most solid team defender, and we’re asking him to switch onto guards at times, protect the basket at times. The leadership, the veteran savvy that he brings our group, I had him in Philly a few years ago, then I keep mentioning him OKC playing half a season, how refreshed he looks, came into camp in great shape and motivated to come back to Boston. So he’s been great for us and played a lot of minutes and done a lot of great things.”

Some aspects of Horford’s game have declined. His touch and lift around the basket appear less consistent, while his five-year run of 37% three-point shooting, emerging as one of the best marks among bigs in the league, fell off into a 28.3% mark early this year. Boston hasn’t ruled him out of back-to-backs, but did rest him on Saturday in Cleveland. Robert Williams III, Horford’s former protégé, gives Boston some room to do that.

Williams III may have been more excited than any Celtic to welcome Horford back, attributing personal and professional growth to watching Horford as a rookie when Williams III rarely played. Horford continued to coach him through camp, emphasizing saving his practice dunks for games and pacing himself. Now, he’s one of the fastest-growing young centers, playing more minutes per game, fouling less and playing next to his mentor in the starting lineup, one of the most dominant defensive group in basketball before Brown went down.

That raises questions about what could’ve been in the Bubble if Horford stayed, but also possibilities this year and into the future. He believes he can continue to play for a long time, and next to young stars Jaylen Brown and Jayson Tatum the same pressure to produce like a max player doesn’t exist. Everyone knows why Horford is here this time and both he and the fans are happy, greeting Horford off the bench to applause in his October return.

A trade some viewed as simply a money-saving move by Boston saved the Celtics’ defense, with Horford ranking 20th with a 102 defensive rating among NBA players averaging over 29 minutes per game. The Celtics rising above .500 on Saturday returned him to a familiar place, winning.

“I’m a little biased, because my memory of Al was trying to take away that right-hand jump hook while he’s shoving his left elbow in your chest in college,” Bliss said. “I just always had a ton of respect for him. Never actually knew him until last year, so really cool to be able to cross paths that way … I think the humility piece with Al, he’s obviously accomplished a ton, multiple-time all star and has won a lot in his career. I think last year might’ve been the first time he missed the playoffs in his career.”