The Boston Celtics trounced the Memphis Grizzlies in their regular season finale 139-110 to finish the season as the 2 seed in the East. 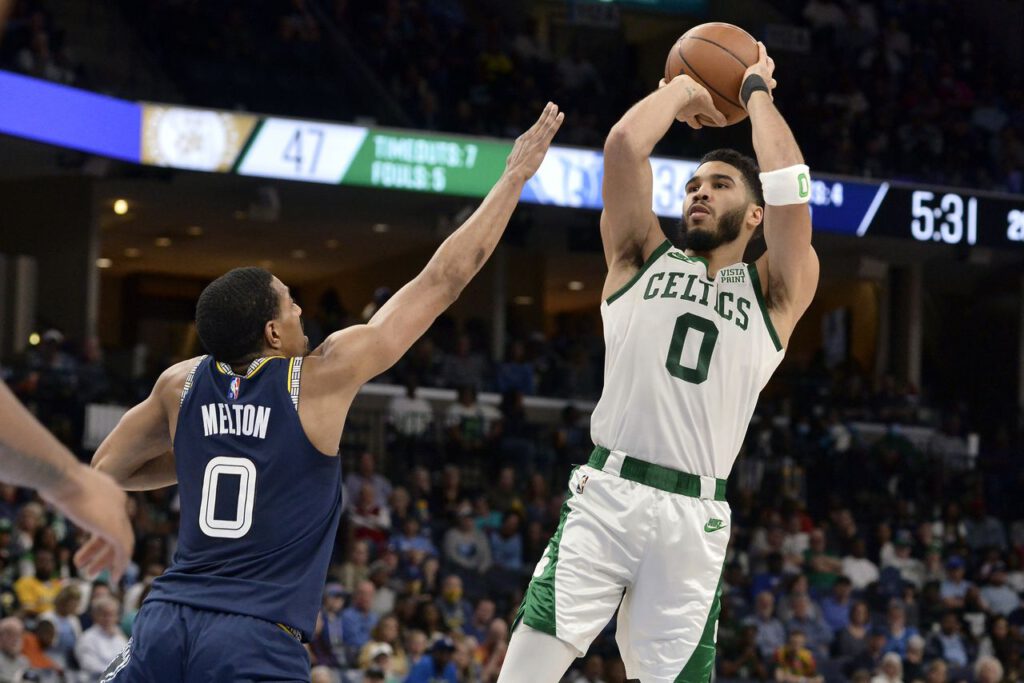 The Boston Celtics finished the regular season with a bang as they blew out the shorthanded Memphis Grizzlies 139-110 on Sunday night. The Grizzlies, who already have the two seed in the West, rested all five of their starters including All-Star point guard Ja Morant. Jayson Tatum paced the Celtics with 31 points.

The win, coupled with a Milwaukee Bucks loss earlier in the day locked the Celtics into the 2 seed in the East. That means the Celtics will play either the Brooklyn Nets or Cleveland Cavaliers in Round 1 of the playoffs. Brooklyn (7) and Cleveland (8) will play on Tuesday with the winner getting the 7 seed and a date with Boston. The loser will play the winner of the 9/10 play in game to see who locks up the 8th and final spot.

The Celtics are 3-1 against Brooklyn this season, although two of the wins came when the Nets were missing their star players Durant and Kyrie Irving. Both the Nets stars played against the Celtics in their last matchup on March 6th. Jayston Tatum had 54 points in the game to lead the Celtics to a 126-120 win.

One interesting aspect of a potential first round matchup with Brooklyn is the possibility of three-time All-Star Ben Simmons taking the floor for the first time this season. ESPN reported that Brooklyn is optimistic Simmons might play in the first round even in a limited role.

As for Cleveland, the Celtics lead the season series 2-1 but the two teams haven’t seen one another since December 22. Cleveland has been battling injuries all season with. All-Star big man’s Jarrett Allen could miss the play in game against Brooklyn with a hand injury. If the Cavs lose to Brooklyn, they get one more shot to advance to the playoffs, hosting the Atlanta-Charlotte winner in the final play-in game on Friday night.

Running from the Raptors?

The way things set up for the Celtics they had a choice entering Sunday’s game. Go for the win and lock up the 2 seed and a potential nightmare matchup with the Brooklyn Nets. Or, play the G-leaguers and possibly lose and fall to the 3 to play Chicago, or the 4 seed to take on the 5th seeded Toronto Raptors. A loss and a Philly win would have locked Boston into the 4 seed and a 1st round date with the red hot Raptors.

In addition to Toronto playing like one of the best teams in basketball over the past month, there is still uncertainty over the vaccination status of certain Celtics players. Recent reports indicated multiple Celtics frontline players were not vaccinated and would therefore not be eligible to play in Toronto due to Canada’s vaccine mandate.

Al Horford recently told the Boston Globe he would be “ready to go” though stopped short of saying the words ‘I am vaccinated.’ Jaylen Brown’s status is bit murkier. Brown has yet to confirm whether he is vaccinated and danced around the question last time he was asked.

There is no way of knowing if the Celtics intentionally maneuvered away from Toronto for any reason. Head coach Ime Udoka insisted after the game that the Celtics were not concerned with seeding or opponent .

“We’re not worried about the other teams or any of that,” Udoka said. “We’ve done what we’ve done. We’ll let other teams use their own strategy, and we’ll just try to be the best we can, go against whoever, and we’re ready for that.”

“We’re not trying to dodge anybody, we believe in ourselves,” Payton Pritchard added after the game. “Go in and whoever we play, we’re going to be ready.”

Time Lord Ahead of Schedule?

It was assumed the Celtics would be without Center Robert Williams for at least the 1st round of the playoffs, but the recent rhetoric coming from the C’s has been increasingly optimistic in recent days.

Williams already has started ramping up his two-a-day workouts and has been in great spirits since the procedure back on March 30th.

“Everybody reacts differently so can’t anticipate a date,” Udoka said Sunday ahead of his team’s 139-110 win over the Grizzlies in the regular-season finale. “But barring any setback or swelling or anything like that, we hope to have him back sooner than later.”

Williams initial timeline had him out 4-6 weeks which would have eliminated the first round and possibly most of the 2nd as well. There was always a feeling that Williams would return on the earlier end of that estimate. Udoka believes it could be even sooner than that.

“The 4-6 week timetable is what it is,” Udoka said. “But guys will come back in three and stuff. Like [Bulls forward] Javonte Green was here and came back in three weeks and jumping out of the gym still. So everybody kind of reacts to it differently and so we’re not ruling him out because of that, but as I’ve said, we anticipate playing the first round without him.”