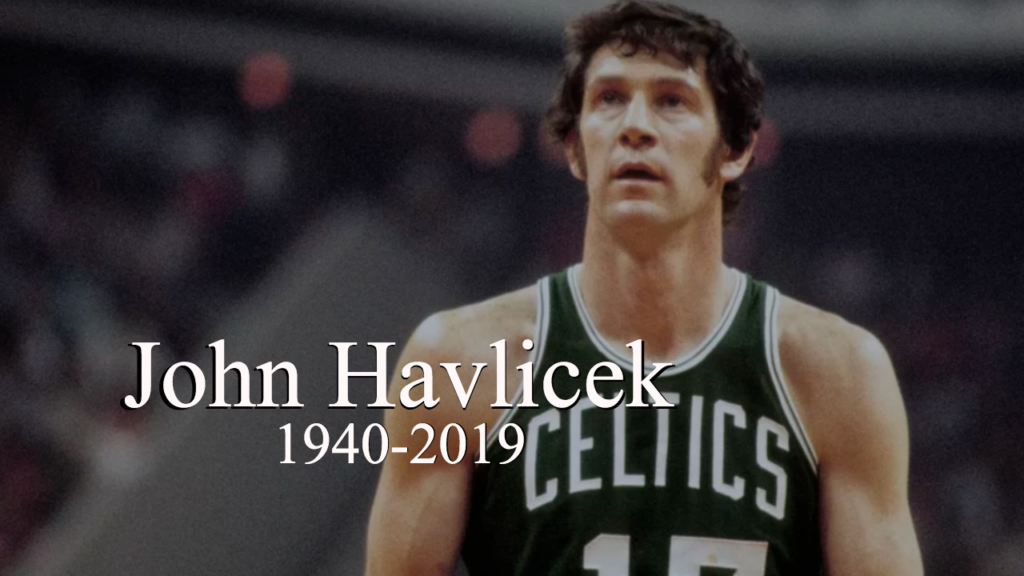 Celtics fans everywhere tonight mourn the loss of one of the true legends to ever wear the green and white. John “Hondo” Havlicek died on Thursday at the age of 79. Havlicek had been suffering from Parkinson’s disease and his health reportedly took a turn for the worse in recent weeks.

For 16 legendary seasons, John Joseph Havlicek defined on-demand scoring for the Celtics, sixth-man versatility, perfection in the NBA Finals and one of the most clutch plays in NBA history.

Born April 8, 1940 of Czech descent on his father’s side and of Croatian descent on his mother’s, John Havlicek won eight NBA titles with the Celtics, including four in the first four seasons of his pro career.

In NBA history, only teammates Bill Russell and Sam Jones won more championships than Hondo during their playing careers. Havlicek is one of three NBA players with an unsurpassed 8–0 record in the NBA Finals.

Havlicek is considered one of the greatest players and athletes in the history of the game and was inducted as a member of the Naismith Memorial Basketball Hall of Fame in 1984. He was a three-sport athlete at Bridgeport High School in Bridgeport, Ohio. Choosing to stay close to home and play college basketball with Jerry Lucas at Ohio State, Havlicek played on a team with future coaching legend Bobby Knight as a reserve and won the 1960 NCAA title. He was named as an alternate to the 1960 Olympic Games United States Team.

Havlicek was drafted by both the Celtics and the NFL’s Cleveland Browns in 1962. After competing briefly as a wide receiver in the Browns’ training camp that year, Havlicek turned his focus to the NBA. He earned a reputation was one of the most conditioned athletes in the game and focused his energies on playing for the Celtics, with head coach Red Auerbach later describing him as the “guts of the team.”

Inspired by the 1953 John Wayne movie of the same name, Havlicek was christened “Hondo” by Celtics teammates and fans alike, and promptly revolutionized the “sixth man” role.

But the singular moment that defined his career came in the closing seconds of the 1965 Eastern Conference finals against the archrival Philadelphia 76ers.

In the decisive Game 7, played at Boston Garden, the Celtics led the Philadelphia 76ers 110–109 with five seconds left, and only needed to inbound the ball underneath their basket to secure the victory and advance to the NBA Finals.

However, when Bill Russell’s pass struck a basket support wire hanging down, the turnover gave the 76ers and Wilt Chamberlain the ball and a chance to win the game – and the series. Hal Greer was set to throw the inbounds pass for the 76ers. Havlicek stood with his back to Greer, guarding Chet Walker. But as Greer’s pass came inbounds, Havlicek spun, leaped and tipped the pass to Sam Jones. Legendary broadcaster Johnny Most forever immortalized the moment by proclaiming “Havlicek stole the ball! Havlicek stole the ball!”

Veteran referee Earl Strom called Havlicek’s reaction one of the greatest plays he ever saw in his 32 years as a professional official.

Havlicek shares the NBA Finals single-game record for most points in an overtime period (9 in a May 10, 1974 game vs. Milwaukee) and was named NBA Finals MVP that year.

While Havlicek’s steal was one of the greatest moments in NBA history, he also had a direct role in what many consider the greatest game in NBA history on June 4, 1976. In the second overtime of Game 5 of the 1976 NBA Finals vs. Phoenix, Havlicek made a leaning, running bank shot that appeared to be the game-winner, as fans spilled onto the floor. As Havlicek’s shot went in with one second left, Phoenix was allowed one final shot after Jo Jo White converted the technical foul shot for Phoenix’s illegal timeout. Gar Heard scored to force the game’s third overtime. The Celtics went on to win the game in triple overtime, 128-126.

Aside from being a great sixth man at the start of his career, Havlicek became known for his ability to play both forward and guard, his relentlessness and tenacity on both offense and defense, his outstanding skills in all facets of the game, his constant movement, and his tireless ability to run up and down the court. As a result of his endurance, he was a devastating fast-break finisher, one who could suddenly score in bunches when his Celtics team would shut out the other team and grab defensive rebounds.

Although he did not have a high field goal percentage, he was a clutch outside shooter with great range. He was also the type of player who would do what it took to help his team score a victory, such as grab a crucial rebound, draw a charge, come up with a steal in a key defensive moment, or settle the team with a clutch basket or assist. In 1974, Russell summed up Havlicek’s career by saying “He is the best all-around player I ever saw.”

A thirteen-time NBA All-Star, Havlicek retired in 1978 and his number 17 jersey was immediately retired by the Celtics. At the time of his retirement, Havlicek was the NBA career leader in games played (surpassed in 1984 by Elvin Hayes and now held by Robert Parish) and third in points behind Chamberlain and Oscar Robertson. Havlicek also retired as the career leader in field goal attempts (later surpassed by Kareem Abdul-Jabbar) and missed field goals (later surpassed by Kobe Bryant). Havlicek is now 26th, 15th, 6th and 2nd, respectively, in those stats.

Havlicek is survived by son Chris, who played collegiate basketball for the University of Virginia in the early 1990s and daughter Jill, who married retired MLB outfielder and current MLB coach Brian Buchanan.