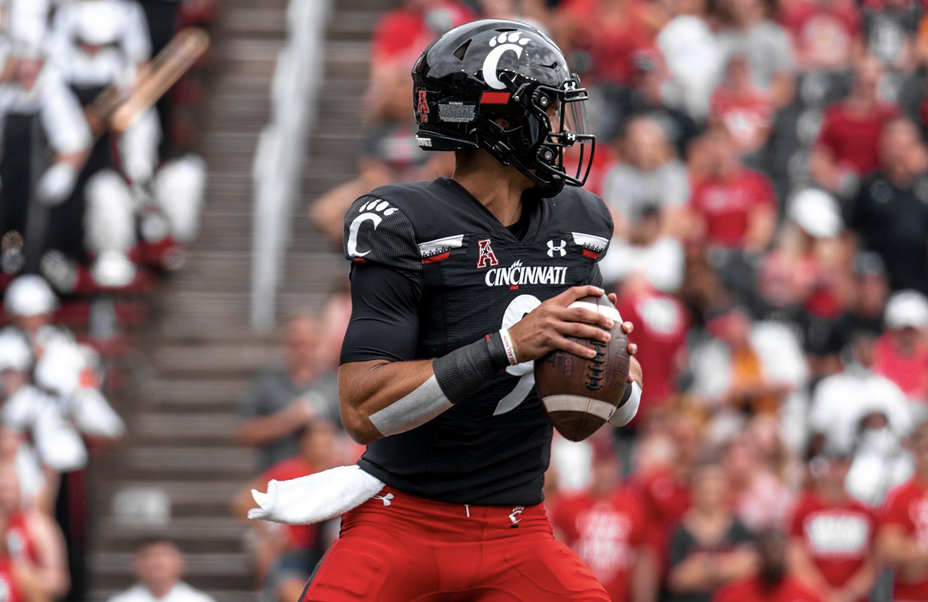 CINCINNATI – The game itself was secondary Saturday at Nippert Stadium. The result was pretty much a foregone conclusion.

Before an energized and electric crowd of 37,978, the eighth-ranked Bearcats came out and showed why they are considered a legit playoff contender and Desmond Ridder showed why he plans on putting his name in the hat for serious Heisman consideration when all is said and done in December.

Ridder was 20-of-25 for 295 yards, four passing touchdowns while running for another to lead Cincinnati to a 49-14 win over their most historic rival Miami in the 125th battle for the Victory Bell. Ridder did throw one interception in the third quarter that required an acrobatic catch near the sideline to ruin what would’ve been an otherwise pristine day of throwing. For the first time since 1953, the series is tied, 59-59-7. Miami has not trailed in the series since 1916.

“Part of what we said on offense is be ‘Code RED’, and that’s relentless, explosive and disciplined,” Ridder explained. “And obviously, as you saw, I felt we put that on display today. That’s what we like to see from our Code Red offense, week in and week out.”

Get ready to hear a lot of Code RED from @ridder_desmond9 and the @GoBearcatsFB offense this season. Relentless Explosive and Disciplined pic.twitter.com/6tk1AgoLGD

But what was most impressive and noticeable in and around the ancient home of the Bearcats was the atmosphere. This felt like a program and a fan base that was ready to announce itself as a legitimate challenger to the national championship with a quarterback that is likely to go in the first round of the 2022 NFL Draft.

To head coach Luke Fickell, he could tell early that his team was ready for this rivalry game and wasn’t taking the RedHawks lightly. This, he said, was a very good potential sign of things to come in 2021.

“I think the first thing we can judge is what our leadership looks like,” Fickell said. “How you come out, how you respect a rivalry has a lot to do with the leadership, and whether we’ll become a better football team than last year or even the year before is still to be seen. Do I believe we can be? Do we have the pieces to be? There’s no doubt in my mind. But I think what Game 1 shows more than anything is the different leadership we’ve got on this team.”

Luke Fickell says there's great potential in the leadership and poise of his Bearcats pic.twitter.com/jpRFboYVeM

On the game’s second play, Ridder drew in the Miami linebackers just far enough and froze the RedHawks secondary just long enough to allow Tyler Scott to run past safety Mike Brown and run under Ridder’s 50-yard rainbow. Scott took it the final 30 yards to complete the 81-yard TD connection.

Ridder said afterward that the game is slowing down more and more in his head and it’s starting to pay off.

“Yeah, it slowed down for me, and that just comes from a lot of preparation this week. It came a lot slower and I’m seeing things a lot better. We’re having a lot of player meetings where it’s starting to slow down for them, too. They’re starting to see it and it makes it a lot easier.”

On his very first throw of the season, Desmond Ridder found Tyler Scott with the home run ball for an 81-yard touchdown and an earth-shaking Nippert Stadium moment.

Ridder was a one-man wrecking crew in the first half as UC ran out to a 35-0 halftime lead. Following an illegal formation that pushed the ball pack to the Miami 8, he called for halfback Ryan Montgomery to cross into the left flat all alone. Ridder simply had to complete the toss, which he did for the touchdown.

Ridder hit his open tight end Josh Whyle on the left sideline and Whyle did the rest, beating two would-be tacklers and skipping into the end zone. Even when he wasn’t throwing touchdowns, his big arm was setting them up, like when he found Jadon Thompson for 47 yards to set up Jerome Ford’s 21-yard up the middle for a touchdown.

The defense, led by cornerback Ahmad “Sauce” Gardner, was arguably just as impressive. After giving up a 40-yard AJ Mayer to Mac Hippenhammer pass completion on Miami’s second play from scrimmage, the shut the door the rest of the first half, holding Miami to 1-of-8 on third down.

We’re going to learn a heck of a lot more about just how realistic UC’s title aspirations are in two weeks when they play at Indiana and four weeks when they play the Irish at Notre Dame. But the Bearcats did precisely what they needed to do Saturday in their opener. They manhandled a lesser opponent on their home turf.

They made the statement that No. 2 Oklahoma didn’t against Tulane, with the Sooners eeking out a 40-35 win.

For one afternoon, the Bearcats, their Heisman hopeful QB, their athletic and fast defense and they’re super-charged fan base got what they were looking for in a blowout win over a lesser opponent. They have one more tune-up next week against Murray State before the games get a whole lot more serious against Indiana and Notre Dame.