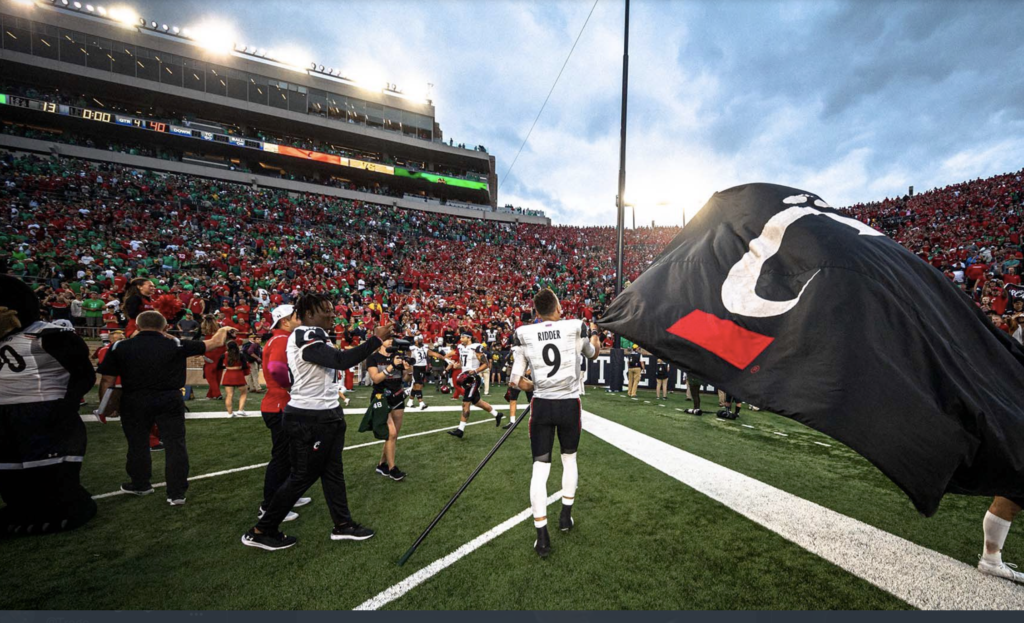 If the Bearcats were to close out the biggest win in the 137-year history of the football program, they were going to have to silence a sold-out crowd rising in one of the most historic venues in the sport.

The perfect spot for Desmond Ridder to define his legacy at the University of Cincinnati.

The Fighting Irish had just closed to within 17-13 on a Drew Pyne to Braden Lenzy connection of 32 yards over Coby Bryant in the right corner of the end zone. Notre Dame had just scored the last 13 points and there was 8:20 remaining in the game.

Ridder and head coach Luke Fickell were on the field in January when the Bearcats couldn’t hold onto a 21-10 fourth-quarter lead against Georgia and complete a perfect 10-0 season.

The lesson from that game was to finish. Boy, did they ever finish Saturday in South Bend.

Ridder led the Bearcats on a drive that has the potential to be the biggest of launching pads into the national championship playoff picture.

Ridder drove his team 75 yards in six plays and three minutes, 12 seconds. Needing a big play on second-and-9, Ridder threw an absolute dart to Leonard Taylor of 34 yards to the Irish 17. It was the kind of play that NFL first-round quarterback prospects make, a laser throw under fourth-quarter pressure with his team sliding.

“I just noticed a double team on Alec (Pierce) and saw a linebacker over on LT and just made the throw. He made a great catch, a huge play,” Ridder said.

Jerome Ford ran for 11 yards to the Notre Dame 6. Then, appropriately Ridder finished it off, this time with his legs as he ran to daylight off the left side for the game-sealing touchdown. Bearcats 24, Irish 13.

“Coach Kelly set the standard (at UC),” a gracious Fickell said of his counterpart on the other sideline, a counterpart who was celebrated earlier in the game for passing Knute Rockne as the all-time winningest coach in Irish history last week in Chicago against Wisconsin.

Fickell then praised his quarterback, “You always have a chance when you have a kid like Desmond Ridder.”

Think about what UC was up against in that fourth quarter. A 17-0 halftime lead had dwindled to four points. You had a coach who just passed Knute Rockne in South Bend. You had a third-string freshman quarterback in Drew Pyne come off the bench and light a fire under a struggling Notre Dame offense.

Countless times over the last hundred years, opponents both great and mediocre, had wilted under such karma. Not the Bearcats. Not on this day. That, maybe more than anything else is why Saturday is unquestionably the greatest moment in the history of Bearcats football, dating to its inception in 1885.

“Huge, not just for me, the team, the community, the whole city.” a breathless Ridder managed to speak to NBC’s Kathryn Tappen in the ecstatic moments of glory on the field.

Ridder, who finished 19-of-32 for 297 yards and two touchdowns, could not have been more right.

The Bearcats turned two first half turnovers into 10 points and then put together their best drive of the game right before halftime to go ahead 17-0.

The Bearcats defense created a pair of crucial turnovers while putting the Irish in their biggest home halftime hole since USC in 2007.

Jack Coan moved the Irish down the field on the opening drive of the game. But facing pressure from the Bearcats front, Coan was hit as he threw and Ahmad “Sauce” Gardner picked off the floating pass at the Bearcats 6.

The first big bullet of the day had been dodged. But the offense couldn’t get going. Ridder and company had to be patient and take their shots when they arose.

The defense was the story of the first half, setting up the first score of the day when Myjai Sanders got in the face of Tyler Buchner, allowing Deshawn Pace to pick off the pass and return it to the ND 8. Facing third-and-goal, Ridder found a wide open Leonard Taylor from one yard out on a perfectly-executed play action. Bearcats had the all-important first score.

The Bearcats got another big break when the Irish’s Chris Tyree fumbled the ensuing kickoff and Wilson Huber recovered at the Notre Dame 17. The Bearcats were only able to convert a 23-yard field goal from Cole Smith for a 10-0 lead.

Ridder’s other defining drive of the game came to close out the first half. With 1:48 left in the half, Ridder engineered a five-play, 80-yard drive that took only 68 seconds. Ridder hit Tre Tucker on a 27-yard pass that required Tucker making an athletic move to come back and finish the play with the defender spinning around.

The Bearcats were up 17-0 before a stunning Notre Dame crowd, with a healthy number (thousands) of Bearcats fans hootin and hollering so loud that they were the only noice heard throughout.

The Bearcats faced their own adversity, when they came out in the second half with possession and marched right down the field, only to have Smith pull a 30-yard field goal wide left.

Ridder’s only mistake was fumbling the ball as the Bearcats were poised to make it 24-0 late in the third quarter. The Bearcats were at Notre Dame’s 24 when Isaiah Foskey strip sacked him. Drew White returned it 28 yards to the Bearcats 38.

With just over 14 minutes left and the Bearcats facing 1st-and-15 following a false start, Ridder connected with Alec Pierce for 44 yards down the left sideline. But again it was Smith missing wide left, from 37 yards with 11:28 left.

Notre Dame had everything going their way. UC fans were having bad flashbacks to Jan. 1. But not on this day in South Bend. Desmond Ridder made sure of that.

The rest of the season awaits, along with the hopes of becoming the first-ever “Group of Five” team to join the national playoff picture. The Bearcats now need to avoid what happened to No. 3 Oregon at Stanford, losing in overtime as Stanford tied the game with no time left in regulation.

“If we win (12) games and we’re unbeaten and we don’t (get in playoff), that’s out of our control. We can only control what we can control,” Ridder said.

That job continues Friday night at Nippert against Temple.