Did Marcus Smart Have his Best Game Ever in Celtics vs. Lakers?

Marcus Smart shot 9-for-13 in the Celtics' win over the Lakers Friday, his best efficiency ever on that volume of shots. 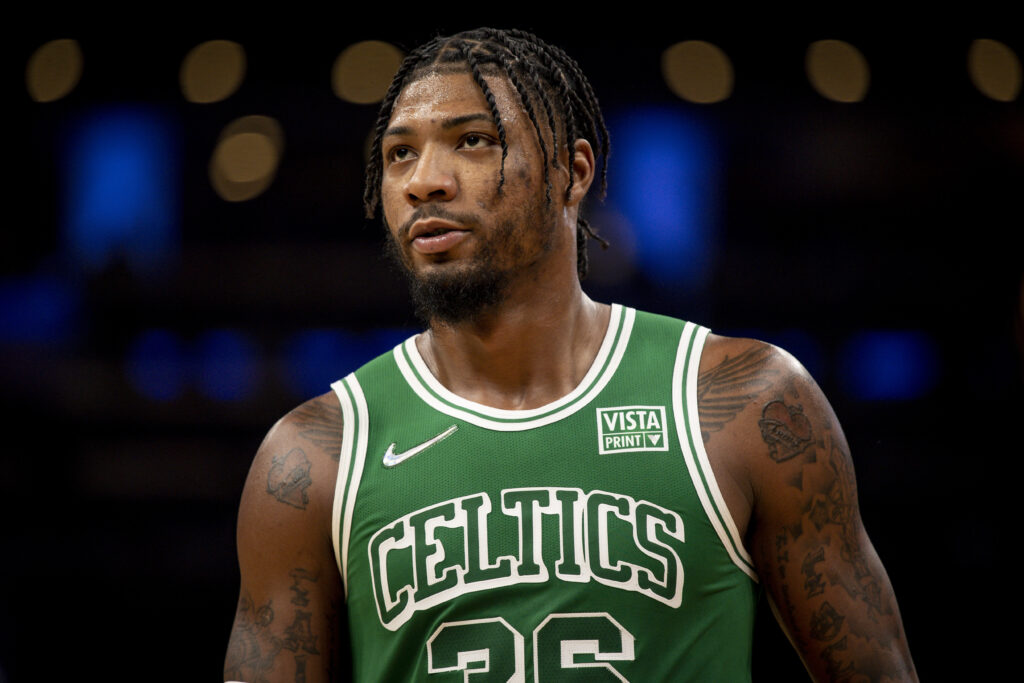 BOSTON, MASSACHUSETTS - NOVEMBER 19: Marcus Smart #36 of the Boston Celtics looks on during a game against the Los Angeles Lakers at TD Garden on November 19, 2021 in Boston, Massachusetts. NOTE TO USER: User expressly acknowledges and agrees that, by downloading and or using this photograph, User is consenting to the terms and conditions of the Getty Images License Agreement. (Photo by Maddie Malhotra/Getty Images)
Share
Facebook Twitter Email

BOSTON — Marcus Smart told the Celtics not to settle, as Ime Udoka and the players saw the Lakers bringing up their bigs and forwards to attack Jayson Tatum. They knew they’d find advantageous matchups and driving lanes, but found themselves trailing by 12 points against a LeBron-led, prolific Lakers fast break attack they expected yet couldn’t stop in the first quarter.

Then Smart went downhill. He drove repeatedly to lead the Celtics with 11 first-quarter points, while Tatum began 1-for-5 from the field. The Celtics scored almost exclusively at the rim and on free throws in the fourth quarter, while Smart finished 9-for-13, his best field goal percentage ever on that volume in his career. It culminated in a 130-108 victory where Boston generated 56 points in the paint.

A glance at the list of Celtics to shoot 69% on at least 13 attempts includes Jaylen Brown, Gordon Hayward, Kyrie Irving, Terry Rozier, Paul Pierce, Ray Allen, Antoine Walker and Tatum. Not even Kemba Walker had as efficient of a night as Smart did in green.

“(Smart) put his head down, especially when Davis and some of those guys went out and he really attacked their bigs when they went back a little further,” Udoka said. “And they got some of the guards on his hip, so he was extra aggressive, we needed it at the time and you look at what he did with our bench production. I mean we had guys at +27, +19 and +21, they really came in and shaved some points off that lead, got us back in the game.”

Smart lit up seeing Malik Monk and Rajon Rondo covering him into the Lakers’ second unit. Udoka subbed him in for Grant Williams to play alongside Romeo Langford, Payton Pritchard, Enes Kanter and Josh Richardson, and Smart ventured inside the arc on 5-of-6 possessions near the end of the first.

Smart scored on four of those plays, flashing a softer touch from mid-range than on his struggling three-point shot. On a fifth scoring play, he caught a pass in the corner and drove to create a second-level look for Richardson. The bench unit cut the Lakers’ lead from 12 to eight in four minutes before the second quarter.

More than he has all year, Smart showed great awareness regarding the defense’s positioning and his own ability to exploit mismatches — a true point guard. He knew Anthony Davis reentered this play late defensively, that Carmelo Anthony posed no real threat in help defense and rode his instincts all the way downhill around Kanter’s screen.

“We can get those shots at any time,” Smart said of Boston’s tendency to settle. “Just continue to drive. There’s a lot of matchups out there that we can exploit, just try to go out there and do it.”

The Celtics’ players made it sound easier than it’s been to reach the basket through 15 games, during which they averaged 26.5 shot attempts inside (24th). Friday’s win alone boosted them to 22nd, with 33 tries from within five feet.

Boston converted 65% of their looks when they did get there, tied for 4th in the NBA. That puts them in the same class as the Warriors, Jazz, Nuggets and Wizards, arguably the four best teams in the NBA right now.

Still, getting inside regularly remains a challenge for Smart and others. Smart shoots 23% of his shots at the rim, compared to 52.6% from three. Tatum displays a similar chart, with a 28% shot frequency inside compared to 37.5% of his shots coming from deep, with ample usage in-between. As noted on Thursday, Tatum’s average distance from the rim on shots has increased steadily since 2018.

While Tatum struggled to finish around the rim (51.5%) to start the year, Smart posted career-high efficiency (63.6%) within five feet, in the same class as Darius Garland, Lu Dort and LeBron (62-63%), albeit while attempting far fewer shots per game (2.2). Smart took seven layups or close shots on Friday, with Schröder and Tatum following his lead into the second quarter, riding a downhill attack to run over LA the rest of the way.

“I’ve been doing that my whole career,” Schröder said. “I think our group, we can’t let people off the hook. You just got to be aggressive, put pressure on the rim and that’s when we’re at our best.”

Perhaps Schröder’s urgency attacking played some role in inspiring Smart, as the pair formed a successful back court duo in Brown’s absence, Smart returning to his secondary playmaking role while Schröder opens the lanes to the rim on initial drives. At times, the former Laker blew by Carmelo Anthony and others like a blur. The Celtics will move Schröder back to the bench when Brown returns, but expect Udoka to still find significant minutes to pair him with Smart.

Smart capped his career night in the fourth how only he could, with a chaotic pass tipped back to him in the lane from Horford leading right to an and-one. He breezed to the rim for one layup, spinning the ball reverse off the backboard going baseline, and when Smart found Tatum for the three-point game-icer, it marked Boston’s first triple of the fourth seven minutes in — a quarter they won 37-26.

“When (Schröder and I) are rolling like that, it gives that extra energy for everybody else to kind of get into their own game and get into a rhythm,” Smart said. “I think we saw that tonight, especially with Jayson. Very proud of that … it might not look like it right now, but we’re going to turn things around.”