Even in loss, Musketeer fans have lots to look forward to with this bunch. 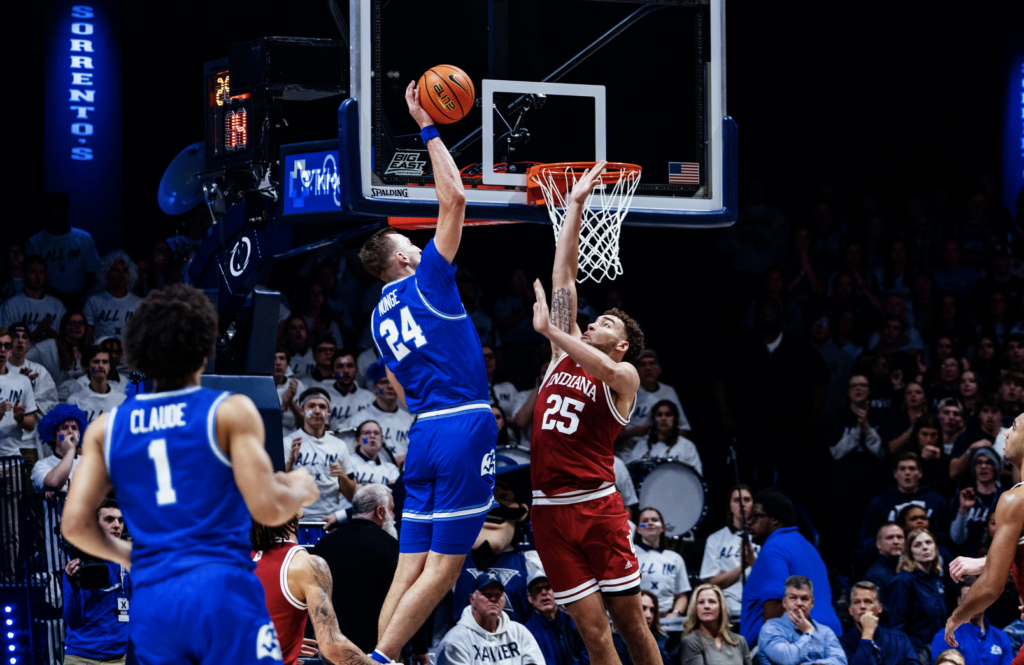 CINCINNATI – Miller Time is back.

Sure, Sean Miller was rehired on March 19 to return the Xavier men’s basketball program back to the heights it enjoyed in his first run on Victory Parkway in the late 2000s.

But the first three games of the season were a mere warmup to what energized fans enjoyed Friday night at Cintas Center.

Yes, Xavier lost 81-79 to No. 12 Indiana when Adam Kunkel’s left-handed layup danced around the rim but fell off with four seconds left. That layup would’ve given the Muskies (3-1) an improbable and electrifying win. Still, it was a game that offered a glimpse of what is to come with this bunch.

“We have to keep our eyes on what’s most important, which is getting better and improving. If Adam Kunkel went down the left (side) of the lane and made the shot, it would’ve felt like a parade here tonight,” Miller told me. “But we still have the same issues.”

“There aren’t too many college basketball games before Thanksgiving that are going to have what we had here tonight. I thought it was a heckuva game. We had a tremendous crowd as always. I’m disappointed we weren’t able to take advantage of it with a win.”

Close but no cigar for Sean Miller and @XavierMBB Friday vs. Indiana pic.twitter.com/k4KzmBA5zz

From the moment Colby Jones returned from his ankle injury and led the Muskies onto the court for warmups to the standing ovation the head coach received parting the student section and onto the court, the building was buzzing.

“There are a lot of kids who would not have played tonight,” Miller said of Jones. “We didn’t put him at risk. But a great player, a great kid.”

It was the kind of atmosphere and environment Miller was brought back to foster on a regular basis.

“It feels amazing,” Miller said. “Right now, I feel guilty because we lost. This is one of the great places to be at. I know that. We have a good basketball team. I know that.”

The Muskies played to the crowd perfectly in the opening minutes, knocking down open threes while – more importantly – showing no hesitation in taking it to the Big 10 visitors in the paint early and often.

Xavier built a lead of nine points in the opening 20 minutes, 28-19, and Jones was flying all over the court, playing very much the part of his status as a preseason All-Big East selection. Xavier led 40-38 at the half.

But then Indiana, behind star Trayce Jackson-Davis, made a predictable run for a team that has its sights set on the Top 10 all season. They led 54-46 and looked like they were about to pull away.

And that lack of preparedness resulted in five fouls in three-and-a-half minutes.

Adam Kunkel took over. The guy who kept Xavier in the game in the first half on Tuesday against Fairfield, hit from 30 feet out on the left wing with 13:49 left to make it a three-point game.

Then Kunkel hoisted a shot from the right baseline in front of the Xavier bench with 9:49 left. The shot hit off the front iron, bounced in the air and back down through the basket to tie the game, 60-60.

From there, it might as well have been March Madness in November.

“Let’s go X!” chants filled Cintas. Even the rally against Villanova that fell just short last February didn’t feel like this. Maybe because the fan base just didn’t believe.

Miller slammed the scorer’s table after Jackson-Davis grabbed an offensive rebound hit a reverse layup to tie the game, 62-62, with seven minutes left. Defense and rebounding.

An Indiana three for the lead. A Zach Freemantle drive and dunk with 6:30 left for the lead back.

“Let’s go Hoosiers!” chants from the hundreds of Cream and Crimson fans was met with boos quickly as two Jack Nunge free throws brought Xavier within six, 78-72, with 2:10 left.

Colby Jones was fouled on a made runner with 1:51 left that made it 78-75. The sellout crowd didn’t sit the rest of the way. Souley Boum’s three with 56.5 left drew Xavier within one, 80-79, and sent Cintas into pandemonium.

There was almost an inevitability to it. And that sense only grew when Indiana’s Malik Peneau missed two free throws with 12 seconds left. No timeouts and Xavier with the ball and a chance at a stunning win.

“I feel like we got a good look,” a dejected Kunkel told me after. “It just didn’t go in this time.”

“Every game is a learning experience, especially when it’s coming down the stretch,” added Xavier forward Jack Nunge.

When Miller left, Xavier was still in the Atlantic-10. Now, the Musketeers have a chance to ride a wave to the top of the Big East, a conference that is as competitive and intense top-to-bottom as any in the country.

To survive on the big stage, you have to have perform in big stage games. Friday was just that as Xavier had the opportunity to host Indiana in the Dave Gavitt Big East-Big Ten Challenge.

Indiana, with head coach Mike Woodson, came in ranked No. 12 in the country, with designs on awakening their dormant dynasty of decades past. Friday was an early exam for this Muskies team.

Xavier, the defending NIT champs, didn’t win, but if it improves defensively then games like Friday night will turn into wins and those shots will start to fall at the buzzer. And Sean Miller and Xavier fans might have realistic dreams of a thrilling run in that other March tournament.