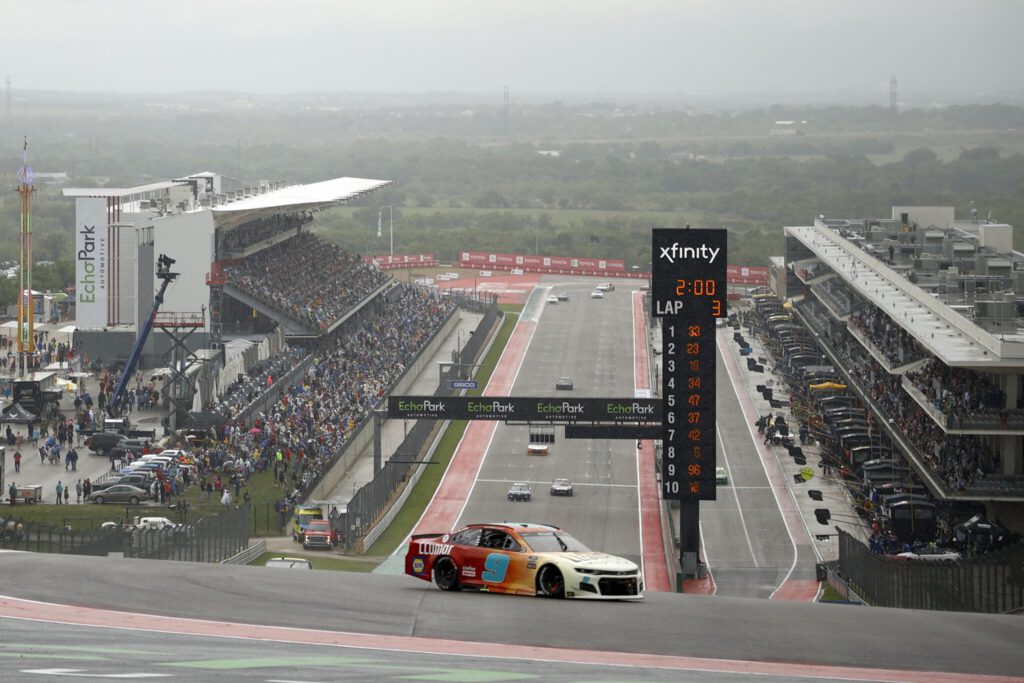 Chase Elliott won the Inaugural EchoPark Automotive Texas Grand Prix from the Circuit of the Americas on Sunday afternoon after weather ended the race with 14 laps remaining.

Elliott, winningest active driver on road courses, ran up front for most of the race before he took the lead under the final pit cycle.

Elliott won on the first new track added to the schedule since 2011, with the world-class facility of Circuit of the Americas normally hosting Lewis Hamilton and the rest of the drivers in Formula 1.

The weather was the story of the day, as the Cup Series ran under rainfall for the very first time.  Rain tires allowed drivers to run on the wet racetrack, but standing water created visibility issues in the second stage.

Martin Truex Jr., Kevin Harvick, Bubba Wallace and Cole Custer were among those involved in two scary accidents in the second stage, which caused NASCAR to throw the red flag to help push water off the track.

The race was able to continue as the rainfall slowed, but with the laps winding down the heavy rain returned.

Elliott said standing water on the backstretch was causing problems over the final laps.

“There were some areas on track that were getting treacherous,” Elliott said.  “The back straightaway was puddling up and you started to hydroplane and do some weird stuff.  My only option was to…just send it through those spots and hope for the best.”

Elliott’s victory was also historic.  The win was the 800th for Chevrolet in the Cup Series, and it was also the 268th victory for Hendrick Motorsports, tying them with Petty Enterprises for the most in Cup Series history.

Elliott said his crew chief made the right call with the team short on fuel.

“I just kept pushing myself harder and harder,” Elliott said.  “We’ve had kind of an up-and-down year.  Not the ideal win, but we’ll definitely take it and move on down the road.”

Elliott’s teammate Kyle Larson finished second for the second week in a row.

Larson said he was hoping the race would resume with his teammate short on fuel.

“I wanted to go green the whole way,” Larson said.  “I think Chase was short on fuel; we wanted to keep going so he’d have to pit.”

“Really cool to run up front on a road course and…get my first rain race in.”