Danilo Gallinari told CLNS Media's A-List Podcast he had been in past discussions with Brad Stevens and the Celtics about opportunities to join the team. 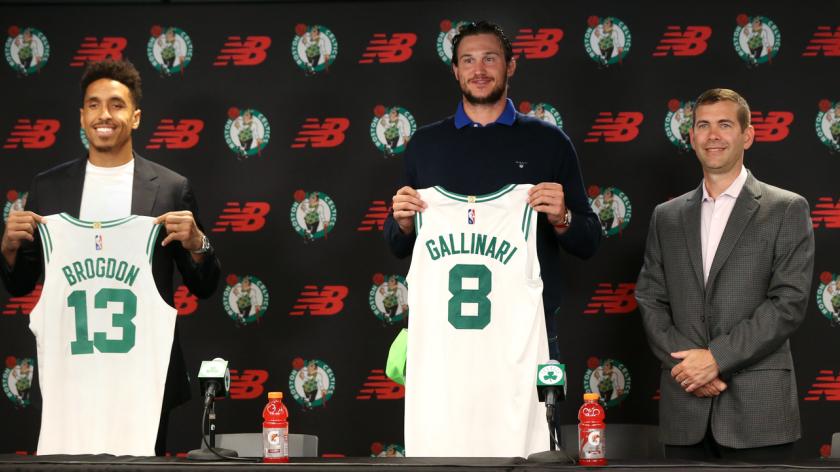 Danilo Gallinari had opportunities to join the Boston Celtics in the past. Like Malcolm Brogdon, he sat alongside Brad Stevens as a player the former head coach coveted, and now had the chance to acquire entering year two of his executive role with the team.

Gallinari revealed he had talks with the Celtics during his two previous free agencies, appearing for an exclusive interview with A. Sherrod Blakely, Kwani Lunis and Gary Washburn on CLNS Media’s A-List Podcast. After starting his career moving from the Knicks to the Nuggets in the Carmelo Anthony trade, Gallinari ended up with the Clippers in 2017 and Hawks in 2020 as part of sign-and-trade deals. Boston proved to be his first outright contract with a new team, one that’s fully intact from its NBA Finals run a year ago, with Brogdon and Gallinari joining to solidify what’s already in place — focused on winning.

He now joins the Celtics for his 34-year-old season, averaging 11.7 points per game last season, his low since his rookie year in 2009. Gallinari remains a reliable shooter, finishing 38.1% from deep and can create his own shot when needed. He’ll add to a Boston team that occasionally struggled to space the floor for Jaylen Brown and Jayson Tatum.

“I think I can help a lot just by doing what I’ve been doing for all these years,” Gallinari said. “They did a great job last year, but I think that I can help.”

Gallinari’s connection to the Celtics goes back to his days growing up in Italy, where his father Vittorio, also a basketball player, became a Larry Bird fan. He showed Danilo clips of the Boston legend, who Gallinari borrowed from as he started to form his own professional career in Italy from 2004-2008.

“He was a better trash talker than me,” Gallinari quipped.

The Celtics introduced Gallinari alongside Malcolm Brogdon earlier this month with his father in attendance, before he returned to Italy to get married in the coming days. Gallinari spent the press conference saying he intends to do whatever it takes to win with Boston, coming to the team over other competitive offers after the Celtics fell just two wins short of a championship. Like all of his teammates, he’s never won one and felt it’s time to make that a top priority. He already transitioned to the bench in Atlanta these past two seasons.

Atlanta sent Gallinari to San Antonio in the Dejounte Murray trade, guaranteeing $13-million to match contracts in the deal before the Spurs released him. The Celtics then signed him to a two-year, $13.3-million deal with a player option for 2023-24. Defense, rebounding and passing aren’t his strong suits, so he’ll fill a narrow role, but both Ime Udoka and Stevens teased Gallinari moving toward a more interior role, helping the Celtics spell Al Horford and Robert Williams III at the center position. Luke Kornet is the team’s lone depth big on the roster after Daniel Theis got traded. Boston also added Mfiondu Kabengele on a two-way contract.

Gallinari believes he brings a mental toughness and experience to a younger team that he’ll get to know for the first time. He only spent past summers with Horford on NBA offseason initiatives, before competing in his first Olympic Games in 2021 with Italy. He’ll wear No. 8 for the Celtics and has already made numerous trips to the North End, which serves Italian food that gained Gallinari’s approval.

“I think they have a tight young group with a lot of experience already,” he said of the Celtics. “They’ve been to the playoffs almost every year for the past few years, and especially what they did last year. I think that’s a group that can do some damage in the future and so that was the main goal for me. Being part of this, especially the city, the franchise, the history, a lot of reasons.”