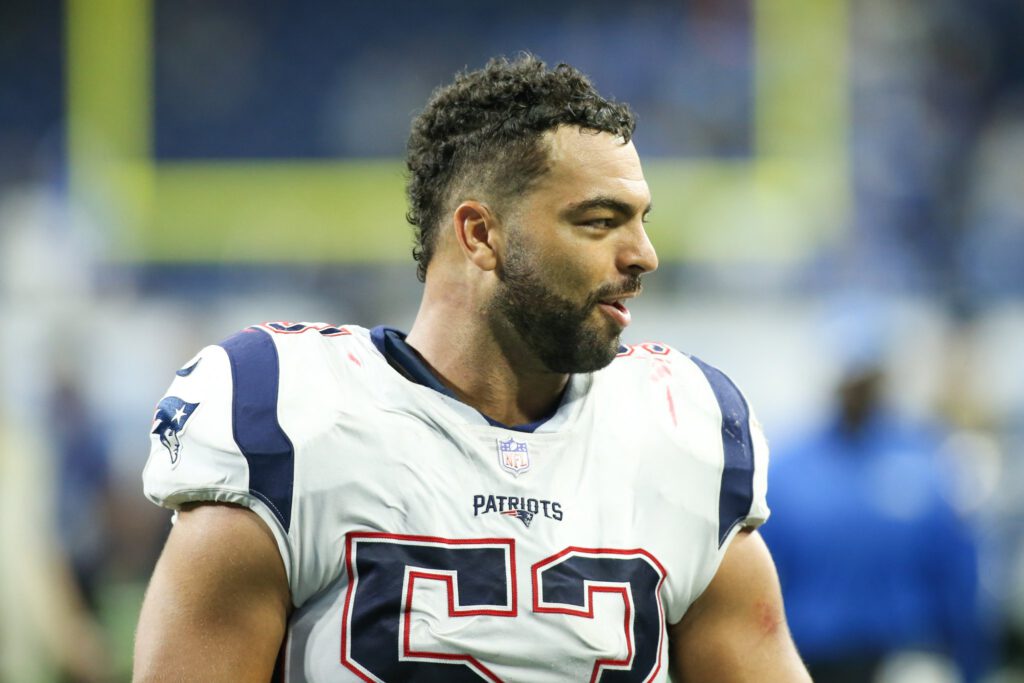 The Patriots defense, like most of the team through three games, isn’t off to the start anyone was hoping for in New England.

The Pats defense, a unit that allowed 18.5 points per game last season, is allowing an average of 25.7 points through three games this season.

However, although many on the outside won’t agree, Patriots linebacker Kyle Van Noy is confident in the team’s talent on the defensive side of the ball.

“We have speed and talent too. I know everyone thinks we don’t, but we do,” Van Noy said in the Patriots locker room on Wednesday.

“We just haven’t put it together…We just gotta fix the things we need to fix, and I think we’ll be alright.”

The entire Patriots defense needs to play better at all three levels, and they know it, but Van Noy and the linebackers have taken the brunt of the blame for the struggles on that side of the ball dating back to the start of the 2017 season.

Van Noy understands that he can’t change peoples minds about him or the Patriots defense, but wants people on the outside to understand his perspective.

“I’m comfortable where I’m at. I wish people just understood the whole dynamics of the game vs. seeing something that happens [like a missed tackle]. Nobody plays a perfect game.”

Many have labeled the Pats linebackers as slow and a liability in coverage, but they’ve actually held up well through three games this season.

The Patriots’ linebacker group has allowed a stingy 59.7 passer rating in coverage, are responsible for two of the team’s three interceptions this season, and the Pats have allowed only 149 receiving yards to running backs through three games despite matchups with pass-catching backs Lamar Miller, Corey Grant, and Theo Riddick (league average – 137 total yards).

Now Van Noy and the linebackers know they need to shoulder some of the blame for the Patriots’ inability to stop the run, but they’ve done a solid job holding things together in the passing game thus far.

If talent isn’t the issue, the question then is how do the Patriots recover from a 1-2 start, and get back to winning football games?

And before you make this into one of those things about head coach Bill Belichick’s coaching style a la Eagles offensive lineman Lane Johnson, Van Noy added, “that’s the thing, I think Bill has more fun than people think.”

During Monday’s conference call, Belichick acknowledged that his defense lacked energy the last two weeks, but said it wasn’t a matter of effort but instead has to do with the lack of success they’re having on that side of the ball.

“I think the effort and the energy are good,” Belichick said.

“We’re just not having a lot of success in any area, and I think as soon as we start having some you’ll see a difference, but it’s hard to have it when you’re not making enough plays.”

The former second-round pick agreed with his head coach about the energy level on defense saying, “I mean it’s not fun when you aren’t playing well.”

“We just want to put on a good display for the work we’ve put in because as you’ve been around the last couple months you’ve seen all the work being done, and I guarantee not all the teams are putting in this much work.”

Van Noy and many of his teammates echoed this same sentiment all week when asked what the keys are to stopping a two-game skid.

“We just need to have it [energy]. Every chance we get. It’s a privilege to play the game. We need to be excited to have the opportunity.”

The linebacker also stressed the necessity for the Patriots to play with confidence, as some have pointed out that their confidence level appeared to drop on Sunday due to their poor play.

“See you can’t think like that [focusing on mistakes]. You always have to have confidence.”

Of course, the Patriots aren’t in uncharted territory when it comes to slow starts, and Van Noy is preaching patience, “it’s still early. We’re still working at it. We just got to get better,” he said.

Ultimately, Van Noy is just appreciative of the opportunity that the Patriots have given him since they acquired the linebacker and a seventh-round pick for a sixth-round pick in October of 2016.

The five-year veteran has been a versatile member of the Patriots defense over the last two-plus seasons and brought stability to a shaky position after the team shipped former Pro Bowler Jamie Collins to the Browns in 2016.

This season, Van Noy has taken on a role on the line of scrimmage as an outside linebacker for New England after playing off the ball at times in the past.

But Van Noy doesn’t care if he’s playing off-the-ball linebacker or on-the-ball, he’s just thankful for a chance to play for the New England Patriots.

“Honestly, at the end of the day, I just appreciate the opportunity to play and start. I’ve been at a place where I wasn’t used at all… I don’t want to go back to that,” the Pats linebacker told me.

“I’m happy with whatever I’m asked to do, and I’m going to do it with a smile because I remember what it was like without it. I’m happy to be able to play football.”

On Sunday, the Patriots will welcome the undefeated Miami Dolphins to Gillette Stadium in the teams first divisional game of the season.

With the Dolphins at 3-0 this season, the 1-2 Patriots cannot afford to drop a head-to-head matchup against an AFC East opponent already two games ahead of them in the standings.

The task for the Patriots linebackers on Sunday will be containing a speedy group of Dolphins skill players in the backfield, and their receivers that head coach Adam Gase often implements in the running game.

Last week against the Raiders, the Dolphins receivers scored two touchdowns on plays that are officially considered passing plays but were essentially runs on what is called a “tap” pass on jet sweep actions.

One of those tap passes was a back-breaking 74-yard touchdown “run” by wide receiver Albert Wilson, which put the Dolphins up 28-17 late in the fourth quarter.

Van Noy knows the Patriots need to be ready for a unique Dolphins rushing attack but kept it simple when asked how they’ll slow it down on Sunday, “I think it’s that [awareness] and just reading your keys, playing your assignment.”

There’s also the possibility that Van Noy will be asked to wear the green dot against Miami, which signifies the player on the defense that has a headset in his helmet to relay defensive play calls from the sideline.

Patriots rookie linebacker Ja’Whaun Bentley wore the green dot for most of the game against Detroit, but he is now on injured reserve, and although that wasn’t Van Noy’s role last week, it’s nothing new to the veteran.

“I’ve done it here. So I feel comfortable with whatever,” Van Noy said.

Wearing the green dot is sometimes an overrated phenomenon by many, and Van Noy agrees saying, “I think it’s important, but at the same time, I feel like anybody here could do it. I think [Patriots defensive tackle] Malcom Brown could do it because he knows everything.”

The Patriots know they’re up against it after digging themselves into a hole with two consecutive losses, but they also know they’re better than the team that took the field on the road in Jacksonville and Detroit over the last two weeks.

The feeling in the locker room is that they have the necessary talent to win, and will get back to playing the way we are used to seeing from Bill Belichick’s team soon.

Although the last two weeks haven’t been pretty, the Patriots players and coaches are confident they’ll turn things around.