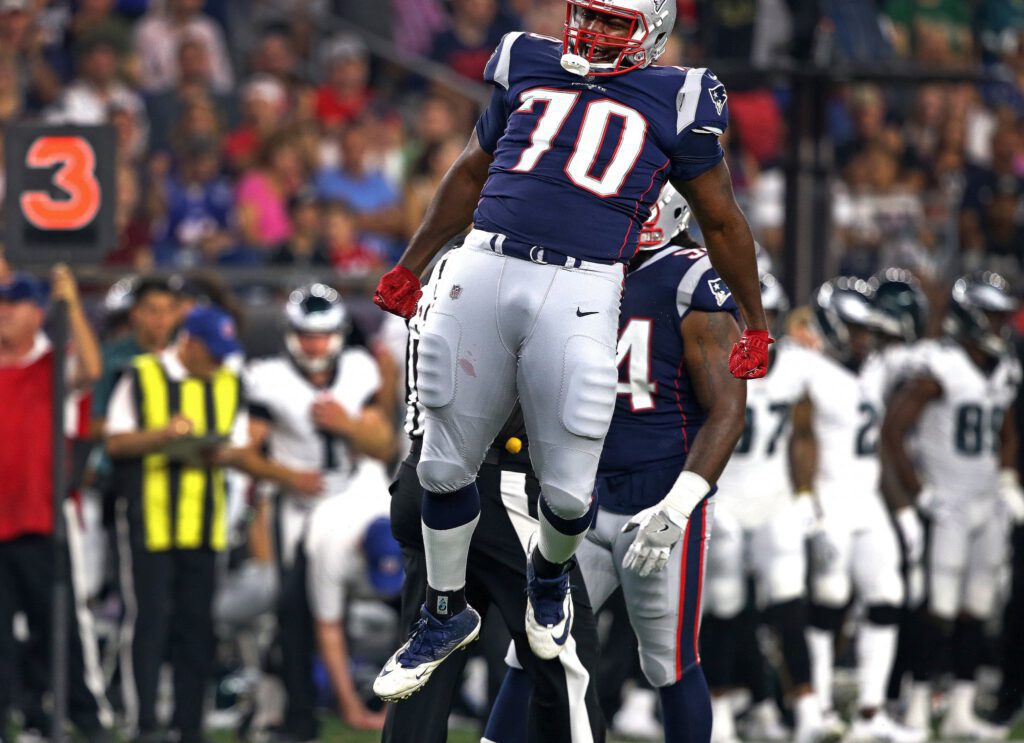 Now in his second NFL season, Butler has continued to build on his strong rookie campaign, tallying six quarterback pressures in the 2018 preseason, doubling up the rest of the Pats’ defensive lineman.

Here’s the transcript of a Q&A I had with Butler in the Patriots’ locker room on Monday:

EL: Walk us through your pressure on quarterback Cam Newton in the first quarter of last Friday’s third preseason game?

AB: “Most of my moves are up the field, and if the offensive lineman takes the cheese I counter back underneath. They were kicking out of their really fast. So I really just threatened them up the field as fast as I could and he just over-set me one step too far, and just instinctively came back inside.”

EL: You went right by him on that one. How does it feel when you go right by a lineman like that, it must feel great.

AB: “Ya, it feels great but at the same time when you go against a quarterback like Cam Newton (EL: he escaped on you). Well, it’s like going from one battle to another. You know that’s what makes mobile quarterbacks so much more difficult than pocket quarterbacks. Because you go from one battle and now you have to face a whole other battle.”

AB: “I think it’s coordination. Rush coordination. With guys like Cam Newton, with guys like Deshaun Watson, it’s never going to be just one person. When somebody comes free, you have to be ready for them to miss. You try to be positive, but you got to respect them. They’re known for shaking and juking people, and it wouldn’t surprise me if someone got shook on the first free run.”

EL: On that first pressure (play above), was your assignment on that play to go full bore at the quarterback or were you guys trying to contain rush to keep Cam in the pocket?

AB: “The goal was to contain and get pressure at the same time. Whatever move that you make you just have to make sure that’s a move within the coordination (of the rush) if that makes sense. Obviously, everyone wants to keep the quarterback inside, so the edge force is very important. But the pressure up the middle is very important as well. I was hoping that the edge force would be there a little more, but at the same time, Cam Newton loses depth when he scrambles out of the pocket. He doesn’t just go right or go left. He loses a lot of depth to get around the edge.”

EL: I wasn’t going to bring it up!

EL: How does that learning experience help you, playing Deshaun and other mobile quarterbacks in the past, for the Week 1 matchup?

EL: It kind of like basketball. You have to break down and keep the guy in front of you. Would you agree?

AB: “Ya, that’s kind of what I would say. But then you have to be careful about that because then they can out-run you. So if you slow down too much and you stop (whistle noise), then he’s gone.”

EL: You don’t have a favorite?

EL: I won’t tell anybody.

AB: “Ya you will, you’re a reporter! You’re going to tell everybody. I don’t want to reveal it. You’ll just have to watch the film.”

EL: Okay, I’m going to come back to you next week and tell you what I think it is, okay?

EL: You do a lot of stunts inside here, you do pretty well with those. You obviously had a nice pressure against Carolina with one. What are you looking for on those?

AB: “I’m trying to remember the play you’re talking about…”

EL: I’ll give you a hint, you were flagged for roughing the passer on the play. I didn’t want to bring that part up.

AB: “Ohhhhhh, that play, okay. I would say just selling the rush. Because it’s a two-way, it’s not like one guy free, none of the rushes are like one guy free, it’s either or depending on how the offensive line blocks it. With that one, I wanted to keep my feet, but I’m supposed to wrap tight to maximize the efficiency of the rush. If you wrap wide it takes more time. So on that play, I was just trying to wrap tight so I could get back there as fast as I could.”

EL: Coach Joe Kim (martial arts expert), how has he helped you with your pass rushing skills?

AB: “He’s very good. He has definitely helped me with the rush finishes, like the backend part of my rushes. I used to struggle a little bit with finishing some of them, you know, I’d have great first initial moves, and I wouldn’t bring the back leg through, and they’d recover and get me. But now, that play if you go back and watch it, I club/rip the center, and I brought my back leg through to finish the rush. You know, instead of widening out or taking too long.”

EL: You add some pass rush to the interior of the defensive line. You have these big guys next to you in Malcom (Brown) and Danny (Shelton) that are run stuffers. What does it mean to you to have that role as a guy that gets in there on passing downs and rushes the passer?

AB: “It means a lot, and I’m very appreciative of what they do on first and second down to give me a chance because if we never get to third down will I ever play? (laughs). I mostly go in on third down. But it means a lot to have that role, and I definitely don’t take it for granted.”

EL: What are you doing to get better at defending the run so that you can play more on early downs?

AB: “Just every day I’m working on the hand placement trying to take the coaching and everything, and I’m also working the weight room trying to get stronger.”

Huge thanks to Adam for his participation in this interview.