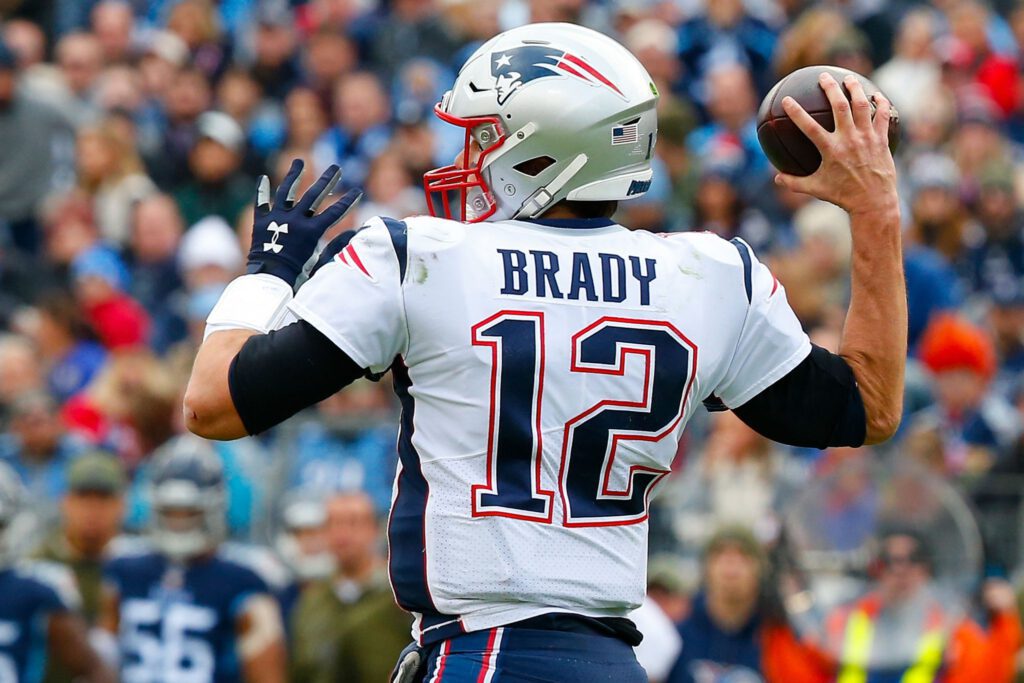 FOXBOROUGH — Are we finally seeing the inevitable decline of Tom Brady?

No, there will be no Rob Parker-esque hot takes here, and Brady isn’t falling off any cliffs; he’s just marginally worse in a few critical areas then he was a year ago.

Before we get into Brady’s play, it’s important to note that the things covered in this review will isolate him from the players around him.

There are multiple factors that have contributed to Brady’s shaky play of late that are outside of his control: the offensive line didn’t play well in Buffalo or Tennessee, Brady’s weapons are in and out of the lineup, and the offense as a whole lacks a go-to set of plays.

Although those variables have nothing to do with Brady, he’s not free of blame.

Over the last three weeks, and at other points this season, Brady’s footwork and lower body mechanics have been uncharacteristically subpar.

More so than his age, those miscues explain why Brady’s downfield accuracy and velocity seem to be slipping, at least by his standards.

Furthermore, any discussion about Brady’s “decline” in play also needs to mention how he has handled pressure this season.

Last season, Brady was the best quarterback in the NFL with a 95.8 passer rating and a 76.0 grade from Pro Football Focus under pressure (min. 50 attempts).

Through ten games this season, that rating has plummeted to 71.0 (15th in NFL), and his grade in those situations is now seventh (63.6).

As those numbers would suggest, individually, Brady is still one of the league’s premier quarterbacks, but why are we seeing a small decline in his play?

Below, we’ll go over some of the mechanical issues and one key difference in how Brady is coping with pressure to answer that very question:

As some in the media discuss Tom Brady’s “noodle” arm, they’re missing the real reason for Brady’s waning velocity and downfield accuracy.

Throwing mechanics are complicated, but the most important thing to remember is that a quarterback’s arm strength doesn’t only come from his arm; it also comes from his legs and core.

And for Brady, he’s not stepping into throws (flat-footed) or throwing from a wide base consistently, which means he’s not generating any velocity from his lower half.

Brady wouldn’t admit to his footwork issues at his Wednesday press conference during the Patriots’ bye week.

“I study my mechanics every day so I feel like I look like my normal self out there,” Brady told me.

But the five-time Super Bowl champion knows better than anyone that his footwork needs to improve.

As I mentioned above, Brady has developed a bad habit of throwing from a narrow base, which can affect both velocity and accuracy.

Here’s a fourth down play from last Sunday that everyone has probably seen by now, but the conversation has been about Brady missing an open Chris Hogan and James White.

Let’s put aside the decision for a second, and look at the throw itself. By NFL standards, Edelman is open. However, Brady is a tad late to throw and doesn’t get enough on it to fit the ball into Edelman before Logan Ryan knocks it away. Watch Brady’s feet at his release: close together, his front foot doesn’t step into the throw, and his back foot slips as he let’s go of the ball. As a result, Brady doesn’t have enough zip on the throw to complete the pass.

On the whole, these narrow base throws mostly come when Brady has to reset his feet after moving in the pocket.

On this pass against the Packers, Brady’s first read is to Edelman at the sticks to convert on third and three. The Green Bay defense takes away the quick throw so Brady is forced to go to his second read, a crosser to Chris Hogan. When Brady resets his feet, you can see them come together, and he throws flat-footed without stepping into it to Hogan. Due to his small base, Brady comes over the top with the throw and can’t get his upper body through on the release, and the ball sails well over Hogan’s head.

There are instances on tape of Brady stepping into his throws, as shown here, and when he does so, you can see he generates plenty of throw power.

Along with the issues with his base, Brady has also developed a tendency to prematurely open his hips and step toward the boundary on sideline throws rather than at his target.

On this play, Brady’s lower half is completely out of sync, but the key here is his step before his release. Instead of stepping downfield toward James White, his left hip flies open, and his feet are almost parallel to his shoulders as he throws. The result: an ugly throw that lands well short of his target.

For reference, here’s a side-by-side comparison of what Brady’s feet looked like at his release on a very similar throw from last season.

If Brady fixes his mechanical issues, then you’ll see his power and ball placement return to normal.

In the introduction, I noted that Brady is still sixth among quarterbacks in Pro Football Focus grade under pressure.

That’s certainly a step backward compared to where he was last year, but it’s not a catastrophic drop-off.

Against the Titans, Brady struggled with pressure immensely, and his internal clock was to blame.

In other words, Brady gave up on plays too early, and as a result, missed open receivers.

So far this season, Brady has 20 throwaways through ten games, the third-most in the NFL, and he had six against Tennessee.

During the 2017 regular season, Brady only threw the ball away 22 times.

Some of that is due to his receivers struggling to separate, but there are also instances where Brady bails on the play before he has to throw the ball away.

On this play, the Titans bring both linebackers on a blitz. Wesley Woodyard comes through the line unblocked, and Brady throws the ball into the Patriots’ bench. Although Woodyard has a free shot at Brady, if you look at the overhead view you’ll see Brady’s check-down, James White, is open in the flat. Brady has plenty of time to get to White and absorb the hit, but he decides to throw the ball away.

Even though you may agree with Brady’s decision to preserve his body, it put the Patriots in third and long, and they end up punting two plays later.

In years past, Brady would stand calmly in the pocket and dump the pass off to White to stay ahead of the chains.

Brady might be protecting against injury or a preexisting injury, but plays like those hurt his production under pressure.

Similarly to throwaways, Brady has also taken his fair share of sacks over the last few weeks where he gave himself up early once he starts to feel the pocket collapsing.

Here, Brady feels the pressure off the left side and up the middle from the safety blitz, so he pulls the ball down early, and when he moves to buy more time, he never gets his eyes back downfield. Brady also locked onto Josh Gordon, his first read, on the shallow crosser, and never gets to a wide-open Julian Edelman at the top of the screen. Typically, we see Brady keep his eyes downfield and find Edelman on his second read before the pressure arrives.

At times, Brady’s processing speed and internal clock under pressure seem off this season.

Every time Tom Brady’s play slips, even for a few games, we have to listen to the doomsday reports of the end of the dynasty, which comes with the territory when you’re a 41-year-old quarterback.

Although Brady has struggled over the Patriots’ last three games, he’s still playing at a high level this season.

The three-time MVP ranks sixth with an 89.2 overall grade from Pro Football Focus and is eighth in Football Outsiders’ DYAR metric (Defense-adjusted Yards Above Replacement).

Furthermore, talks of a rapid decline in arm strength miss the mark of what’s truly to blame for Brady’s diminishing velocity: his footwork and throwing mechanics.

If Brady can fix his footwork in the pocket, and there’s an excellent chance he will, then you’ll see his arm strength return to a reasonable level for Brady over the last few seasons.

As far as handling pressure goes, Brady’s sped up internal clock is a concern, but improved play from his offensive line and a healthy group of skill players should help mask any deficiencies in that area.

And before you start calling for the end of the dynasty, even with his recent slump, Brady is still playing well enough for the Patriots to compete for another Super Bowl.