Five Takeaways from the Patriots Thanksgiving Night Loss to Vikings

Breaking down New England's 33-26 loss to Minnesota on Thursday. 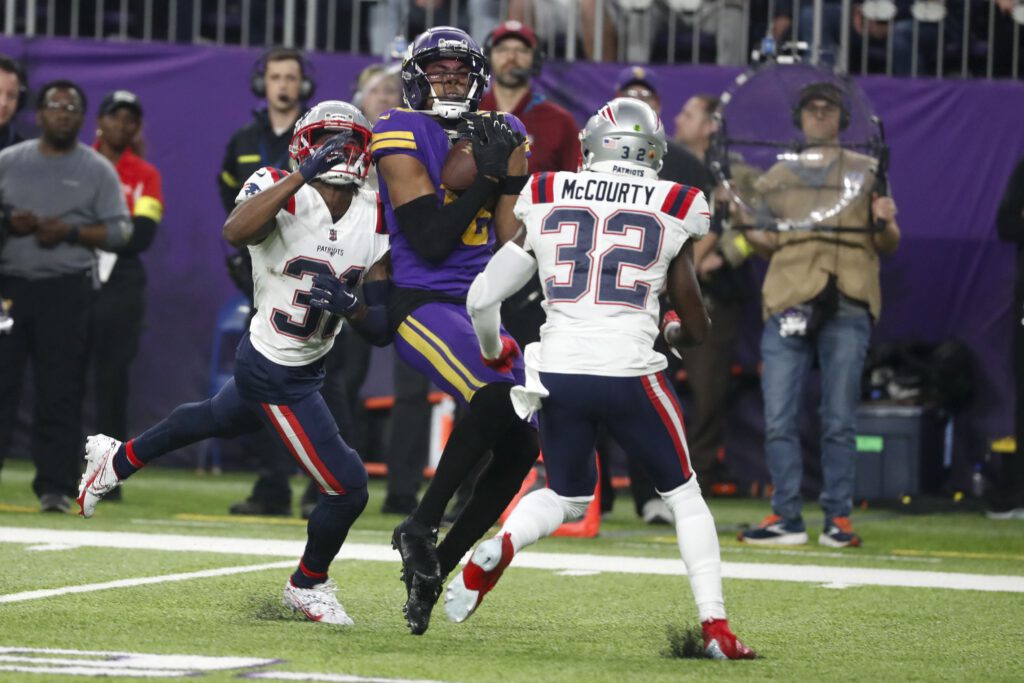 Despite a tightly contested 33-26 loss to the Vikings on Thanksgiving night, the Patriots finally have something to look forward to on the offensive side of the ball for the first time in 2022.

Don’t get me wrong-  moral victories stink, but New England finally found a groove on offense, and that was encouraging to see. Here’s a look at the scoring drives from Thursday night:

Here are my five takeaways from New England’s Thanksgiving night loss to the Vikings:

5. Justin Jefferson is the NFL’s Offensive Player of the Year.

The idea has always been that Bill Belichick will take away a team’s greatest strength and force you to beat them with the rest. That was the farthest thing from the truth on Thursday night. Jefferson led the Vikings with 9 catches for 139 yards and a touchdown on Thursday. The Patriots had zero answers for him, and were simply the next victim on his way to winning the Offensive Player of the Year trophy.

4. The Patriots’ offensive struggles are not Mac Jones’ fault.

Mac Jones was sensational tonight. He completed 28 of 39 attempts for 382 yards and two touchdowns, and also made his best throw of 2022:

Not only did Jones play well, but he finally showed that he can get through the Patriots’ shortcomings on offense. He ran the offense soundly and was awfully close to leading New England to victory with his arm.

Of course, once New England’s offense finally figured it out, the defense put up a dud. I already mentioned Jefferson’s monster game, but they also allowed Adam Thielen to catch 9 balls for 61 yards and a TD and T.J. Hockenson to catch 5 calls for 43 yards and TD.

On top of this, they also only sacked Kirk Cousins once despite the Vikings missing their best offensive lineman in Christian Darrisaw. There were, of course, some good things – but overall the defense needs to be better – especially when the offense has success.

I am a card-carrying Kirk Cousins hater, but I can admit that he had a day for himself. Thanks to a complete lack of pass rush from the Patriots, the Vikings QB was able to stand upright and torch New England’s secondary to the tune of 299 yards and three touchdowns. He also had a completion percentage of 81% and a passer rating of 116.1.

Cousins normally only plays well in the 1pm window – but he put that idea to rest tonight.

With the offense still trying to gel and the defense allowing 33 points, the Patriots had plenty of opportunities to win this game.

However, there were 5+ plays on special teams that completely turned this contest on its head:

The Patriots have always been known for their solid special teams – heck they won last week’s game against the Jets thanks to a punt return touchdown.

On Thursday, however, the special teams is what lost it for them.

New England is now 6-5 and although they’re now only one game over .500, they still have a viable chance to make the postseason.

They also only have one week to prepare for their next opponent, as they welcome the Bills to Foxboro next Thursday for a primetime matchup. We’ll have you covered with all the latest news and updates from