Greenberg on Celtics trading for Anthony Davis: ‘Don’t Risk It’ 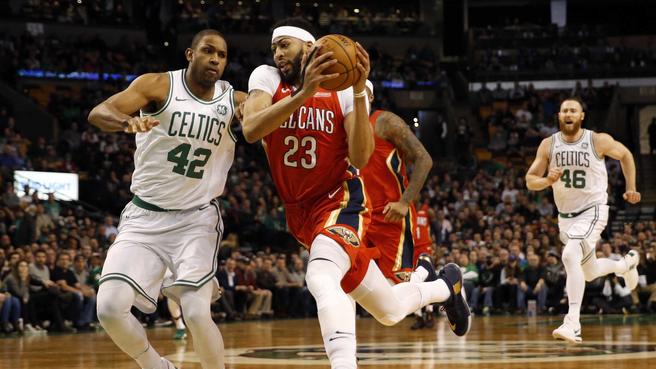 One year ago, Celtics fans drooled over the thought of seeing Anthony Davis in a Celtics uniform.

A lot has transpired since then, including a deep playoff run by a Gordon Hayward and Kyrie Irving-less Celtics team that has skewed some local analysts’ opinion of seeing Boston trade for the game’s most dominant big man. Barstool Sports’ Dan Greenberg fits in with this group.

He dove deep into the topic when he joined the hosts of the Causeway Street Podcast last week. In light of a recent report by ESPN’s Stephen A Smith, who said Davis not only wants out of New Orleans but sees the Warriors, Lakers and Celtics as potential suitors.

While the Celtics may have the edge over Golden State and Los Angeles when it comes enough assets to pull off a deal, Greenberg thinks Boston is better off waiting for Davis to become a free agent rather than trading for him now.

“If I’m them [New Orleans], I’m asking for everything under the moon,” Greenberg said. “I’m asking for both Tatum and Jaylen [Brown], I’m asking for the Sacramento pick, and they need to figure out how to make the money match so it’s probably going to have to include Smart.

“For me, Anthony Davis, I think, makes $27 million a year — it’s just not worth it to make the money match when you can just wait it out. He’ll hit the market when he’s 27 and then by that time Horford’s money won’t be on your books, you can just pay the dude [Davis].”

For the Celtics to acquire Davis without giving up a bulk of their rotation players, matching salaries would be a huge hurdle. If Boston ultimately decides to stand pat between now and 2021 — when Davis will become an unrestricted free agent — they will risk seeing him dealt elsewhere. However, Greenberg says it will be worth the wait in the long-run instead of parting ways with too many talented players.

It’s a similar dilemma the Warriors would find themselves in if they were to deal for Davis today.

“I say don’t even risk it, don’t blow up your team because then you’re just the Pelicans of the east coast,” he explained. “Great, you have Anthony Davis and maybe one more person but you’ve gotten rid of your future and I think the same thing for Golden State. They have the cap space to trade for Anthony Davis versus signing him outright.