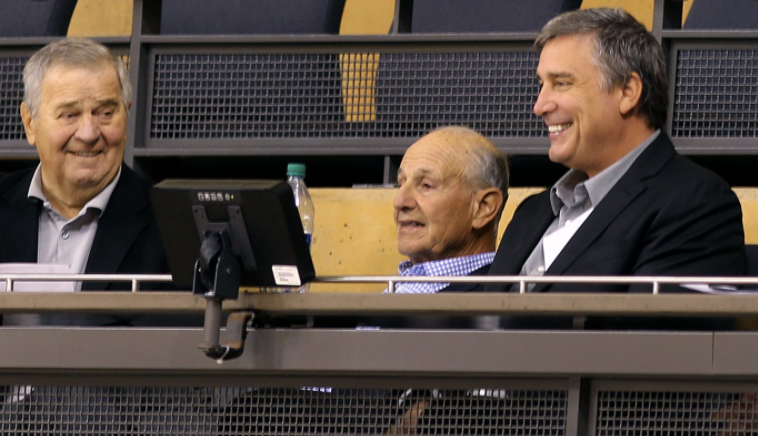 No one has overseen more success or bigger personalities in the history of the Boston Bruins than Harry Sinden.

Now 87, Sinden is being honored this month, along with other members of the 1969-70 Bruins team that won the Stanley Cup when Bobby Orr went sailing through the air on May 10, 1970 at Boston Garden. He has coached the likes of Bobby Orr, Derek Sanderson, Johnny Bucyk, Gerry Cheevers. He helped assemble a roster of the likes of Ray Bourque, Adam Oates, Mike Milbury and Terry O’Reilly.

Between his coaching and administrative career, Sinden, now a senior advisor to owner Jeremy Jacobs, has seen the Bruins win three Stanley Cups (1970, ’72, 2011) and reach seven others.

But if you ask Sinden, the trade for Cam Neely in 1986 for Barry Pederson remains one of the best moves he ever made for the franchise. And not because he traded Pederson. No, that deal was great because of the impact Neely has made to the franchise on and off the ice.

Sinden not only coached the Bruins to Cups in 1970 and ’72, he – like Bill Belichick of the Patriots – served as the team’s top player personnel executive as the team’s general manager from 1972-2000. That’s 28 years of roster building. He knew what it would take to move from an ice-level view of the game as a player, coach and GM to watching the game in the press box. He knew almost immediately that Neely had what it took to not only make that transition but make it almost seamlessly.

“A lot of people wonder about certain players whether they could make a coach a good executive or something like that,” Sinden told me. “And no one seems to have the answer and they just take a flyer and some work and some don’t. But no one that I dealt with over the years was so, so in love with the game of hockey as Cam Neely.”

Exactly how much did Neely love hockey?

In one memorable incident in 1994, Neely required over 10 stitches for the tip of his right pinky finger when it was severed through his glove. After treating the injury early in the second period, Neely received the stitches, and returned to the game later that period. Neely earned an assist in a game the Bruins lost, 2-1, to the Devils.

Neely’s intense efforts to come back time and again from his devastating injuries were duly recognized when he was awarded the Masterton Trophy after the 1993–94 season. The Bruins have since retired his No. 8, making him the tenth player to have a number retired by the team.

“He took a terrific blow to one of the spectacular careers, that could have been and was, and took a few years off and just could not stay away from it,” Sinden said. “And I knew that.”

That “terrific blow” was a series of unfortunate events that began on May 3, 1991, during Game 3 of the 1991 Prince of Wales Conference Finals, when he was checked by Ulf Samuelsson, and injured on the play, and was hit again to the knee in game 6. Compounding the situation was the fact that Neely developed myositis ossificans in the injured area. The injury kept Neely out of all but 22 games of the next two seasons, and Neely would only play a total of 162 NHL games for the remainder of his career after the hit because of knee trouble.

In the 1993–94 season, Neely scored his 50th goal in his 44th game. Only Wayne Gretzky reached that milestone in fewer games. (David Pastrnak was well on his way to becoming the first Bruin since that season to reach 50 before the season was put on pause. He stands at 48 through 70 games). Neely was regularly listed as a healthy scratch in alternate games in order to rest his ailing knee, but it would be a degenerative hip condition that forced Neely to retire after the 1995–96 season at the age of 31.

Still, with all the accolades, Neely and Sinden would squabble quite a bit over mostly hockey-related issues.

“We always had a good relationship,” Sinden admitted. “We fought a lot, certainly not on the ice because you wouldn’t be talking to me today if we did. We’d fight a lot over certain things, but he wanted to be back in the game. All he wanted to do was be involved in hockey, so it’s hard to find a guy like that, it really is.”

Glory for some ex-players till they discover the hours and hours needed to be successful.

“(In some cases) they want the job and there’s good money in the job, and there’s prestige and there’s public (adoration) really, and they take it for that reason.”

Neely was not that to Sinden.

“I know Cam because I brought him aboard,” Sinden said. “Mr. (Jeremy) Jacobs wanted him onboard. I said, he’s the best figure in this city right now, in terms of sports. He’s so charity-minded and he does everything and he’s a great player, and we got to get him back in the organization. And finally, we did.

Then Sinden and Jacobs had to agree on the responsibilities and title for Neely.

“We didn’t know what to what title to give,” Sinden said. “I said you can’t give them some title like, you know head of Northwest scouting or some stupid thing. He’s a vice president of the team and we’ve got to teach him the business, and he’ll learn in a hurry, which he did.

“I feel proud of him. The trade worked out good, but those trades are always lucky or not lucky. So, it worked out really good and Cam was a terrific, Hall of Fame player. But his presence in this city has been spectacular, and so I was glad to see him end up with our team and doing the job he is.”