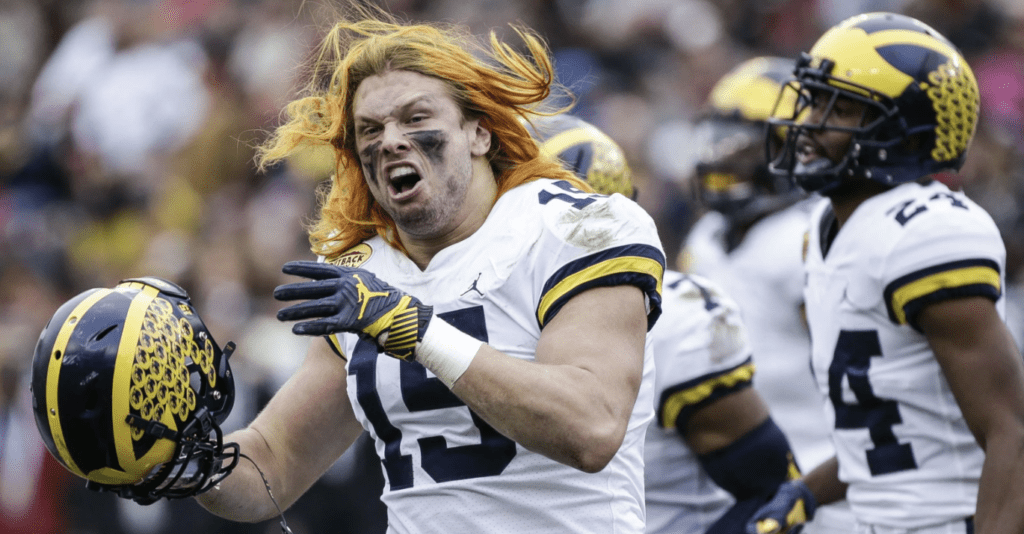 FOXBORO — The Patriots made some noise early in the draft on Friday when they traded up from 56 to 45 to draft CB Joejuan Williams out of Vanderbilt who I profiled HERE. The Pats initially had 4 more picks on the day (64, 77, 97, and 101).

The Patriots swung a series of deals and ended up drafting 3 more players on Friday. Here’s a look at who they got and some of the intriguing qualities those players bring with them to Foxboro.

In the interest of avoiding stereotypes, we’ll avoid Winovich’s “high motor” and discuss his hand technique as a pass rusher.

Over the past two seasons, Winovich has 109 quarterback pressures, which ranked fourth in all of college football and was also pretty good against the run too.

At the end of the line, Winovich has efficient and powerful hands with a wide variety of techniques. On the play above, Winovich uses a snatch move to beat the tackle and sack the quarterback. With this move, Winovich starts by converting speed to power in a bull rush establishing inside hand positioning on the tackles chest then uses his grip strength to pull the tackle towards him to get him off balance before turning the corner.

Winovich is terrific at playing the game of rock-paper-scissors with offensive tackles reacting with a quick mental process to counter with the perfect pass rush move.

Much like cornerback, the Patriots didn’t need another running back, but Harris’ value at the end of the third round was too good to pass up.

Harris doesn’t possess breakaway speed, but he has incredible vision between the tackles and finishes his runs with power.

On this long run, Harris does a great job of reading the linebacker at the second level to make an initial cut at the line of scrimmage that will lead to an explosive run. The linebacker jumps into the play-side A-Gap as the blocking scheme develops to the offenses right. Harris sees that and makes a decisive decision to cut back inside in this zone blocking scheme. He squeaks through the line, gets himself into space and then it takes three tackle attempts to bring him to the ground.

Cajuste had a second-round grade in my system based on the tape, but substantial knee and quad injuries saw him fall to the end of the third round.

In the pass-happy West Virginia offense, Cajuste did not allow a sack in 394 pass-blocking snaps.

Along with above-average foot speed, Cajuste’s hand usage and upper-body strength stand out as clear strengths of his game.

Here, Cajuste uses a vertical set to cut off the angle for the pass rusher. As a result, the defender counters with a long arm to power his way through Cajuste. The new Patriots tackle reacts to the long arm by chopping down with his inside hand to disengage forcing the defender to the ground, and like every good offensive lineman, finishes by laying on top of the defender.

Cajuste played mostly on the right side for the Mountaineers but should offer swing tackle versatility to man either tackle spot.