It’s wild to think that a team signing a 29-year-old, former All-Pro linebacker on May 15th could be a divisive issue. Then again, this isn’t any linebacker, and this isn’t just another team. That’s right, the Patriots set up yet another reunion (Bolden, Watson) this offseason, signing former second-round pick and Super Bowl XLIX champion Jamie Collins on Wednesday. Overall, this shouldn’t come as much of a surprise; there were rumors at the deadline last fall the Pats were looking to make a move for Collins. Now, they add him to the roster without having to give up a draft pick, and with the chance to take a long look at what kind of player he has become since last playing in New England in 2016, before they commit a 53-man roster spot to him.

So why all of the contention? Despite Collins totaling 104 tackles and 4 sacks last season, those who have closely watched him in Cleveland will tell you he looked lost too often to feel comfortable, and is still plagued  by the kinds of mental mistakes that chased him out of Foxborough. However, it is important to remember, like mentioned above, that the Patriots are not committed to Collins for the long-term, or even short-term.

For a second, let’s view this not as the return of Jamie Collins to Foxborough, but in terms of a situation very common to those who follow the Patriots. Bill Belichick has brought in a former high draft pick linebacker, who never reached his potential in his previous spot due to misuse, and will try and see if he can salvage some of that potential at a discounted price. That’s what we’re looking at here with Collins. People want to compare this signing to the return of Patrick Chung, but in reality it is more similar to the signing of guys like Jabaal Sheard, Akeem Ayers, or even Kyle Van Noy. Belichick was able to bring the best out of those players when everybody else thought they were done, who’s to say he can’t do the same with Collins? The fact his first stint was with the Patriots is something that may be drawing more focus than necessary from those trying to analyze the situation. After all, that was a long time ago. Three years is an eternity in sports.

The thing that is tough to understand about those who don’t like that move is, do the Patriots have a better way to use that roster spot? Again, Collins is signed to the 90-man training camp roster, and far from guaranteed a spot in the final 53. Nothing against the Patriots UDFAs, but are they really better off with an extended look at a guy like Tyree St. Louis or D’Angelo Ross? (UPDATE: Frank Herron was cut to make room for Collins) On another level, I would ask those who question the move how its different than the signing Austin Seferian-Jenkins, a contract that has been popular among Patriots fans? Once again, you have a former second round pick who has failed to live up to his potential and has had a habit of inconsistent play. If Bill Belichick and the Patriots are willing to give him a look, it makes complete sense they’d want to kick the tires on Collins. 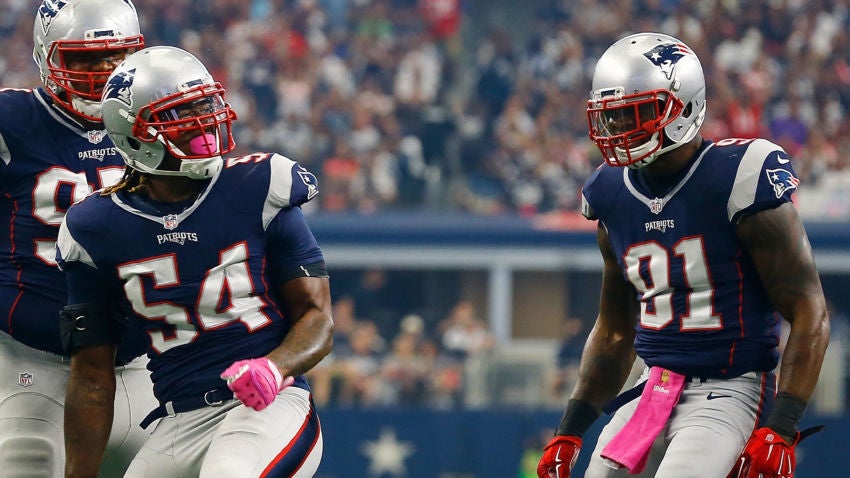 Just to be clear, this is not an endorsement of Collins making the team. In fact, as things stand right now it appears he’s on the outside looking in at the final roster. That being said, the Patriots linebacker depth is stronger and more experienced than it was yesterday. Between Dont’a Hightower’s injury history and Ja’Whaun Bentley coming off a serious injury of his own, that’s not a small detail.

The question is, will Collins be ok with a reduced role? Coming off of a season where he played 91% of defensive snaps for the Browns, will a guy who reportedly clashed with coaches in the past be ok taking a backseat? He may have to be. He was a free agent this late into the process for a reason; clearly he’s not very highly thought of across the league right now. Washing out of Patriots training camp could very well mean the end of his football career. Don’t think Belichick doesn’t know that, either. Both sides know what is a stake here, and each will be able to use it to their advantage. Collins, obviously, can use a strong season to jumpstart the second act of his career at 29-years old. Meanwhile, Bill Belichick the Patriots can use this to make sure he falls into line with they role they want him in this time around. And if together, they can recapture even some of the magic from Collins early career in New England, it will go down in the books as another Bill Belichick reclamation project and an absolute free agency steal.

Lazar’s Ten Most Important Patriots in 2020: No. 9, Lawrence Guy

Lazar’s Ten Most Important Patriots in 2020: No. 9, Lawrence Guy