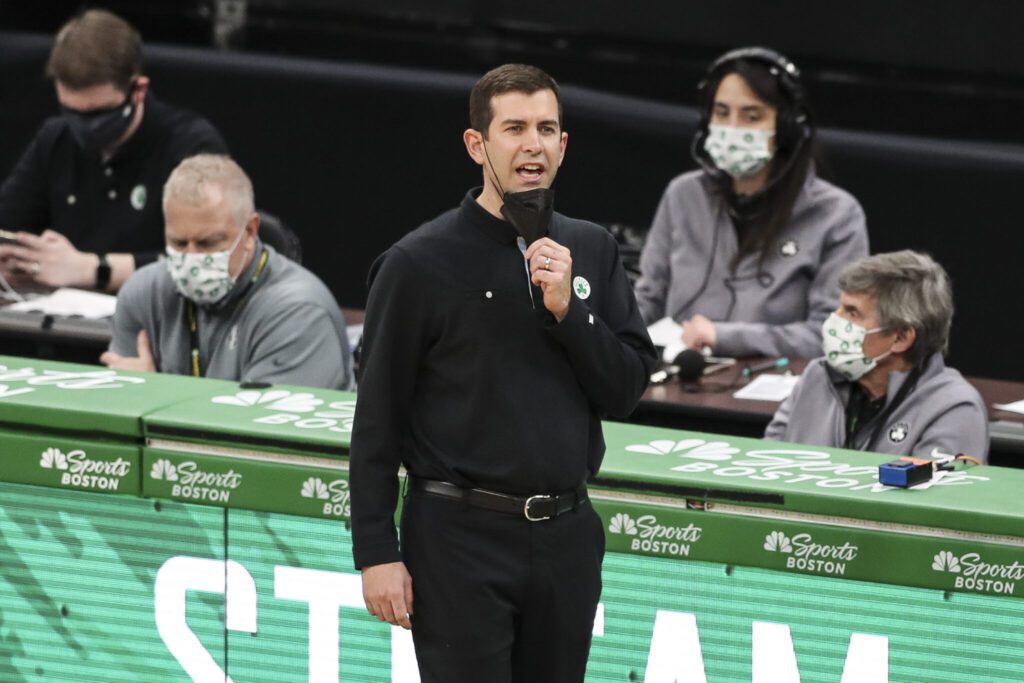 BOSTON, MA - MARCH 04: Head coach Brad Stevens of the Boston Celtics lowers his mask to call out against the Toronto Raptors at TD Garden on March 4, 2021 in Boston, Massachusetts. NOTE TO USER: User expressly acknowledges and agrees that, by downloading and or using this photograph, User is consenting to the terms and conditions of the Getty Images License Agreement. (Photo by Adam Glanzman/Getty Images)
Share
Facebook Twitter Email

Prior to Boston’s four-game winning streak, many Celtics fans and some media members were putting a good bulk of the blame for the team’s struggles on head coach Brad Stevens. Whether it was criticizing his rotational choices, testing of different lineups on a nightly basis, or the heavy usage of double-bigs in the starting lineup, Stevens drew a great deal of ire in the court of public opinion.

It can be debated that Coach Stevens is responsible to some extent, but the most radical of Celtics fans were calling for his removal, claiming he lost the locker room or didn’t know how to coach players of Jayson Tatum and Jaylen Brown’s caliber.

In an episode of The Bob Ryan and Jeff Goodman Podcast on CLNS Media, they weigh in on calls for Brad Stevens to be fired. Jeff Goodman talked to two NBA players who said the Celtics would be “crazy” to fire Brad. The locker room dynamic, the source said, is harder to read and there may be a case if he’s lost the locker room as Gary Washburn has reported, but the players said there is no better coach Boston could replace Stevens with.

“They both were like, ‘are you out of your mind?'” Goodman said. “You’re not getting anybody better. Unless he’s lost the locker room completely, you’re crazy.”

Ultimately, Stevens is the best option on the market for Boston; there isn’t going to be another coach who is unemployed or working on another team as an assistant that will swoop in and be a cure-all for Boston’s issues. With an overall record of 337-263 (.561) over the span of 7 seasons, Stevens is an experienced coach that has earned some leeway, especially given the absences this season compiled by COVID-19.

“Is there a team out there that feels that Jaylen Brown is or could be a franchise player? A top 10 player in the NBA?” Goodman said. “If that is the case…why not look and see what you can get for him now?”

He proposed that Boston should consider a Brown-for-Bradley Beal swap.

In the full episode, Ryan and Goodman touched upon some trade ideas including Bradley Beal as well as veterans JJ Redick and PJ Tucker.