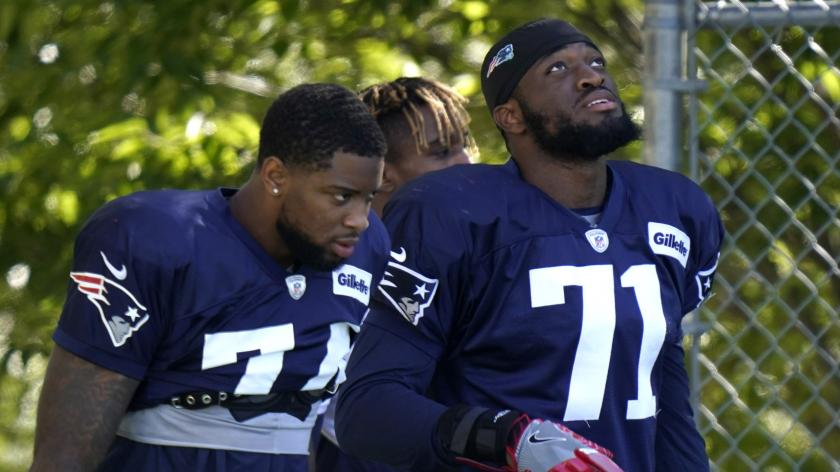 The Patriots aren’t usually a team that relies heavily on rookies at key positions, especially in recent seasons, but the 2020 rookie class figures to be an exception to the rule.

Following the initial wave of free agency, New England knew they needed a strong draft to replenish their roster in several areas where veteran players moved on for big paydays.

Tom Brady’s departure got all the attention, but the team internally was more focused on the positions they hit on in April, such as safety, linebacker, tight end, and offensive line.

Although nobody could’ve predicted it would happen this fast, New England’s rookie class will take on critical roles on their defense and at tight end this season.

Playing as a rookie under Bill Belichick isn’t as unprecedented as it seems, even though it hasn’t happened much recently due to Belichick’s spotty drafting and a veteran roster.

The players who see the field in a large capacity as rookies are usually high draft picks, though; it’s not as prominent among players drafted after the second round, and it takes a special talent to carve out significant playing time in their first seasons.

Others contributed as role players, such as 2019 third-round pick Chase Winovich, who had a terrific rookie preseason but still only played 28.9 percent of the snaps on defense because of the vets ahead of him on the depth chart.

This year’s rookies don’t have the benefit of learning behind a group of veterans like Winovich, running back Damien Harris, and others did a year ago; they’ll be thrown into the fire right away.

With that in mind, we’ll take you through each Pats rookie that figures to play a prominent role this season and how we see the coaching staff using them on the field:

Kyle Dugger – the Pats’ top pick might play the least out of the entire group, but Dugger still can make an immediate impact. Dugger’s versatility, athleticism, and playmaking instincts stood out right away in camp. Whether he was playing deep or in the box, he was around the ball, showing off good range and ball skills as a deep zone defender and sticky man coverage on tight ends. Plus, he was decent in run support, even if his mental processing in a new role in the box will take time to catch up with his physical tools. The Patriots could roll with veteran safeties Devin McCourty, Terrence Brooks, and Adrian Phillips while Dugger transitions from the DII level to the NFL. However, it won’t be easy to keep the rookie off the field. Dugger should fit in well, inserting into the box to guard tight ends, playing as a “robber” at the intermediate level, or as a deep post safety in New England’s man coverage schemes. He’ll also have a role on special teams, both covering kicks and potentially returning them. Dugger was a standout punt returner at Lenoir-Rhyne and got some opportunities as a kickoff and punt returner in practice. The 37th overall pick in April’s draft has plenty of support from McCourty, Brooks, and the Pats coaching staff as he tries to adapt to the NFL game and learn the Chung role. The sky’s the limit with his athletic profile if Dugger can put it all together.

Josh Uche – Patriots head coach Bill Belichick and outside linebackers coach Steve Belichick heaped plenty of praise on Uche this week. Uche’s transition from Dom Brown’s defense at Michigan to Belichick’s system should be as easy as it gets for a rookie; there’s plenty of overlap between the two schemes. Since they drafted Uche, we’ve pointed out the three primary locations the Pats play their linebackers at: off the line, in-line, and on the edge, and Uche already has experience at all three spots from his college days. As a result, the Pats tossed Uche into the deep end of the pool by cycling him through all three alignments, and he’s handled it well by all accounts.

Also love that you can stand Uche up over the guard and have him rush from the interior. Overpowers the guard and bullies his way into the backfield. pic.twitter.com/ZxdQN0FRhK

Although he had plenty of rookie mistakes, especially from off the line against the run, Uche has the explosiveness and instincts to make splash plays behind the line of scrimmage. He tallied multiple quarterback pressures rushing off the edge and blitzing up the middle, shot gaps and guessed correctly in run defense at times, and even made some plays in coverage. We know the schemes the Pats use in the front seven are effective when executed properly. Things like in-line blitzing from a two-point stance, stunts and other pick plays, and simulated pressures worked like a charm for New England’s defense over the last two seasons. Uche, and Jennings too, just need to play well within the system and not try to be heroes, much like their predecessors. Although it sounds easier than it is, there’s reason to believe that Uche can provide impact plays from the first and second levels of the defense. The Pats sure need him to force negative plays to help replace Van Noy, Collins, and Hightower.

Anfernee Jennings – the story with Jennings is similar to Uche’s, as Belichick’s longtime friend Nick Saban uses comparable schemes and techniques at Alabama. However, Jennings projects in a bit of a different role. Although he spent time at inside linebacker in camp, Jennings is at his best in Van Noy’s role as an edge defender on the line of scrimmage. From there, the Pats rookie looks comfortable both coming forward and dropping off the line. He was particularly impressive while in conflict as a read-defender on option plays and dropping into coverage.

This was nice from a two-point stance. Gives a little inside hesitation move to get the left tackle to pause a beat. Goes right around his edge for the strip sack. pic.twitter.com/VUhqywdUYn

There’s less pass-rushing upside with Jennings compared to Uche, but his fundamentally sound technique to set the edge and rush the passer while being mindful of where the quarterback is in the pocket stood out. He also has long arms and a sturdy frame to challenge offensive tackles with power. Like Uche, the success of Jenning’s rookie campaign will come down to how much he can handle mentally. Physically, both Pats rookie linebackers have the tools to hold up in the league. How quickly they can get up to speed and handle the NFL game’s intricacies will decide how successful they are filling some gigantic shoes so early on. Even their jersey numbers selections, Jennings in Collins’s no. 58 and Uche in Van Noy’s no. 53, don’t hide from the fact that they’re replacing those two in the Pats defense.

Devin Asiasi – as we noted earlier, future Hall of Famer Rob Gronkowski was eased into the Pats offense in his rookie season before becoming a full-timer in the second half of the year. Expecting Asiasi to be anything close to Gronk is unfair, but the Pats desperately need him to contribute to the situational passing game. Third down, red zone, and other matchup-based situations are where the Patriots need Asiasi to thrive, and he flashed the necessary receiving skills to contribute in those areas.

Asiasi’s separation quickness and footwork at the top of his routes make him a difficult cover between the numbers. He snaps his routes off and “gains ground” out of his breaks, which helps him get open. Asiasi also showed some promise as an in-line blocker. However, that’s a difficult ask for a rookie to handle early-down run-blocking responsibilities and make an impact as a receiver. Ultimately, Asiasi will be the best New England has to offer as a pass-catching weapon at the tight end position.

Dalton Keene – Keene’s number 44 jersey tells us that he will be used as more of an H-back rather than a traditional tight end like Asiasi, but he’ll still be vital. With Newton under center, the Pats will likely utilize an off the line H-back that can slide into the flats as a receiver or lead-block in the running game from various angles. The deceptions of an option-based rushing attack are critical to its success, as is the misdirection element, and Keene’s athleticism and experience as a blocker could unlock many of those schemes for Josh McDaniels.

For example, the Houston Texans use a “naked” package where defenders need to choose between multiple threats. Baltimore also uses different “full house” and pistol formations that present the quarterback with several options to attack the defense, sending tight ends into motion all over the formation. Keene’s skill set should allow him to be featured in those schemes and present him with opportunities to run after the catch. Although he’s still in the developmental stages as a downfield threat, where Asiasi is more polished, Keene’s skills fit the type of offense that New England wants to be with Newton at quarterback.

Caash Maluia – the sixth-round pick out of Wyoming was initially waived by the team and signed to the practice squad. But the Pats promoted him to the 53-man roster after placing Damien Harris and Beau Allen on injured reserve. Inside linebackers coach Jerod Mayo didn’t mince words when he said that Maluia is still learning to process the game at an NFL speed, but even when he makes mistakes, he’s still playing fast. We’d also like to see Maluia take on blockers with better technique and shedding skills. Still, the former college safety has good instincts and ball skills in coverage, while his sideline-to-sideline speed helps him clean up the trash against the run. Plus, with 4.53-speed at 248 pounds and plus-open field tackling skills, Maluia could become a regular on special teams. There’s a chance that Maluia doesn’t play at all on defense this season, but if he does, one can expect him to backup Bentley at the MIKE linebacker spot.