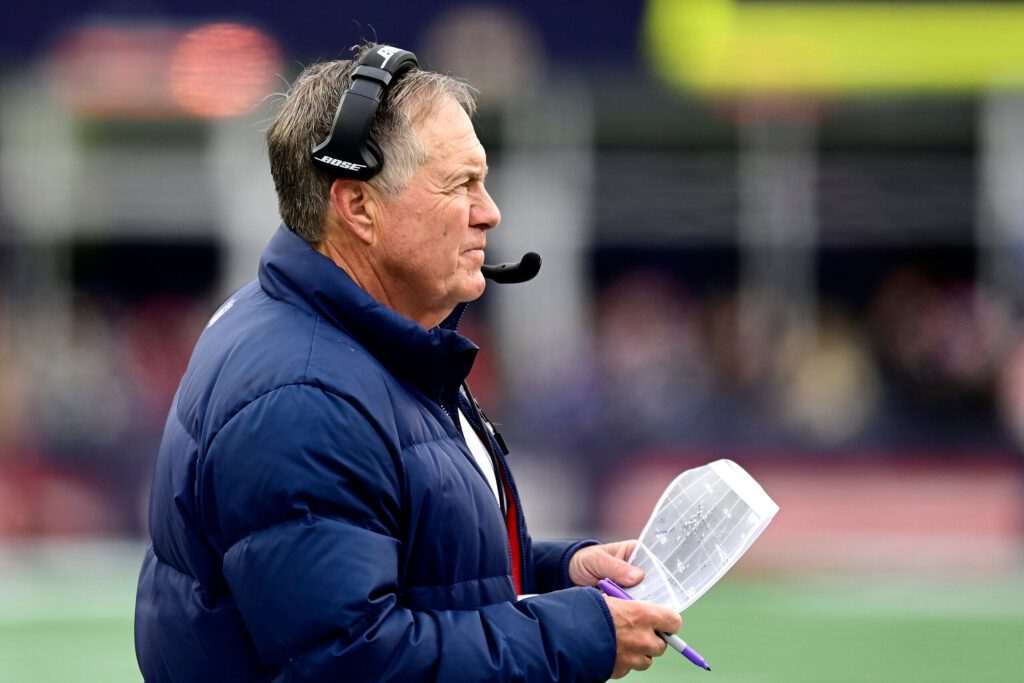 Recent history for the Associated Press’ Coach of the Year award is typically to give the hardware to the latest flash in the pan coach that is taking the NFL by storm.

There are always exceptions, but three out of the last four winners were coaches that took bad teams and turned them around in the early stages of their coaching tenures. Cleveland’s Kevin Stafanski (2020), Chicago’s Matt Nagy (2018), and Los Angeles’s Sean McVay (2017) won the award in their first seasons as head coaches.

Those coaches often fall back to earth after winning the award, some are even fired shortly after winning it (Garrett, Rivera, possibly Nagy), and then there are the rare exceptions where the old-reliables break through.

After 12 weeks, Patriots head coach Bill Belichick deserves Coach of the Year as a future Hall of Famer that we knew was good once again flexing on the league.

Although the AP doesn’t give out the award, Belichick also has an excellent case to win Executive of the Year as voted on by the Pro Football Writers Association each year.

In one offseason, Belichick took a Patriots team that went 7-9 and missed the playoffs for the first time since 2008 a year ago back to the top of the AFC standings.

Almost all of his offseason additions are contributing from the Pats’ 2021 rookie class (Mac Jones, Christian Barmore, Rhamondre Stevenson) to Belichick’s splash-moves in free agency (Matthew Judon, Hunter Henry, Kendrick Bourne). And it still feels like there’s another level for some of the new additions to reach. 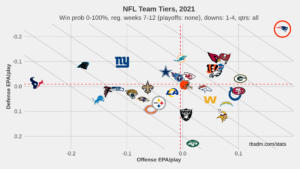 During their six-game winning streak, the Patriots are out-scoring their opponents by 148 points and are head-and-shoulders above the rest of the league in both offensive and defensive efficiency.

Since NFL free agency began in the mid-90s, teams that went out and “won the offseason” as the Patriots did by spending $163 million guaranteed don’t normally succeed. In fact, the strategy often blows up in their face.

Even team owner Robert Kraft was skeptical of Belichick’s plan, saying, “I do remember we always made fun of the teams that spent a lot in the offseason.”

Although the veteran additions and holdovers from the Brady years are providing a solid foundation, the main reason the Patriots turned things around so quickly is that they found their quarterback. 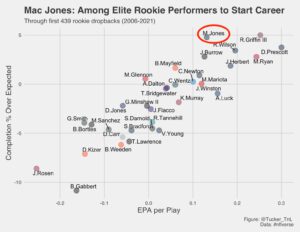 With the 15th overall pick in last April’s draft, Belichick took the fifth quarterback off the board in Alabama’s Mac Jones, and Jones is having one of the best rookie seasons we’ve seen in years.

After a quick adjustment period to the NFL game, Jones trails only Aaron Rodgers in expected points added per play and is fifth in completion percentage over expected since Week 4.

Mac deserves credit for developing his style of smart decision-making and excellent downfield accuracy at the pro level in his rookie campaign.

But Belichick, and offensive coordinator Josh McDaniels, have Jones seeing the field like a veteran quarterback and understanding the big-picture goals of their passing concepts.

On Jakobi Meyers’s 38-yard reception against the Titans, the Pats’ rookie hit Meyers on a route designed to clear out the coverage rather than get the ball on that particular play. 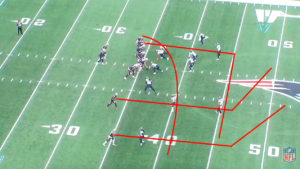 With tight ends Hunter Henry and Jonnu Smith on the field, the play design is a levels concept where Smith runs a shallow crosser, and Henry works the intermediate in-breaker. Then, Meyers and Nelson Agholor are on a “dino” or double post combination to clear out the safeties.

As we roll the play, the Titans match the routes in cover-four or quarters. The safety to Jones’s left responsible for a deep quarter jumps Henry’s route, leaving Meyers out-leveraging Titans safety Kevin Byard on the inside post. With nobody deep on that side of the field, Jones breaks off the levels read and beats Byard over the top with the downfield throw.

Along with dissecting the coverage after the snap, Jones manipulates coverage post-snap thanks to him knowing the “why” of every play. 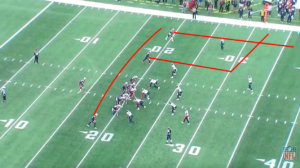 In this example, the Patriots dialed up a sail concept into another quarters structure where Mac makes a subtle play in the pocket to create an even bigger void in the zone coverage.

With Kendrick Bourne’s motion into the flat, the Pats are drawing the short zones to Bourne to open up the corner route for Meyers, who is working downfield into the pocket of space created by Nelson Agholor’s vertical route. Jones points his eyes and feet towards Bourne to influence the underneath zones towards Bourne, then comes back downfield to Meyers.

Then, New England plays to Jones’s strengths as a thrower between the numbers while marrying their running game to effective play-action designs to create chunk plays.

This season, Jones is tied for seventh among 32 qualified quarterbacks in passing yards per attempt off play-action concepts (9.5).

Here, Jones again carries out the fake to manipulate the linebacker level out of the passing lane. First, he sells the run fake, then the motion by eying Bourne in flat, which gets #55 Jayon Brown to freeze long enough for Mac to float the ball over the Titans linebacker to Smith on the crossing pattern.

Lastly, with Jones, he’s wise beyond his years in terms of pre-snap processing as well.

In this play, the Pats use a late motion into an empty formation to tip off man coverage, and Mac recognizes the assignment exchange puts another defender into the rush. Jones has a mirrored smash concept where he has under routes with a corner pattern at his disposal. Before the ball is snapped, Jones finds the best matchup with Bourne on a safety (Byard) and gets the ball out “hot” to beat the blitz for a touchdown.

Belichick developing Jones would normally be enough for the league to recognize a job well done by any coach, but that’s just the tip of the iceberg for the 8-4 Patriots.

New England is extremely well-coached in all three phases, and offensively, they’re helping Jones by keeping him clean with an offensive line that ranks seventh in pass-blocking efficiency.

Plus, Belichick coaches the skill players on the little intricacies of the game that go a long way.

On Kendrick Bourne’s 41-yard touchdown, all the little things added up to an improbable score. According to NextGen Stats, Bourne had a touchdown probability of 0.3% on the play.

After nearly fumbling in Week 2 and eventually coughing it up in Week 8, Bourne, who is having a career year in his first season with the team, credited Belichick for his improving ball security.

“When I first came in, I was swinging the ball everywhere, kind of playing my style of play, and he [Bill Belichick] corrected it fast. He taught me to keep the ball high and tight at all times, and eventually, my body just started adjusting to keeping the ball right here,” Bourne said.

“It’s just about securing the ball, having ball security. We emphasize no turnovers, so it’s just a blessing that I can improve in different ways and be versatile for this team. It’s just dope how they’re developing me.”

Bourne now ranks fourth in yards after catch over expected this season, per NextGen Stats, and there was another little detail with some help from a friend that stood out on the play.

As Bourne was trying to turn upfield, Meyers set a legal pick on Titans safety Amani Hooker to spring Bourne down the sideline. In the NFL rulebook, players aren’t allowed to block “with forcible contact toward or parallel to his own end line.” Meyers, of course, was moving toward his own end line, and Belichick, of course, coaches everyone up on the rule.

“I knew I can’t hit him too hard because then they’ll throw a flag, so just go in there and do a thing we call save-it blocks — throw my shoulder but don’t hit him. Just get (Bourne) to the next level and let him do his magic,” Meyers said after the game on Sunday.

After a relatively slow start integrating new pieces from Belichick’s home-run 2021 draft class and several “hits” in free agency, the Patriots offense trending towards the top ten in most metrics (11th in EPA).

Following two excellent performances in a five-day span, we previously wrote about Belichick’s vastly improved defense that’s realizing its potential thanks to an in-season adjustment to more zone coverage.

Since making the switch after losing in Week 6 to the Cowboys, the Pats defense is first in EPA per play allowed and is allowing the lowest success rate on opponent pass attempts in the NFL over their last six games.

Despite a big day for the Titans’ rushing attack, the Patriots defense forced four turnovers and shut out Tennessee’s offense in the second half this week to hold their opponent to 13 points.

After a turnover-free game with four takeaways, the Patriots now rank second in the NFL in turnover differential (+10), indicating a well-coached team with excellent fundamentals and ball security.

They still showed how well-prepared they were to handle certain aspects of the Titans’ offensive scheme, such as their league-leading screen game with veteran linebacker Dont’a Hightower blowing up the screen to force quarterback Ryan Tannehill into a short scramble.

While splash free-agent addition Matthew Judon brought his season-total in sacks to 11.5 (third-most in NFL) with a schemed one-on-one against the Titans’ vulnerable right tackle as another standout rookie in Christian Barmore occupied multiple blockers.

From coaching fundamentals, techniques, rules, and player development, Belichick is putting on a coaching clinic that has many coaches and execs saying the best-coached team in the NFL resides in Foxborough, Massachusetts.

The Patriots’ head coach hasn’t claimed the AP’s Coach of the Year honor since 2010, and despite his unprecedented success, Belichick has only won the award three times in his career.

Although Belichick isn’t much for individual awards, he prefers team accomplishments like championships, we’ll make the case for him here.

Let’s take a break from the latest fad coaches to recognize a coaching giant still at the top of his game.

If any other coach had these results, they’d be running away with the award already, don’t let it pass over because we expect it from Belichick.