Lazar: Patriots’ Passing Offense Has Much More Than a Cam Newton Problem 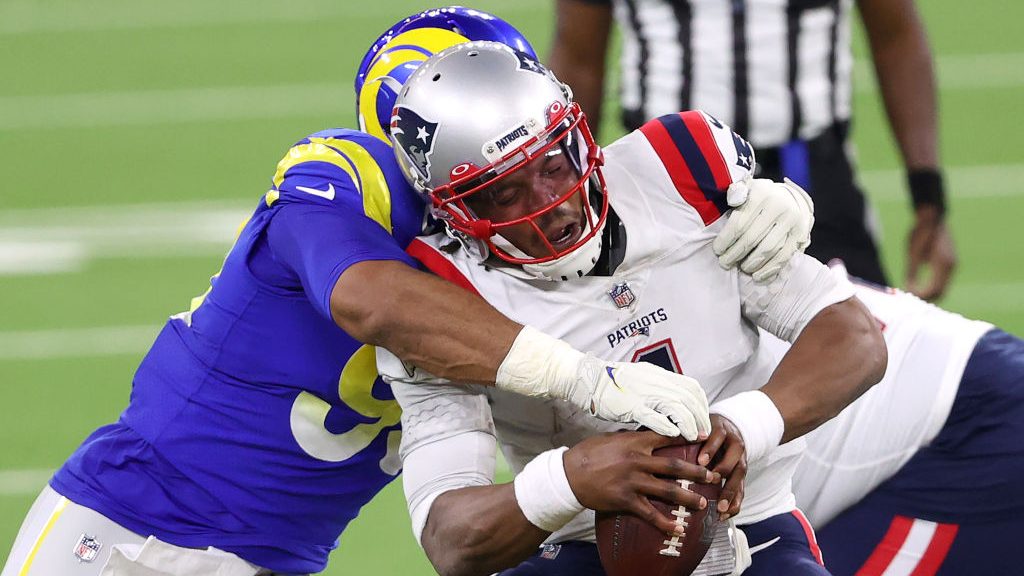 In the aftermath of a 24-3 loss to the Rams that effectively ended the Patriots’ playoff hopes on Thursday night, it’s only natural to search for someone to blame on New England’s offense.

New England’s offense, outside of Tom Brady and Julian Edelman’s hot streak in the 2018 postseason, has been trending towards below-average for three seasons now.

For three seasons, the quarterback and offensive coordinator have been trying to turn water into wine, which isn’t to say they are free of blame, but it’s only fair to acknowledge the obvious.

The Patriots have a collection of skill talent that is 21st in Pro Football Focus receiving grade this season, was 23rd in 2019, and is realistically a bottom-five group of weapons.

I had Washington and the Jags 32 and 31 before the season and they both have two weapons better than anybody on the Pats.

If you don’t believe me, ESPN’s Bill Barnwell, who ranks all 32 teams by their weapons each season, has realized that New England’s are the worst in the NFL.

Enough is enough: if the Patriots don’t make a concerted effort to improve their pass-catchers, then they’ll continue the definition of insanity, thinking they can get away with subpar talent. New England has significant issues offensively because players are in over their heads.

Then, Newton, as Brady did in 2019, is struggling to elevate a lousy group of pass-catchers that leaves too much to be desired. Two former MVPs have now had issues with the receivers that Bill Belichick and Director of Player Personnel Nick Caserio are putting on the field.

Again, nobody is excusing Newton’s mistakes or arguing that he has played well this season.

The Pats quarterback is 23rd in PFF passing grade, 29th in QBR, 26th in expected points per drop-back, and 28th in completion percentage over expected, which is not good.

With Cam, we see a downfield passer pigeon-holed into an offense that doesn’t have the weapons to be a high-volume deep passing attack or the QB to execute on short throws.

Newton struggles with the intricacies of a short passing scheme predicated on timing, decisive reads, and pinpoint accuracy that leads to yards after the catch. Brady-type stuff and the numbers bear that out as Newton is far more efficient on passes downfield.

As for McDaniels, there’s no doubt that he knows how to scheme offense. He has tried simplifying the reads, taking things from Newton’s offenses in Auburn and Carolina, trick plays, and even borrowed from Brennan Marion’s Go-Go offense in the college ranks.

But the Pats play-caller is letting the offense down in critical situations exemplified by four-straight vanilla plays on the goal line, multiple third-down calls that had no chance of success, and allowing the Rams’ dangerous defensive front to take over Thursday night’s game.

Below, we’ll take you through a heap of Newton’s drop-backs in the Rams’ loss that exemplify the issues with the Patriots’ offense.

On Newton’s first drop-back of the game, the Patriots ran their “follow” concept. The idea is for N’Keal Harry’s (in motion) wheel route to be an option against man coverage or clear-out the flat against zone coverage for Damien Harris’s swing route. The Rams are in a cover-six structure where the boundary corner is sitting on Harry’s route, and Harry doesn’t put any fear into the outside CB. Newton makes the proper read to throw to Harris, but exacerbated by the ball traveling over the Rams’ defensive line, three defenders swarm Harris in the flat.

Here’s the ensuing play where both primary options for Newton are well-short of the sticks. This season, Newton is dead-last among 33 quarterbacks in throwing past the sticks on third down.

In the play, Harry runs a middle-read route designed to give Newton a read of the safety rotation and clear-out the middle of the field coverage for Meyers’s short crosser. A four-yard shallow crosser, on third and nine, was the primary read. Newton properly works to Byrd’s six-yard in-cut with the middle of the field closed, which is out-leveraging the outside corner with no inside help. Still, the throw gives Byrd a low-percentage chance of picking up yards after the catch, and he drops it anyway when contacted by the corner; two routes that are well short of the sticks, a play that had zero chance.

Problems: play-calling, low throw with no chance of YAC

Now the Patriots break the huddle in 21-personnel with Jakobi Meyers, N’Keal Harry, rookie tight end Dalton Keene, fullback Jakob Johnson, and Harris. McDaniels calls a three-step drop with no play-action, no moving pocket, just an elementary three-step drop. Once again, Keene tries to clear-out the underneath coverage with a vertical release, creating a pocket of space for Meyers to sit down at the sticks. Predictably, the lack of creativity in Newton’s drop signals to the defense that the ball is coming out quickly, and Sebestian Joseph-Day batts the pass down at the line of scrimmage, adding to Newton’s league-lead of batted passes.

Here’s the pick-six that completely shifted the game in the Rams’ favor. As Belichick said in his Friday morning press conference, it’s hard to blame Newton for a great play by Aaron Donald. As Newton is loading up to release the ball, Donald impedes Harris from getting into his route, and Rams linebacker Kenny Young is Johnny on the spot. The only blame I’d place on Newton here is that Young said after the game that Cam has a tell on screen passes, which might just be the fact that the Patriots throw so many of them on second and long.

Problems: good play by the defense, limited scope of play-calls

This is a play that Newton would probably like back. The Rams are in an inverted cover-two structure, leaving Byrd’s deep post at the bottom of the screen open. Byrd has the leverage on the outside corner, but Newton doesn’t pull the trigger and ignores Sony Michel open on a check-down over the ball. Instead, Newton takes off running, and the unpredictability of him scrambling causes a holding call on center David Andrews. Although Byrd has a step on the out-leveraged corner, it’s not like he’s Tyreek Hill open there, which shows the types of passing windows the Patriots are expecting Newton to hit.

On Thursday night, Newton was under pressure on 43.5 percent of his drop-backs as Los Angeles’s talented defensive line got the better of New England’s offensive line.

Here, the Rams are in cover-six once again, and the Pats call a route combination to the trips side that works against that coverage. Harry runs a vertical route to clear-out the sideline, Keene releases into the flat, and Meyers is left on an option route against a linebacker out of the number three spot. Meyers creates separation from the linebacker, but David Andrews gets beat quickly in pass protection, and Newton has to scramble out of pressure.

As we mentioned earlier, McDaniels and the Patriots’ coaching staff didn’t do enough to help the offensive line in a tough matchup with Aaron Donald and the rest of LA’s pass-rushers.

On Donald’s solo sack, the Patriots left backup left tackle Jermaine Eluemunor one-on-one with the All-Pro on a seven-step drop off play-action. It’s a nice change-up by the Rams to put Donald at defensive end, but what are we doing? Doomed from the start. On top of that, the two-man route combination is a mess. Meyers’s vertical route clears out the coverage, yet Byrd breaks out into the boundary corners’ leverage instead of breaking inside where there’s space. I’m not saying Byrd has an option here. His route is probably locked, but it’s the wrong route combination against the coverage, and Donald smokes Eluemunor for a sack before Newton can do anything.

Here’s one last example of Newton struggling to get the ball out on time to an open receiver. Once again, Harry’s vertical route from the number three spot creates a pocket of space for Meyers to sit down at the sticks. Meyers is open because the corner on him needs to work through Harry, but Newton holds the ball too long and slides up into a sack.

The Patriots are asking quarterback Cam Newton to execute 15-20 passing plays per-game with below-average skill talent and often in a style of offense that doesn’t fit his skillset.

Newton could undoubtedly be better in spots, but there are systemic issues with New England’s passing attack that are years in the making.

If the Patriots want their passing game to improve, the talent around the QB must get better, or they’re putting whoever is under center or calling plays in a position to fail.

Newton, and McDaniels, are failing this season, but they are far from the biggest problems.