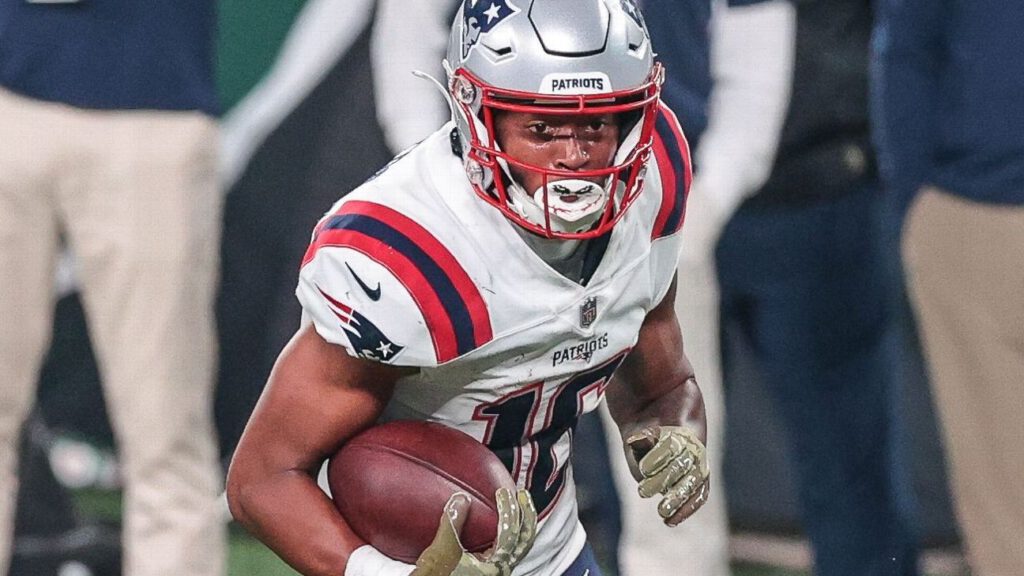 Patriots head coach Bill Belichick rarely moves practice indoors due to inclement weather, but heavy rains the Friday before New England fell to the Denver Broncos was an exception.

During the practice inside Empower Field House, Patriots quarterback Cam Newton pulled wide receiver Jakobi Meyers to the side for some veteran advice.

At that point, Meyers was the fourth wide receiver on the depth chart with only 23 offensive snaps and one catch in New England’s first four games.

“I just remember him pretty much telling me that I was selling myself short, that I have potential, all I have to do is just live up to it and go out there and show coaches what I can,” Meyers said of Newton’s pep-talk.

After Newton’s words of encouragement, the second-year wideout is flourishing for the Patriots in their last four games.

“You would think I was a prophet,” Newton said jokingly.

Meyers has 27 catches for 346 yards in New England’s last four games, including a career night against the Jets in Week 9 (12 catches, 169 yards). He’s averaging 2.99 yards per route run with a Pro Football Focus grade of 87.5, both third among wide receivers this season.

Meyers’s emergence, and Newton’s improvements, have helped maximize the Patriots’ passing offense, which has the fifth-best expected points added per drop-back since Week 8 in the NFL.

In the first seven weeks of the season, defenses got away with playing single-high coverages to load the box against New England’s rushing attack. The Pats weren’t making defenses respect their downfield passing game, so a successful trend emerged for the opponent.

Now the Newton-to-Meyers connection is making opposing defenses pay for selling out to stop the run, with Julian Edelman’s injury presenting an opportunity for the 2019 undrafted rookie.

Meyers took over Edelman’s role in the offense with the former Super Bowl MVP hampered by a knee injury and is following in Edelman’s footsteps as the Pats’ latest quarterback convert success story.

The NC State product was recruited by the Wolfpack as a quarterback but tallied 168 receptions and over 1,900 receiving yards in college after making the switch to wide receiver.

Then, Meyers had a disappointing workout at the 2019 scouting combine where he ran a 4.63-second 40-yard dash, landing in the 13th percentile, before signing with New England as an undrafted rookie. He had a massive rookie preseason and tallied 26 catches during the regular season but found himself battling for playing time in year two.

Eventually, Meyers got his chance, and in many ways, his journey resembles Edelman’s, who waited his turn behind Wes Welker. Still, it’s Edelman who, along with Newton, is mentoring Meyers.

“He [Edelman] pretty much gives me the answers to the test, honestly,” Meyers told CLNS Media. “All I have to do is watch him, what he did, and throw in my own little route technique or my own little detail. It works. He’s definitely played a big role in my time being here as a Patriot.”

The patience is paying off as Meyers is now the centerpiece of the Patriots’ passing attack, running Edelman’s favorite routes of crossers, “burst” corners, and third-down converters.

Although there are very similar elements to their games, including great footwork and route running, Meyers has more size (6-2, 203 pounds) while Edelman is far superior after the catch.

After flashing against the 49ers, Meyers became a full-time player against Buffalo in Week 8, and that’s also when it became clear he was going to produce in Edelman’s role.

Since 2018, Edelman leads the entire league in receptions and yards on crossing patterns, or over routes as the Patriots call them. Above, the Pats dial-up their patented play-action concept with Edelman crossing behind the second level of the defense, and he’s open in the second window for a big gain.

Fast-forward to this season, and here’s Meyers’s (comes in motion) version of the over route against zone coverage. New England ran an identical play-action concept, and the Pats wideout finds an opening in the second window and adjusts to a throw by Newton that’s purposely placed away from the oncoming safety. Look familiar?

Over routes will always be a Patriot staple, so offensive coordinator Josh McDaniels builds compliments to protect them and beat post-safety coverage by sending Meyers on “burst” corner routes away from the deep safety.

The receiver makes his initial release and stem look like an over route on a burst corner route. Once Edelman establishes inside positioning, he re-stems at the top of the route and breaks out on the corner pattern, beating man coverage and rendering the post-safety useless in the middle of the field.

In the audio breakdown above, the Ravens’ free safety playing the deep middle inserts himself into the box in run support, leaving the Pats wideouts one-on-one at the bottom of the screen. Meyers gets inside positioning in his release on Ravens corner Marcus Peters, re-stems his route vertically to set up his break, and twists Peters around by breaking outside.

Meyers also caught a 33-yarder on a “burst” corner route the week prior against the Jets. This time, the Pats put him alone on one side of the field in a condensed split to give him more field to run into to run his route. Besides his alignment, the pattern itself is the same, and Cam moves the deep safety with his eyes and drops it in the bucket.

Like Edelman, Meyers is also becoming Newton’s go-to target on third down. In the last three games, Meyers has five third-down conversions thanks to great awareness and separation quickness at the top of the route.

Here, Meyers runs the branch route in New England’s “branch” concept. The vertical route by the outside receiver gives Meyers space to break based of the defenders leverage. He uses a one-step stretch release at the line to get the corner leaning inside, gets outside positioning in his stem, and gains excellent ground out of his break to move the chains.

Later on, Cam went back to Meyers again for a massive third-down conversion with 3:35 remaining in the game, allowing New England to run out more of the clock. The Pats ran a spot concept where tight end Ryan Izzo’s vertical route and fullback Jakob Johnson’s release into the flat clears out a soft spot in the zone. Meyers slow-plays his route to avoid giving away his intentions and then sits down at the sticks.

“He’s such an easy target to throw to because he just finds a way to get open. Playing the quarterback position makes you intellectually sound, cerebral by default because you know what the quarterback is looking for,” Newton said of Meyers.

Another area of Meyers’s game that compares favorably to Edelman is his ability to run routes on the outside, which wasn’t as much of an option with Wes Welker or Danny Amendola-types.

Meyers and Edelman are mistakenly labeled as full-time slot receivers, but the former is running 56 percent of his routes on the boundary this season, with 17 of Meyers’s 28 catches at outside receiver.

Here, the Ravens are playing cover-three mable, where the corner at the bottom of the screen is locked into man coverage while the rest of the defense plays cover-three. The coverage call tells the corner on Meyers to use a bail technique, which means he’ll show press coverage and then drop off the line at the snap. The Pats answer is to send Meyers on a “glance” route off play-action. A glance route is a seven-step route where the receiver will push vertically and break inside on his seventh step. The play-action pulls the underneath zone-dropper out of the passing lane leaving the bailing corner in a bad spot. Meyers pushes vertically to get the corner on his heels and smoothly stops down in the proper two steps.

Meyers is also finding success by running deep dig routes where he’s finding soft spots in zone coverage. Above, Newton moves the defense by staring down the left sideline in his drop and then comes back to Meyers backside, who finds the opening in the cover-two side of the zone.

On the next play, kicker Nick Folk made a 51-yard game-winning field goal after Cam and Meyers put them in position to attempt the kick, giving New England their first win in five games.

The last piece of the puzzle for Meyers is a willingness to run block, a must in New England’s run-first offense that plays most of their snaps with only two wide receivers on the field. Meyers had a 78.0 run-blocking grade against Baltimore last week, per PFF. Oh, and he can pass too.

Meyers blossoming into a go-to target for Cam Newton is one of the season’s biggest developments for the Patriots offense.

“He’s a good route runner. He really understands coverages, timing, when to be open on the route and how to take advantage of different coverage leverages,” Patriots head coach Bill Belichick said.

“Jakobi is a smart player who’s worked hard. He’s done a good job taking the opportunities he’s had and adapting his skills as a receiver and his size in the slot at a level that he’s been pretty consistently productive over the last year and a half.”

With Edelman on injured reserve, the Pats desperately needed one of their other receivers to step up; Meyers is that guy and might be a long-term Edelman replacement.

The Pats have a knack for finding undrafted gems and a history of successfully converting quarterbacks into receivers, a position that they’ve struggled with at the top of the draft.

Meyers is making the most of the playing time he has received of late. The only question that remains is how high is his ceiling?

Both player and team are hopeful that Meyers’s recent breakout is the start of something great.