Lazar: Ten Things We Learned From the Patriots’ 27-17 Loss to the Colts 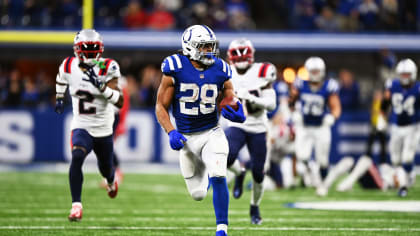 INDIANAPOLIS — One could dissect the Patriots’ 27-17 loss to the Colts on Saturday night, snapping their seven-game winning streak, in one of two ways.

On the one hand, the Patriots were due for a stinker after everything went right for two months, and the team showed its mental toughness and resilience to make it a competitive game.

But the spin for many after coming out flat and shooting themselves in the foot at Lucas Oil Stadium was that New England was exposed as a fraudulent Super Bowl contender.

The reality, as always, is somewhere in the middle. We are beyond the point of moral victories, but we also saw uncharacteristic mistakes in a string of errors that cost the Pats a victory.

A snapshot of what went wrong: a blocked punt returned for a touchdown, two interceptions (one in the red zone), jumping offside on a missed field goal turning it into three points, false start from the IND 2 on third down, 1-of-3 on fourth down, and the list goes on.

Separating the anomalies from the recurring issues is how we best gauge where the Patriots are at as a team. The Pats don’t typically kill themselves with penalties (13th-fewest coming into the week), and Mac Jones isn’t usually a quarterback that throws red-zone interceptions. In fact, Darius Leonard’s red zone pick was Mac’s first from inside the 20 this season.

Almost everything went wrong for the Patriots on Saturday night, and cleaning up most of it comes with a better week of practice, as Jones said in his post-game press conference.

The resounding sentiment from the head coach to every player who spoke after the game was the same: “this time of year, eight penalties, two turnovers, and a blocked punt is not going to get it done.”

However, outside of Hunter Henry, Jones doesn’t have a reliable target to finish drives in the end zone, and that remains a significant issue that will bury them against playoff-caliber competition.

Although we can place blame on player execution, some of the red zone woes also fall on offensive coordinator Josh McDaniels. Colts head coach Frank Reich now has two specials, the Philly and the Patriots, so where is the McDaniels special? And can we please get another fourth-and-short pass other than the sprint right/pick play?

On paper, the Patriots have more useful weapons than just Henry to finish drives. But they need their offensive coordinator to get in the lab and cook up some new recipes.

Belichick will get the rest of it sorted out, and the Pats will be a cleaner operation in future games; can they finish offensively? Ultimately, that’ll decide how far this team goes.

Here are ten things we learned as the Patriots’ drop to 9-5 on the season:

The Patriots’ offense felt the growing pains of a rookie on Saturday night, but they also saw what their young quarterback was made of mentally.

Jones had back-to-back drives end in an interception and a few situational miscues when plays weren’t materializing. The one that hurt the most was a Darius Leonard pick in the red zone, where the Pats’ rookie lost the Colts’ linebacker as he fell underneath Hunter Henry’s route after Leonard baited Mac into thinking he was blitzing.

Although the Leonard interception cost the Pats three points before the half, Jones showed excellent poise to keep grinding it out. And Mac nearly posted a positive EPA per play (-0.01) despite two picks with some excellent work in the second half, mainly in the fourth quarter.

Here, Jones looks off the coverage in his drop to hold the zone away from Kendrick Bourne’s route, then comes back to Bourne as he settles in the zone void for a 20-yard gain.

Mac slides up in the pocket to elude the rush on Hunter Henry’s first touchdown and extends the play, allowing Henry to work open for six.

Lastly, Jones had the perfect answer to an all-out blitz by the Colts defense on third down when he calmly dumped a swing pass off to Brandon Bolden in the flat, knowing that N’Keal Harry’s route would create a natural rub on Bolden’s man. Not the sexiest of downfield throws, but a heady play and a great understanding of how to beat the blitz.

Unfortunately for the Patriots, Jones and the offense weren’t able to come all the way back, but the quarterback never wavered and rebounded after one of his worst starts of the year.

Yes, it’s a silver lining or moral victory. But the building blocks continue to pile high.

2. Colts RB Jonathan Taylor Breaks the Dam and the Pats With 67-Yard Touchdown

The Pats defense held Taylor in check until the back-breaker, but MVP-caliber running backs often hit one big one that busts the game open.

On Taylor’s game-icing touchdown, New England sells out against the run, with their down under four minutes to go defense. However, Dont’a Hightower overruns his gap with Devin McCourty coming down to fill, opening the cutback lane for Taylor. With everyone near the line of scrimmage, it’s a house call once the initial wave misses.

The most sobering aspect of his MVP moment was that Taylor only gained 103 yards on his other 28 carries (3.7 average).

Belichick planned to play Indy out of big nickel with some early-down two-high coverages, conceding a defender in the box, at least initially.

Although Belichick wasn’t pleased with surrendering 225 rushing yards, the strategy nearly worked. Unfortunately, all it takes is one big run.

Special teams captain Matthew Slater and Belichick didn’t mince words when they were asked what went wrong on the punt block. Slater was at least nice enough to call it a “technique” issue while Belichick flat-out said, “we didn’t block the guy.” Although they didn’t call him out by name, Jahlani Tavai was the culprit. It could be as easy as replacing Tavai on the punt block unit seeing that he is now responsible for two of the three blocks this season, but something has to give. Leading the league in punts blocked is inexcusable.

4. “Patriots Special” is a Reminder That Frank Reich is a Thorn in Belichick’s Side

In his post-game press conference, Colts head coach Frank Reich took a subtle jab at Belichick and the Pats by calling Nyheim Hines’ first-quarter touchdown the “Patriots Special.” Reich, of course, was the offensive coordinator of the Eagles’ team that beat New England in Super Bowl 52 by scoring on a similar trick play dubbed the “Philly Special,” so let the games begin. Reich’s scheme gives the Patriots’ defensive system issues, and both coaches know it. Belichick took his time getting to the podium after the game and was his old-school self following a loss. You could tell this one irked the Pats’ head coach, and it should.

Head referee Carl Cheffers’ crew came into this week as the most flag-happy officiating crew in the NFL, and they lived up to it on Saturday night. Still, the pre-snap penalties killed the Pats, mainly a false start on Michael Onwenu on third-and-goal from the IND 2 that forced Mac and company to settle for a field goal. Earlier, special teams ace Brandon King jumped offside on a missed field goal attempt that handed the Colts three points. Then, it was a Jakobi Meyers hold, wiping out a long run by Jonnu Smith that would’ve set the Pats up again on the goal line. The penalties set the Patriots back on several occasions as they tried to claw back into the game.

6. Pats Need to do Some Soul-Searching With Isaiah Wynn

For those that have followed me all season, you know I’ve given Isaiah Wynn a very long leash. Well, it’s time to do some soul-searching. Wynn looked lost on several plays, got called for another false start, and gave up a sack.

Wynn tries to jump set against DeForest Buckner on the sack and gives up the inside. Based on his release, it looks like Brandon Bolden would’ve chipped Buckner on his way out, which makes the overset outside even more perplexing by Wynn. He had some help outside, but not inside, and still gave up the inside.

The Pats aren’t making any major changes this late in the year. However, Wynn’s future as the starting left tackle of this team is uncertain.

Another positive development for the offense was Henry’s continued emergence as a go-to target for Mac, and their chemistry is phenomenal.

We already showed the extended play touchdown, so here’s another example of the Mac-to-Henry duo having that sixth sense.

In the play, Henry runs an excellent route to stem over the top of Khari Willis before breaking off on the flag pattern, which creates a natural stack and separation. Jones releases the ball before Henry breaks with anticipation on the throw, and they gain 25 yards.

Henry made another TD grab by sitting down on the goal line in the zone void as these two seem to know exactly what each other is thinking.

One stat that should make Patriots fans smile after a tough loss is that Colts quarterback Carson Wentz had more passes broken up by Pats defenders (six) than completions (five).

Although Indy didn’t need a big game from Wentz to win, he tried his best to hand the game to New England on several occasions. Above, Wentz tries to hit a crossing Zach Pascal, but Pats linebacker Jamie Collins fell underneath the route to tip the ball into Devin McCourty’s lap.

Top cornerback J.C. Jackson led the way with three pass breakups and was close to an interception on a boot-action crosser, but Colts wideout Michael Pittman turned into a defender to break up the throw.

The Patriots coverage players got their hands on the ball all night, and Wentz is lucky that he only threw one interception.

The moment we’ve all been waiting for: N’Keal Harry going up and Moss’ing a defensive back in a big moment. Although the comeback wasn’t made complete, Harry’s 43-yard contested grab was precisely the type of play we’ve been clamoring for from the 2019 first-round pick.

Harry gets single coverage downfield, Jones gives him a chance to make a play, and he delivered by going above Isaiah Rodgers to haul in the bomb to set up another Henry touchdown that would make it 20-17.

With Nelson Agholor likely landing in concussion protocol, Harry might have a large role next week against Buffalo. Let’s see what he makes of it.

10. Hat and T-Shirt Game: Pats Can Clinch AFC East With Win Over Bills Next Week

Despite a difficult loss to the Colts, the Patriots are in a position to clinch the AFC East crown with a win over the Bills next week at Gillette Stadium. Although there will be some carryover, one would expect a much different game this time around than we got in Week 13.