Lazar: Ten Things We Learned From the Patriots’ 36-13 Win Over the Titans

The Patriots rout the Titans but there's plenty to work on. 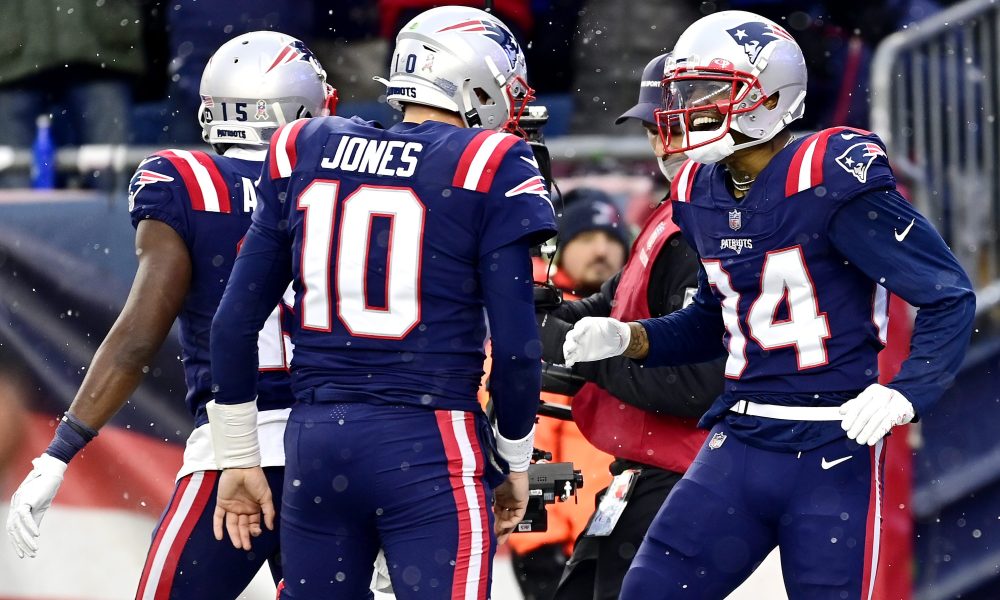 FOXBOROUGH, MA — The Patriots continue to roll with their sixth-straight victory over the Tennessee Titans at Gillette Stadium on Sunday.

Although it was closer than the 36-13 score indicates, Bill Belichick’s team rattled off 20 unanswered points in the second half to turn this one into a rout over an injury-riddled Titans team.

On the one hand, New England’s defense settled down and forced four turnovers while quarterback Mac Jones impressed again in his second career 300-yard passing performance.

But a subdued Belichick stood at the podium after the game with a clear message to his team: “We missed some opportunities in the game… Certainly, some things we could have done better.”

At the top of Belichick’s to-do list is fixing a run defense that surrendered 270 rushing yards to the Titans sans All-Pro running back Derrick Henry. Tennessee averaged 6.9 yards per rush, had two 100-yard rushers, and added 0.09 expected points on their 39 carries (92nd percentile).

Offensively, New England drove the ball inside the Tennessee 41-yard line nine times but kicked six field goals, including a two-of-five showing in the red zone for Mac Jones and company.

The Pats’ win harkens back to the dynasty days, where a blowout over a banged-up opponent isn’t good enough because we know what championship-caliber looks like, and that’s a good feeling to have those first-world problems again.

In these last stages of the season, the Patriots will take wins any way they can get them as they try to keep pace in both the division race and the overall standings in the AFC playoff hunt.

Still, Belichick was the first to tell his team that they have work to do in a few key areas.

Here are ten things we learned as the Patriots improved to 8-4 on the season:

1. Although it Wasn’t Perfect, Pats QB Mac Jones Was Dealing vs. Titans

Patriots rookie Mac Jones was cooking against a Tennesee defense that was mostly whole in terms of injuries on that side of the ball.

The narratives will suggest that Jones was only so-so because he overthrew Hunter Henry on an open touchdown attempt and the Pats offense stalled several times in the red zone.

Although there were some negative plays, Jones added 0.38 expected points per drop-back with a completion percentage over expected (CPOE) of +8.3 in the win. A very, very good day at the office for the Pats’ rookie.

Here, the Patriots use a “nub” set with Hunter Henry as the furthest receiver out to the left side, and his crossing route gets safety Kevin Byard to jump Henry underneath. Meyers mentioned after the game that his job on the play was to clear out space, but when Mac saw Byard vacate the deep middle, Jones let it go deep to Meyers.

The Pats’ rookie was also impressive off play-action against the Titans, completing all 11 of his play-action throws for 169 passing yards (15.4 average).

In this play, New England calls “Charles Barkley,” with the backside guard pulling to simulate a power run and a motion into the flat by Kendrick Bourne. The motion combined with the play-fake gets the second-level spinning for the Titans, and Mac puts the perfect amount of touch on the ball to get it over the linebacker to Jonnu Smith on the crosser.

If there’s one area of Jones’s game that needs to improve, it’s against the blitz, where he’s struggling to find post-snap answers against pressure.

The Titans dialed up a similar zone blitz to a call by the Falcons last week that got to Jones. This time, Tennessee overloads the right side, forcing the pressure to adjust with the back (Bolden) opening in that direction to help pick up the overload. Then, Byard blitzes up the middle, and there’s nobody to block him. In that instance, it’s unlikely that pass protection is responsible for picking up the blitz, given that it’s from the deep in the secondary. It’s on Jones to get the ball out, and it appears that Hunter Henry is open over the middle.

Even if there are always things to clean up, the Patriots will win a lot of games with the level of QB play that Jones gave them on Sunday.

There were several issues with the Patriots’ run defense: defensive linemen failing to occupy blocks to keep the second-level clean, fits from the second level missing, and poor tackling technique and angles.

On Dontrell Hilliard’s 68-yard touchdown before the half, put this one on poor situational awareness and coaching. The Pats are in a pass-rushing front with only one defensive lineman (Barmore) on third-and-three. They looked totally unprepared for a run play both before and after the snap.

New England’s run fits are predicated on the first level keeping the linebackers clean to make plays while those big LBs need to get off blocks. On Sunday, none of that was happening.

When the Patriots signed Bourne in the offseason, he was touted by 49ers brass as a reliable possession receiver who ran challenging routes out of the slot and wasn’t afraid of contact.

Although those things are still valid, Bourne adding contested-catch and YAC skills to his game this season is a pleasant surprise.

Kendrick Bourne now ranks 4th in the NFL in YAC over expected this season (+126), which measures how many more yards a receiver gains after the catch relative the location, direction, and speed of every player on the field.

This season, Bourne ranks fourth among all receivers in YAC over expected.

Plus, he is making contested grabs at a high rate as well (8-of-9), adding another contested catch to his leger by elevating over Titans safety Kevin Byard to snag a four-yard touchdown pass from Mac Jones. The Pats run a mirrored “smash” concept where Mac can throw the under-corner combination to either side. He picks Bourne because he draws the safety matchup and puts it on a platter for the Pats wideout.

In the Patriots’ first 12 games, Bourne leads the team by averaging 14.8 yards per catch.

Meyers delivered with a team-high five catches for 98 yards, and he also did some little things that don’t show up on the box score.

On the 38-yarder, Meyers showed excellent concentration and awareness (he wasn’t the first read) to make the catch despite Byard flying across his face right before the ball arrived, which is extremely difficult to do.

The Pats hit Meyers for another explosive play on their “sail” design by flooding the sideline zone coverage. Agholor’s vertical route and Bourne’s flat motion open up a hole for Meyers, who finds it and settles in the zone.

Lastly, Meyers made a key block on Kendrick Bourne’s second touchdown by getting in the way of the Titans defender to help Bourne turn the corner but making sure it’s legal by not blocking back with force towards his own end zone.

Meyers continues to do many big and little things well as a key cog in the Patriots’ offense.

5. Pats Defense Makes a Goal-Line Stand to Ice It Late

With the Titans trying to make it a one-score game in the fourth quarter, the Patriots defense put the game on ice with a goal-line stand ending with J.C. Jackson’s seventh interception.

The key plays came on third and fourth down. First, Kyle Van Noy and Adrian Phillips exchange receivers perfectly on the switch release, and KVN breaks up the pass in the end zone.

Then, the Pats defend a boot-action design with Phillips picking up the “slide” route into the flat, Jalen Mills dropping with the corner route, and Devin McCourty inserting in the crosser window. With McCourty sitting in the passing lane, Ryan Tannehill forces the pass in there on fourth down, and McCourty tips it to Jackson.

The Pats defense may have struggled in certain areas on Sunday, but they shut out the Titans in the second half thanks to three takeaways.

Patriots kicker Nick Folk continues an excellent 2021 season with five made goals, including a 52-yarder into the stadium’s open end that tied Stephen Gostkowski for a franchise-record (most 50-plus yard field goals in a season – six). Folk is one of the best players on the roster. Certainly, he is one of the most consistent players on the team.

The amount of takeaways created by Jackson is absurd, and he did it twice more on Sunday with the end-zone interception on fourth down and a terrific hustle play to force a fumble.

On the strip-fumble, Jackson is on the backside of the play and chases down D’Onta Foreman in the open field to make the Titans running back pay for carrying the ball in his inside hand. Jackson punches it out, and Jalen Mills is there to recover the fumble for the Pats defense.

Jackson (7) is now one interception behind the Cowboys’ Trevon Diggs (8) for the league-lead, has a league-high 16 passes defended, and added a forced fumble to his stat sheet on Sunday.

Add another “hit” to Belichick’s most recent draft class with rookie Rhamondre Stevenson. Although Damien Harris runs hard as well, and they continue to split carries (11 to 9), Stevenson is a more dynamic back.

The Patriots run a crack toss where Stevenson gets some good initial blocks from fullback Jakob Johnson and left guard Ted Karras to get rolling. But Stevenson takes over from there by avoiding five tackle attempts by the Titans defense to rattle off a game-high 19-yard run.

Having two productive running backs when the blocking holds up is great for the Patriots.

If Jones hits Henry on the wide-open touchdown, we are talking about nearly 100 yards combined and a touchdown. Henry beat Amani Hooker with a smooth post-corner route by stemming into the defenders’ leverage and snapping off the corner route. Mac makes the correct read but just overthrew it.

As for Smith was a problem all afternoon for the Titans defense off play-action by running crossing routes behind the linebackers after the play fake.

Henry and Smith did their part with the Patriots’ offense spreading the ball around.

As we wrote about in our Pats game plan on Friday, running into the teeth of the Titans’ defense is a challenge. The Patriots stuck with their recent offensive line of choice with Ted Karras (left guard) in the starting lineup over second-year standout Mike Onwenu. Although the final numbers look good (23 carries, 106 yards), this wasn’t a very good performance on the ground. Those yards mostly came late in the fourth quarter when the Titans were on the ropes, and the Pats only had a 35% success rate on their 23 rush attempts. On initial viewing, the left side of the line had issues with Isaiah Wynn (LT) and Karras struggling at the point of attack. McDaniels could’ve helped the O-Line out with more outside runs and jet sweeps.