Lazar: Why the Patriots Opted for QB Mac Jones Over Trading Up for Justin Fields 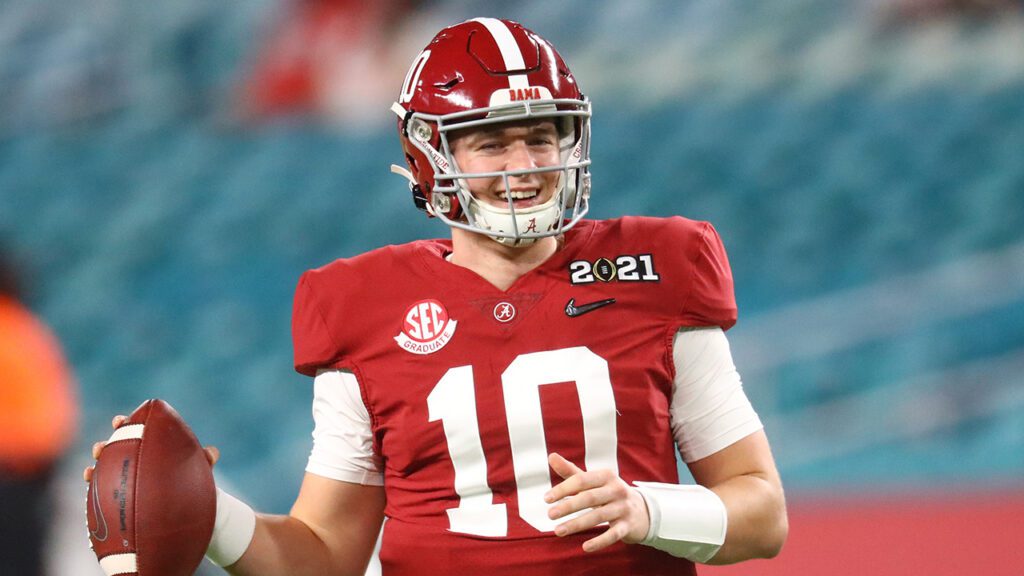 The connection between the Patriots and new quarterback Mac Jones was evident long before New England selected him in the first round on Thursday night, yet it was hardly discussed in the lead-up to the draft.

Former Patriots offensive coordinator Charlie Weis said that Jones was the best fit for his former boss, Bill Belichick, all the way back in February. Then, Jones himself said he wanted to be in New England all along.

“What are the two most important components of a star quarterback? They have the “it” factor, and they’re accurate. That’s who he was,” Weis said in an interview on SiriusXM NFL Radio.

Along with Weis and Jones’s preferences, the Pats’ top pick also won a National Championship under one of Bill Belichick’s closest friends in the sport, Alabama head coach Nick Saban.

“Coach Saban’s always very helpful in his evaluations. So we have always had great conversations about his experiences with the players,” Belichick told CLNS Media of Saban’s role in selecting Jones.

Despite all the dots connecting the former Saban protege to Belichick and the Pats, it felt like the San Francisco 49ers were locked into Jones with the third overall pick, taking him off the board for New England. In hindsight, it seems that the Niners and Pats were working in cahoots, with the 49ers using Jones as a smokescreen for Trey Lance, while word spread that the Pats were zeroed in on Justin Fields. In the end, both San Fran and the Pats got their guys.

With Fields going four picks earlier to the Bears in a trade-up, the natural inclination will be to compare Jones’s career with the Patriots to Fields; did the Patriots draft the right quarterback?

Yes, New England would’ve needed to outbid Chicago for the 11th pick to select Fields, but still, we know the nuances will be lost, and the two will now be linked forever.

To be clear, I’m not here to tell you that Mac Jones is a better pro prospect than Justin Fields because that would be inconsistent. I had Fields as QB2 in the draft and Jones as QB5.

According to most draft pundits and my evaluations of the prospects, Fields is a superior talent with better arm strength, mobility, and playmaking ability at the quarterback position.

But what I would like to do is explain what the Patriots saw in Jones to make a first-round commitment as their quarterback of the future.

As Weis said, Jones is deadly accurate, with a completion percentage over expected of plus-16.8 and 82.6 catchable pass rate were second in the nation during the 2020 season.

The former Alabama quarterback also routinely does the little things such as making quick decisions and reads, manipulating defense, moving in the pocket, and throwing with touch, timing, and sound ball placement. With Jones, it’s the details that stand out, not the tools.

In this first example, Alabama has an outside glance route (seven-step slant) paired with an inside wheel route and flat route. Jones’s first move in the pocket is to pump-fake to the two receivers heading towards the flats, which gets the slot corner to jump the underneath routes. He then transitions his feet and shoulders upfield to stare down the glance route, which holds the safety on that side of the field from rotating over the wheel route. By putting DeVonta Smith in an advantageous situation, Smith easily blows by the slot defender, and it’s six.

Here’s an instance where Jones makes a leverage throw against a green dog blitz that causes a muddy pocket. A green dog blitz is when an eligible receiver stays in to block, so the defender assigned to him in man coverage blitzes. In this case, tight end Miller Foristall motions into the formation and tips off Jones to man coverage, then stays in to block. When the Georgia defense passes off Foristall, Jones knows that the inside route by Jaylen Waddle will occupy the deep safety, leaving the outside receiver open on the dig route. Jones stands in against pressure and makes a strong throw to the open receiver.

Another element of Jones’s game that stands out is his awareness to protect receivers from oncoming defenders with this ball placement. This time, Foristall is going to come across the field on an over route. Alabama uses two deep routes from the left side of the formation to clear out the coverage, but the corner in the right boundary falls off the vertical route to play the flat. Jones anticipates that fall off and makes sure to throw Foristall open away from the hit.

The new Patriots QB made several anticipatory throws by quickly processing the coverage.

This time, the defense passes off the pre-snap motion indicating its zone coverage. Alabama has a vertical route at the bottom of the screen to clear out the boundary corner, leaving an out-breaking route from the inside receiver against an out-leveraged defender. As soon as the outside corner carries the vertical pattern, Jones knows his inside receiver will be open, and he starts his throwing motion before his receiver is out of the break.

Jones draws comparisons to great pocket passers of the past and present due to his pocket movement and awareness, which always stands out with Tom Brady.

Here, Jones likely knew the entire time that he had the second in-breaking route over the middle after Jaylen Waddle’s crosser cleared out the underneath coverage. However, the pocket is collapsing on the edges, so Jones makes a quick move to slide up in the pocket to make the throw. Once again, he delivers a ball to protect the receiver away from the oncoming defender.

Lastly, I do want to say that, although Jones’s arm talent isn’t on-par with the four quarterbacks selected ahead of him, he doesn’t have a weak arm. The throws above are darts on a line, while the next one is a deep ball with plenty of arm strength.

In this play, Jones sees the deep safety to his right jump Jaylen Waddle’s route, leaving DeVonta Smith one-on-one on a go route, and Jones delivers a beauty.

The tropes you’ll hear about the Patriots’ selection of quarterback Mac Jones over the coming weeks, months, and years is that he doesn’t have the physical tools to elevate an offense.

Jones doesn’t have the arm talent or mobility to create on second reactions when the initial play call fails, so he’s not like most of the top quarterbacks in today’s game (think Mahomes, Rodgers, Wilson).

Although there’s some truth to that, the point remains that the Patriots drafted Mac Jones, tabbing him as their future starter, because they saw a detail-oriented pocket passer.

A player that understands how to read and react to coverage, get the ball out on time, and put the ball in the right places to make life as easy as possible on those around him.

As the rest of the NFL chases athletic quarterbacks, the Patriots are sticking to what they know, drafting a quarterback whose much closer in style to Tom Brady than Patrick Mahomes.

WHAT IS NEXT FOR THE PATS IN THE DRAFT?

The next steps for New England’s offense with Jones eventually taking over as the starting quarterback is continuing to surround him with a supporting cast that fits his playing style.

In the examples above, Jones made several good plays to the middle of the field, so you know tight ends Hunter Henry and Jonnu Smith can thrive off various in-breaking patterns.

Free-agent addition Nelson Agholor gives Jones a vertical threat, while newcomer Kendrick Bourne can work things open at the top of the route and between the numbers as well.

However, the one hole that remains is a player in the DeVonta Smith or Jaylen Waddle mold that will thrive as a ball carrier on schemed plays or after the catch where Jones throws the ball quickly into space.

Luckily, those exist in droves on days two and three of the draft, with Ole Miss’s Elijah Moore, Clemson’s Amari Rodgers, and Purdue’s Rondale Moore at the top of our wish list.

Next, the focus turns to protecting Jones since he isn’t an elite runner that will escape pressure and extend plays with his legs. The Pats could have holes at both tackle spots following the 2021 season, with starters Isaiah Wynn and Trent Brown set to be free agents.

Once again, the Pats are in luck, as this is a deep offensive tackle class with plenty of talent still on the board, such as Notre Dame’s Liam Eichenberg, Oklahoma State’s Teven Jenkins, or North Dakota State’s Dillon Radunz.