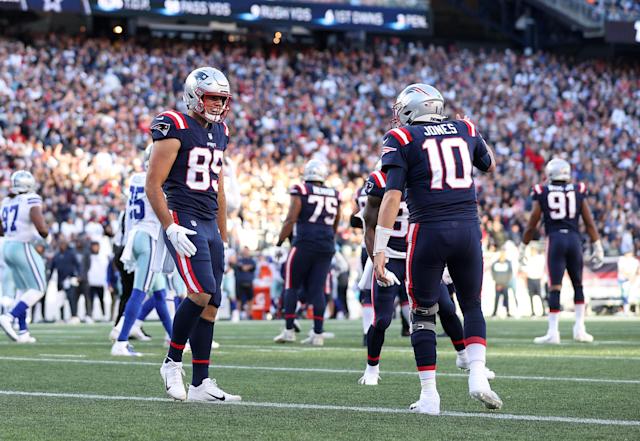 Days after the Patriots’ heartbreaking overtime loss to the Cowboys, the sting is hopefully wearing off enough for us to take an objective look at New England’s offense.

My film review left a more optimistic feeling for the Pats offensively than it did on defense. The defense feels like it is what it is. Players are mostly performing to their talent level, everyone has a role, and they’re a league-average unit that will hopefully make some marginal improvements.

Since Stephon Gilmore isn’t walking through that door, it is what it is with the Patriots defense.

Offensively, on the other hand, the Patriots are improving and put together their best tape of the season against a solid Cowboys defense. New England scored 29 points, had a season-high six explosive plays, ran the ball well, and is figuring out creative ways to use their skill players.

The two middle quarters were plagued by drive-killing miscues:

As much as those drive-killers separate the mediocre offenses from the good offenses, they might be onto something here if the Patriots can clean a few things up.

Starting with the run game, this was the most diversified rush plan the Pats featured in 2021 with a much-needed infusion of motion and bigger personnel to open up holes for the backs.

After struggling with stagnant blocks, offensive coordinator Josh McDaniels also got fullback Jakob Johnson and the tight ends moving into their engagements more this week.

The Pats hit on explosive runs off of fullback wham, inside zone on the wildcat TD, one-back power with motion to pull the linebackers out of their gaps, one-back counter with the same motion, one-back counter from the shotgun, and FB lead counter (shown above).

In an even more important development, rookie quarterback Mac Jones looks more and more every week like he’ll be a part of the Patriots’ future success rather than a hindrance.

Sucks to see it happen in a losing effort but this was the best game of Mac Jones's NFL career to date: 92.7 @PFF passing grade, 10.9 YPA, +9.9 CPOE, three big-time throws, 4-for-4 on deep throws, 110.4 rating under pressure. Really strong performance by Mac. #Patriots

Jones had his best performance yet with season-highs in deep completions (4-for-4), yards per attempt (10.9), and a continuously solid showing in completion percentage over expected (+9.9).

Plus, Mac is finally getting some help from offensive coordinator Josh McDaniels’s play-calling to get receivers open downfield for big-play opportunities. Let’s get to the tape:

This is probably the best play design we’ve seen from McDaniels all season. Since the Pats are in 12-personnel, Dallas’s defense matches it with a single-high safety structure. 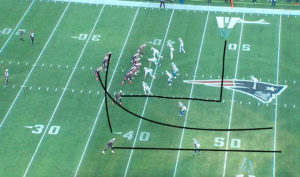 New England floods Dallas’s cover-three zone by creating three vertical stems on the right side of the formation. Meyers’s inside route from the number three spot holds the deep safety and Agholor’s vertical route on the boundary clears out the deep-third CB, opening the seam for Stevenson.

As we roll the play, the Pats use a play-action fake to tight end Jonnu Smith working out of the backfield, creating more chaos for the linebacker level. As the Dallas linebackers drop to their zone responsibilities, Micah Parsons is rallying to his flat assignment when he sees Stevenson running up the seam. Parsons is too late to match the seam, and Jones hits Stevenson for a chunk gain. Even if Parsons can carry Stevenson’s vertical route, the Pats might get a 20-plus yard play on a catch-and-run by Smith underneath. Just a great design by McDaniels.

Later in the drive, the Pats go back to 12-personnel to get Dallas in single-high once again.

McDaniels calls play-action with four vertical routes to stress the post-safety in the middle of the field. With two seam runners in Hunter Henry and Smith, the deep safety can’t help over the top of both tight ends. Jones reads the deep safety starting on the right hash, stares down the right side to hold the safety in the middle of the field, and essentially no-looks it to Henry by trusting his tight end to win the matchup on Dallas DB Malik Hooker, which Henry does, and it’s six.

Although the drive didn’t end well, Jones had the Patriots’ offense moving again on their third series thanks to a 27-yard connection with Nelson Agholor on a “burst” corner route.

Dallas played nearly 75% of their snaps in cover-one man against New England, and Jones beat man coverage on several occasions.

This time, he has Agholor working the “burst” corner against single-high. Agholor stems inside like he’s going to run a crosser, gets the CB to commit his hips in that direction, and then breaks outside on the seven route. The Cowboys run a stunt blitz that nearly gets home, but Jones knows the post safety won’t be a factor and gets enough on it to drop it in the bucket to Agholor. 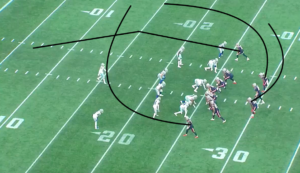 Still, the play was a great design and process by Jones that McDaniels will surely dial-up again. Like the Stevenson catch, the Pats run another variation of their “follow” concept out of a two-back formation. This time, Brandon Bolden releases up the sideline, and Stevenson follows him into the flat while Meyers runs an in-breaker, and Agholor occupies the post safety.

As we roll the play, the Cowboys are in man coverage, and the defenders on the two backs follow Jones’s eyes to their releases on the right sideline. Once he sees linebacker Leighton Vander Esch vacate the middle of the field, Jones knows he has Meyers working the crosser against an out-leveraged corner. Mac escorts Vander Esch to the flat with his eyes and resets in the pocket to hit Meyers in-stride for what should’ve been a touchdown. Pretty play.

The Pats offense needs to improve on third down as a whole, but Mac converted two key third downs in the fourth quarter.

Here, New England ran a double dig combination with the two receivers to Jones’s right. Mac knows he has the tight end (Henry) and back (Bolden) flaring into the flats to open the passing lane against man coverage. He makes sure the man coverage defender on Bolden gets there by staring down the left sideline in his drop, then comes back to Meyers to move the chains.

We had Jones down with two negative throws, one incompletion to Meyers on a third-down slant, and the pick-six that was catchable for Bourne but a little too high over the middle (throwing high on slants is something worth monitoring moving forward with Mac. It happened quite a bit already but it’s only burned him on the Diggs INT).

Still, Jones’s 75-yard touchdown strike to Kendrick Bourne had gutsy written all over it. To rebound from the pick-six by beating Diggs for six on the very next play? Huge cajones.

In the play, Bourne runs an out-and-up on the bottom of the screen against Diggs. The Cowboys start in a two-high shell and rotate into single-high. Jones sees the post safety help coming from the far hash, and Bourne beats Diggs on the double move. We are willing to give Jones the benefit of the doubt here. The coaching point is to throw this ball into the sideline to lead Bourne away from the deep safety. Instead, Jones ends up throwing the ball inside the safety, and it works out perfectly. By throwing it inside the safety, it throws off the post safety’s angle to the ball (he’s thinking get outside the numbers), and Bourne cuts across him to house it.

Although some film nerds like myself would say Jones got lucky that the post safety took a bad angle, it’s a laser by Mac that we are willing to bet he threw inside on purpose.

Lastly, Jones was good under pressure all game long and made another impressive downfield throw in overtime with the pocket collapsing.

With Dallas in cover-one again, Jones makes a leverage throw to Meyers, knowing he has positioning on the in-breaker with the deep safety over the top. Mac gets enough zip on the ball without setting his feet despite multiple defenders closing on him in the pocket.

The only thing holding the Patriots’ offense back at this point is shoring up a still-shaky offensive line and the least aggressive decision-makers in the NFL punting/kicking every chance they get.

We’ll have more on Bill Belichick developing into the most conservative head coach in football later this week. But know this: the Pats offense is starting to click.

If the Patriots continue to execute as they did against the Cowboys on Sunday, Mac Jones and the offense will give them a chance to pull out of a 2-4 hole.