Lazar’s Mock Draft 2.0: Changes at the Top for the Patriots 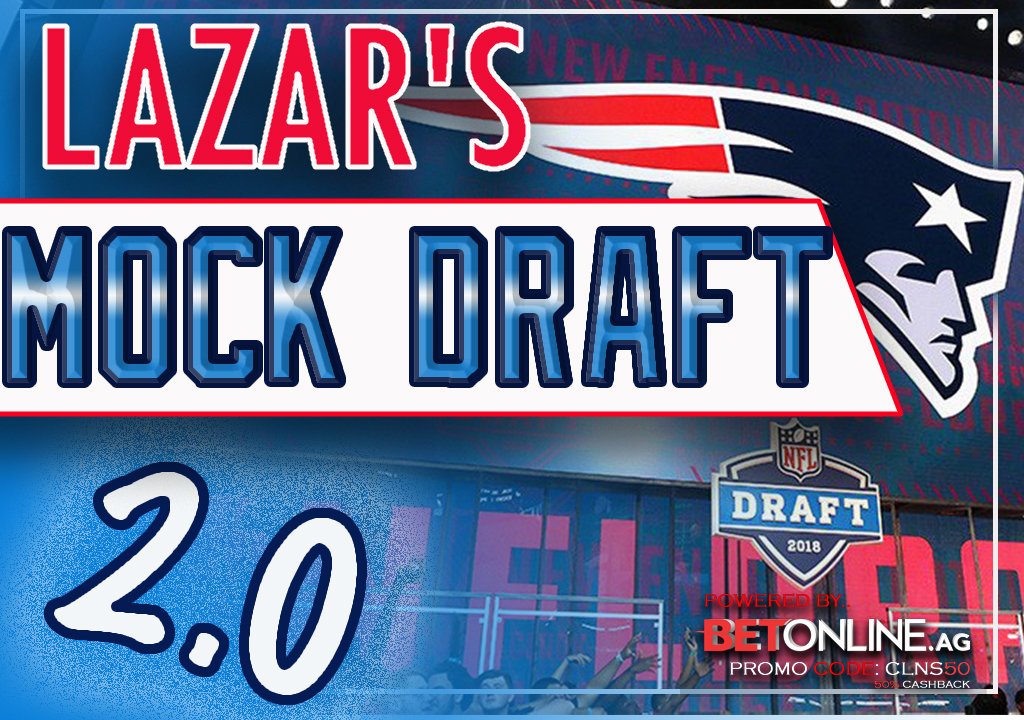 Patriots head coach Bill Belichick always says that New England doesn’t draft based on need opting to select the best player available on their board rather than filling a hole on the roster.

However, two weeks before the draft, the Pats have holes on a roster that’s now without Rob Gronkowski and in need of wide receiver, defensive line and offensive tackle help.

There’s still the possibility of a trade and a few remaining free agents that are possibilities for New England, but their best bet for retooling their roster is through the draft.

With that in mind, here’s a second stab at a seven-round mock draft for the Patriots:

As we get closer to the draft, Lawrence is the most likely target for the Patriots at the end of the first round. Jerry Tillery and Clelin Ferrell have more pass-rushing upside, which makes me think they’ll be off the board by the time the Patriots are on the clock, leaving a perfect fit in Lawrence for them. The Clemson product would be the most physically imposing player on the Patriots’ defensive line since Vince Wilfork. He has some Wilfork potential as an intimidating run defender that wins with overwhelming power and rare lateral agility for a 340-pound defensive tackle. The Patriots morph from a 3-4 to a 4-3 team based on their opponent, but they still use an old-school nose tackle in both odd and even fronts. Lawrence is a perfect scheme fit that is a plug-and-play starter on New England’s defensive line.

My instincts tell me that the Patriots will look for a wide receiver and tight end with their two picks in the second round, so we start with a wide receiver. My instincts also tell me that South Carolina’s Deebo Samuel and Ole Miss wideout A.J. Brown will be off the board. The Patriots could get aggressive and trade up, but in this mock, they “settle” for the polished big-man in Arcega-Whiteside. The Stanford star solidified his spot in the second round with a 4.49-second 40-yard dash at his Pro Day, which eliminated any concerns about his long speed at 6-2, 225 pounds. Arcega-Whiteside has arguably the best release package in this class making defenders look foolish at the line of scrimmage with a series of fakes that work in concert with savvy footwork to shake defensive backs. He also knows how to use his big frame to box out smaller defenders both on horizontal breaks and on jump balls down the field, which led to 18 red zone touchdowns over the last two seasons.

We are sticking with Sternberger at tight end for the Patriots. Irv Smith, Jr. is tempting at the end of the first round, but Sternberger offers more receiving upside than the Alabama product. Sternberger is a field stretcher, especially up the seam, with 21 catches of 20 or more yards in 2018. He also averaged over eight yards after the catch per reception showing natural vision to go along with a 250-pound frame that makes him difficult to bring down in the open field. Sternberger will have to develop as a blocker, but he has as much receiving potential as any tight end in this class.

The first pick in this mock that isn’t at a position of need. Long is a perfect fit for New England as a press-man corner whose sticky coverage is eerily reminiscent of Malcolm Butler and JC Jackson. Long checks almost every box for the Patriots at the position, including a combine-best 6.45-second three-cone time, which we know is important to New England. A top three of Long, Jackson and Stephon Gilmore for the next three years was too good to pass up at this point of the draft.

It would not surprise me if the NFL is higher on Nelson than draft media, but for now, he’s slotting in at the end of the third round. The Patriots would love to snag Nelson here who checks most of their boxes for a defensive end prospect. He has length (6-7, 35-inch wingspan), lateral quickness (6.95-second three-cone) and plays with terrific technique. Despite his height, Nelson has the knee bend to keep his pads low playing with proper leverage and arm extension in the running game. He’s got heavy hands that he knows how to use, and has developed a go-to arm over move as a pass rusher. Based on his athletic profile, Nelson is a 76 percent match for former Patriots defensive end Chandler Jones, but he plays with a never-ending motor that was always a question mark with Jones.

Another holdover from my first mock, Scharping’s high-IQ and experience as a four-year at Northern Illinois make sense for the Patriots. In the last three seasons, Scharping only allowed one sack to Iowa’s A.J. Epenesa who will be a top edge rusher in next years draft. Scharping has adequate foot speed to mirror rushers and understands how to play to his strengths masking his weaknesses. He also knows his role within the scheme on every play and studies up on his opponent coming into every matchup with a game plan. Scharping could potentially start at either tackle spot down the road, but for now, he’d be a perfect swing tackle for the Patriots.

The most significant change in mock 2.0 is that the Patriots do select a quarterback, Boise State’s Brett Rypien. Rypien has some physical limitations, but he gets through his progressions as fast as any quarterback in this class and makes some terrific downfield throws under pressure. Rypien throws with accuracy to all three levels and has experience both under center and in the shotgun. There are not very many quarterbacks in college these days that run play-action from under center, which we know is a staple of the Pats offense with Brady. Rypien stands at a shade under 6-2 and only weighs 210 pounds, but his mental processing, throwing mechanics and downfield accuracy are starting-caliber traits.

Hampton moves up around after a strong showing at his Pro Day. The Rutgers safety was a team leader and captain for the Scarlet Knights playing both free safety and a hybrid role on defense and was a core special teamer. Hampton reminds me of a young Duron Harmon projecting as a free safety at the next level. He’ll need to anticipate and play with more urgency as a center fielder, but he’s got a lot of the same tools as players projected to go much higher than him in the draft. My only hope is that the Patriots don’t reach on Hampton on day two.

Pipkins will probably go higher than this, but he’s a late-round tackle prospect that the Patriots could target. He’s got the build and athleticism of a starting left tackle, testing in the 79th percentile, and his pass sets are NFL caliber. He sets with good balance, knee bend and has the foot quickness to mirror edge rushers. There are some technique issues, and he doesn’t have much experience setting for traditional dropbacks, but he’s a nice project for Dante Scarnecchia.

Easley feels like another example of the Patriots passing on more heralded prospects such as Andy Isabella and Hunter Renfrow for a player that isn’t that far off from them that can be had much later in the draft. Easley got on my radar with a 6.55-second three-cone at the Iowa Pro Day, and that quickness translates on tape. He’s lightning quick out of his breaks and ran a route tree that’s very similar to what the Patriots ask of their slot receivers. He’ll push Braxton Berrios and Bruce Ellington for a roster spot.

Pollard is a do-it-all weapon that doesn’t necessarily have blazing speed but has a knack for big plays. At Memphis, he was standout on kick returns tying an FBS record with seven career touchdowns and played both running back and wide receiver on offense. The Patriots need a new kick returner with the departure of Cordarrelle Patterson, and Pollard is the best that college football has to offer in that role.

Trevon Wesco from West Virginia is my guy, but my guess is the NFL will like him too. The Patriots wait for Conrad who has similar versatility to Wesco as a blocker and ranked fifth in yards per route run in the tight end class. He’s got a nice feel for finding soft spots against zone coverage as well. Conrad isn’t very dynamic as a route runner, but he’s a sound blocker and knows how to get open within the scheme.