Could Bill Belichick call offensive plays for the Patriots this season? 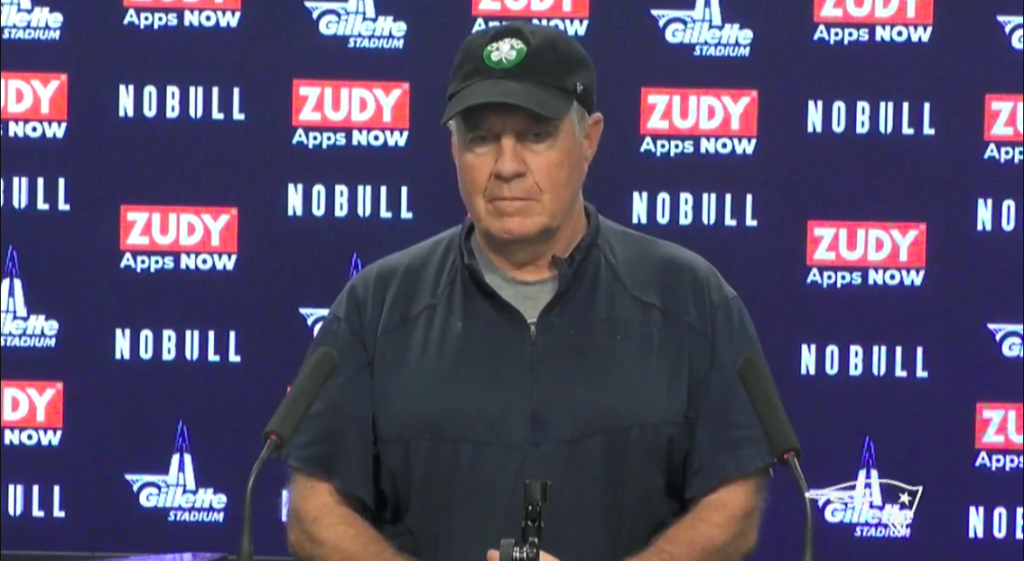 FOXBORO, MA – The Patriots began organized team activities with an impressive turnout for their first practice open to the media this spring in a one-hour, 40-minute session on Monday at Gillette Stadium.

After reports that New England’s veteran leaders were impressed with the team’s work ethic in the voluntary portion of the offseason, the Patriots had just 13 absences among 85 rostered players. Key figures such as quarterback Mac Jones, nearly his full complement of receivers, and several defensive veterans were in attendance for Monday’s session.

Good attendance for the #Patriots on day one of open OTAs. Not spotted:

Although it’s important to remember these workouts are voluntary, Harry hasn’t reported to Foxboro yet this offseason amid trade speculation, and Wynn is sitting out workouts yet again. Last season, Wynn also sat out the voluntary portion of the offseason program and got off to a slow start.

Along with taking in practice, reporters also spoke to head coach Bill Belichick before practice on Monday.

As one would expect, Belichick downplayed the importance of naming an offensive play-caller, saying, “the execution of the plays is more important than the plays themselves.”

The Pats head coach also declined to answer when he would name an offensive play-caller after long-time offensive coordinator Josh McDaniels’s departure, noting that New England is, “months away [from calling plays]. Months.”

Before we get into today’s notes, it’s important to caveat all observations by saying this was a non-padded practice where teaching is more important than evaluating the roster.

Here are nine observations from day one of the Patriots’ organized team activities on Monday:

After deflecting questions about the offensive coaching staff before practice, an early 7-on-7 period saw head coach Bill Belichick insert himself into the offensive huddle and bark out orders. Belichick was calling offensive plays at times during team periods, while de facto QB coach Joe Judge worked closely with Mac Jones, and Matt Patricia was subbing in personnel groupings. As Belichick noted, it’s way too early for any final decisions on offensive play-caller responsibilities, but it certainly appears that Belichick will be heavily involved.

After a sharp practice session, starting quarterback Mac Jones spoke to reporters on Monday. Jones, whose teammates jokingly said lost, “his stomach,” this offseason, mentioned trimming body fat as an offseason emphasis. Along with improving his diet, the Pats’ second-year quarterback confirmed that he worked with throwing coach Tom House. We’ll need to see more live football to glean whether or not it made a difference, but people in the building took notice of Jones’s dedication to his craft this offseason.

Unfortunately, Patriots rookie Tyquan Thornton was limited in today’s session, so we didn’t get to see the rookie in live drills. However, DeVante Parker is acclimating himself quickly into the offense and was heavily involved at receiver. Parker had the play of the day during team drills when he snuck behind New England’s secondary for a long touchdown pass from Brian Hoyer on a deep post pattern. Parker had fresh legs and some legit burst coming off the line in his reps. Based on the way things are going, it shouldn’t surprise anyone if Parker is New England’s starting “X” receiver, not Nelson Agholor or Thornton.

4. Could the Pats Switch to More Shanahan-Style Schemes?

The Patriots’ offense will sound different and look different this year. Pats wideout Kendrick Bourne mentioned “new terminology” with Judge directing things instead of McDaniels. Just a hunch: it wouldn’t shock me if the Pats looked more like the Shanahan-style offensive systems with more outsize zone blocking and bootleg play-action this season. It’s one practice, so let’s file this away as a possibility rather than a fact. But it would simplify things and line up with their major offseason acquisitions in the draft (Strange, Thornton, Strong, etc.).

Strange’s involvement in Monday’s practice was a big indicator that the Pats’ first-rounder could be on the fast track. Strange was selected to fill the void left behind by veterans Shaq Mason and Ted Karras on the interior of the offensive line, so one would expect him to play at left guard. We all saw Strange take in reps with captain David Andrews off to the side when he took a breather. Although Andrews is a career center, he’s a great mentor for Strange and frequently spoke with the Pats rookie.

Although their effectiveness remains to be seen, the best way to categorize New England’s cornerback situation after today is: wide open. It’s not uncommon to see a heavy rotation this time of year since overworking anyone in May is silly. But the Patriots gave reps to a host of corners, including rookie Jack Jones. Along with Strange, Jones was the most involved among the Pats rookie during team drills. If he can prove himself to the coaching staff, Jones is getting an opportunity to play real snaps at outside corner this season. It was also good to see one of the other Jones’s, Jonathan, participate fully in practice after a season-ending shoulder injury in 2021.

In the mix (in no particular order): Jalen Mills, Malcolm Butler, Terrance Mitchell, Jon Jones, Jack Jones, Myles Bryant. Not so much, but saw some reps: Joejuan Williams and Shaun Wade.

7. Don’t Sleep on WR/RB Ty Montgomery As Receiving Back

Another hunch from today’s session: veteran addition Ty Montgomery could have a significant role as a third-down/receiving back. With James White still limited, Montgomery could make an early-impact catching passes out of the backfield, which is a role he played in Green Bay and New Orleans. Although we didn’t see much of the rookie on Monday, Montgomery and White could serve as a bridge to Pierre Strong, who eventually could take on a pass-catching role.

8. Pats Linebackers Raekwon McMillan and Mack Wilson in the Mix

At linebacker, the Patriots are moving on from long-time regulars Dont’a Hightower, Jamie Collins, and Kyle Van Noy this season. McMillan, who missed last season with a torn ACL, picked up where he left off in camp a year ago with some solid flashes in coverage. We also saw new addition, Mack Wilson, while second-year linebacker Cameron McGrone took more mental reps than live ones. It may flip eventually, with McGrone taking on a larger role once he’s caught up after a redshirt rookie season.

9. Nice Zip on the Ball for Rookie QB Bailey Zappe

There isn’t a quarterback competition in Foxboro this summer, so don’t start with that. But Zappe is a fast learner and throws a nice, catchable ball. In those respects, he looks a lot like Jones. Zappe made a few solid timing throws on in-breaking routes and nearly dropped a dime on a slot fade to Malcolm Perry during team drills (broken up at the last second by Myles Bryant). His timing, rhythm, and accuracy were impressive this early in the process.