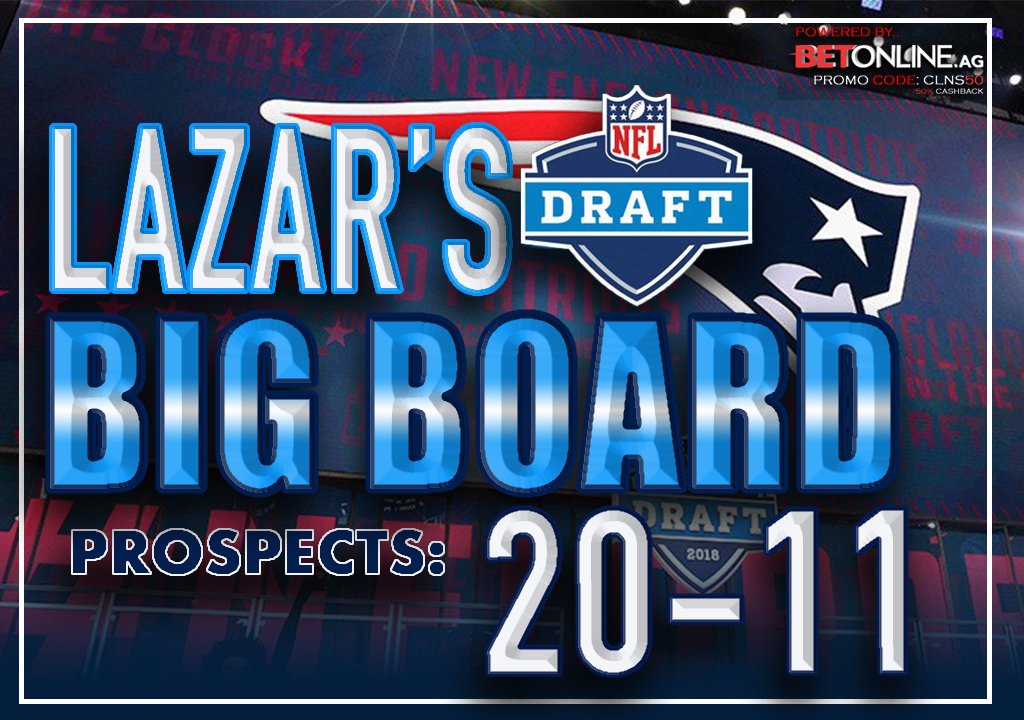 As we continue the countdown to number one, here’s 20-11:

The UMass star is a fascinating case study of how level of competition and playing style can affect a prospects draft status. On tape, and at the combine, Isabella is in the first-round conversation. However, outside of garbage time against Georgia, Isabella shattered FBS receiving records against mediocre defenses last season. He also has a unique skill set given his height (5-8) and weight (188 pounds) as a perimeter receiver that will likely transition into the slot. With that said, Isabella’s 4.31-speed translates into a legitimate deep threat that glides past defensive backs and is a smooth operator on double moves. On horizontal cuts, Isabella needs to be sharper out of his breaks, but he has the necessary explosiveness to create separation. Isabella is more in the mold of Tyreek Hill or Golden Tate than Julian Edelman, but he’s a game-breaker that will threaten secondaries with his speed at the next level.

Allen could be in the conversation for the Patriots at the end of the first round, but if not, he’ll come off the board quickly in the second round. The Boston College star isn’t an elite athlete, but he wins with technique and fundamentals that will make him a high-end starter for years if he stays healthy. Allen has an extensive toolbox of pass rush moves with everything from a punch a dip to a nasty spin move at his disposal. He has heavy hands, diagnoses plays quickly and his motor never stops running. Allen also has tremendous versatility lining up everywhere from over the center to out on the edge. The Patriots love players like Allen that can move around the formation without losing effectiveness.

A three-year captain and one of the nastiest offensive lineman in this class, Risner finishes blocks in the running game like the defender insulted his mother. Risner’s hand usage and strikes are elite, and he’s always balanced and centered on his blocks. Although there’s a slight false step out of his stance, it didn’t affect him much in pass protection as Risner only allowed five quarterback pressures and zero sacks last season. His lateral agility is good enough that with his upper body strength and ability to anchor against power he’s hard to beat. Some project Risner to move inside to guard due to his foot speed, but he’d look good next to Shaq Mason as the right tackle of the future in New England.

An extremely versatile safety that played mostly in the slot last season for the Gators, Garder-Johnson is one of the most improved players in this year’s class. He always had the athleticism and coverage skills, but he made significant strides as a tackler, although he still has room to grow in that regard. The Florida product can play man coverage against slot receivers or tight ends and also has excellent instincts as a deep zone player with the range to morph into a ball hawk when tasked with center field or half field duties. Gardner-Johnson also became a vocal on-field leader of the Gators defense last season and was a tone-setter for that unit. He needs to continue to improve his technique and pursuit angles as a tackler, but he’s got elite traits as a coverage player and could be the next Devin McCourty in New England.

If you’re looking for a center fielder, Adderley is the best safety in this class in that role. Adderley is smooth in his backpedal and has the necessary hip fluidity to open at the top of his drop and out-run the football. As an ace special teamer, Adderley’s aggressions and tackling skills also translate to defense where he’s a physical presence that will chase down ball carriers all over the field. Although he struggled in man coverage at the Senior Bowl, Adderley is a converted cornerback that does have some versatility to cover tight ends. The Delaware star is still learning how to read route combinations and take proper pursuit angles on the backend, but he’s a four-down player that will make an instant impact.

If the Patriots take a guard early, we might lose our collective minds, but Lindstrom is worth the investment. The BC product tested in the 96th percentile at the combine and every bit of that athleticism translates on tape. He’s one of the fastest guards off the ball that I’ve scouted over the last three years and reaches blocks from all angles at an insane pace. His pull blocks and second level blocks on the move are incredible, and he’s got tackle skills as a pass protector with a balanced pass set and quick feet. If you want to nitpick, he isn’t consistent with his pad level and creating leverage points to convert his speed into power. However, Lindstrom is a plug and play starter that will be a crucial piece on your offensive line for a decade.

Brown is my WR7, which is lower than most, but there’s no doubt that he has a high floor. An extremely productive receiver over the last two seasons, Brown has incredibly strong hands and is a polished route runner. He can also stretch the field once he gets rolling and is terrific after the catch. My hesitations with Brown come from his struggles against press coverage and a lack of explosiveness in his routes; he’s not quick out of his breaks nor does he show much burst off the line. However, as a big slot receiver, Brown can use his thick frame to win with body positioning at the top of his routes and is a mismatch up the seam against linebackers and safeties. The potential is there for Brown to take some snaps on the perimeter, but getting him free releases and runways to build up his speed will be critical to his NFL success.

Another highly-productive receiver prospect that has separation concerns, Harry is a very similar evaluation to Brown. As a downfield receiver, Harry has tremendous body control and arm extension to pluck balls outside of his frame in contested catch situations. He’s also a YAC monster as one of the most dynamic players with the ball in his hands in this class, which allows him to be heavily involved in the offense on screens as well as downfield routes. Harry will take most of his reps in the slot, but he’s got some inside-out versatility and would move all around the formation with the Patriots. He’s also one of the best blockers in this class. Harry’s NFL success will depend on his separation skills as he lacks acceleration out of his breaks and doesn’t have the long speed to run by coverage. In the right offense, though, he should be a good pro.

Rapp’s 40 time at his Pro Day (4.70-4.75) forced me to go back to his tape to re-evaluate his play speed, but I still feel the same way about him as I did before his Pro Day. He plays much faster than those reported times, and his instincts are a big reason why as he’s always a step ahead due to his processing speed. Rapp is a chess piece that can play all over the secondary. He’s a high-level man coverage player against tight ends, a dynamite run defender and blitzer in the box and a half-field zone player or robber at the intermediate level. Rapp takes excellent angles to the ball, will click into blocking schemes to mirror ball carriers and never misses a tackle. Rapp might not have the range to play as a center fielder, but he’s a high-impact player near the line of scrimmage.

Harmon is one of those receivers that does all the little things well, which makes up for a below-average athletic profile. He consistently creates passing windows with body positioning and makes terrific adjustments on the ball to work around and through contact. He’s also incredible on double moves and is an excellent perimeter blocker. Harmon isn’t a dynamic route runner, but there’s no wasted movement in his routes, and he understands who he is as a receiver to win in crowds. An accurate quarterback like Tom Brady would put the ball in places where Harmon can use his strong hands and body control to be a productive receiver.