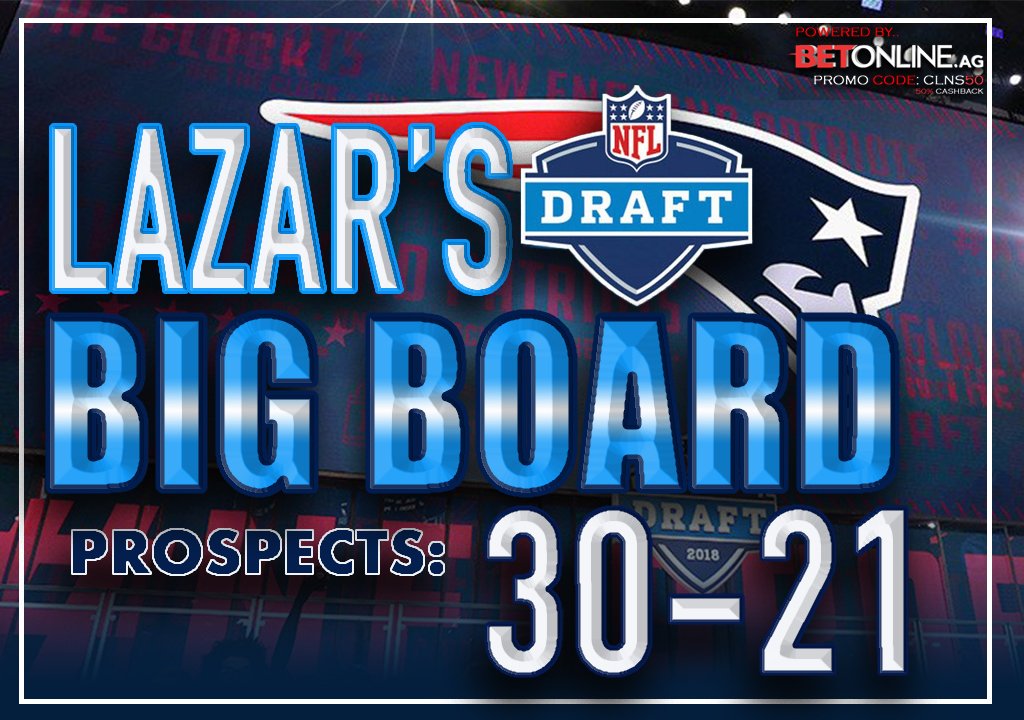 If the Patriots strike out on the top three tight ends in the class, Sternberger is the fourth-best prospect at the position. A highly productive 2018 season gave us a preview of what Sternberger can be when he’s at his best: a big play machine that was always open in the A&M offense. Sternberger had 21 catches of 20 or more yards last season to lead the FBS and averaged over eight yards after the catch. The Texas A&M product is a seam stretcher using his first-step explosiveness and build up speed to run away from the middle of the field defenders. His receiving skills fit the Patriots offense perfectly, but he needs to develop as an in-line blocker.

McLaurin doesn’t check every box for the Patriots, but his prowess as a route runner and four-down ability make him a potential target on day two. McLaurin runs routes from everywhere, has blazing speed (4.35-second 40-yard dash) and quickly creates separation at the line of scrimmage with consistent releases against press coverage. The only box that McLaurin didn’t check for New England in the pre-draft process was a subpar three-cone time of 7.01 seconds in Indy (37th percentile). However, he projects as a complementary receiver and special teams standout at the next level.

Wilson had a rough College Football Playoff, but his skill set offers the Patriots some athletic upside while also possessing the necessary bulk to hold up against the run. Wilson could be a compromise for Belichick at linebacker since we know that he likes size at the position. Although he has the frame to hold up against the run, Wilson is at his best in coverage where he has excellent movement skills and the instincts and ball skills of a safety. The Alabama product was also an ace special teamer for the Crimson Tide. Both Clemson and Oklahoma exposed some of his deficiencies with pursuit angles and positioning, but the talent is there for a high-end starter.

Jones is an explosive interior rusher that projects as a 3-4 defensive end or an inside rusher on passing downs in the Patriots defense. He’s got a great feel for rushing the passer on the interior, similar to Trey Flowers, with an ability to set up rushers with a series of pass rush moves that are unique for trench warfare. He’s also got an excellent first step to shoot gaps, and his backside pursuit speed lets him chase down outside runs. However, Jones lacks the size and power at the point of attack to play on the interior against the run, and often gets pushed off the ball when he’s not making plays in the backfield. We’ll see if the Patriots want to add an interior pass rusher that doesn’t fit their profile as a run defender.

Nelson is a bit of a polarizing prospect, or maybe just a player that’s flying under the radar. Some draft experts have him outside of their top 100, but for the Patriots and me, he’s a natural fit. From a measurables standpoint, Nelson has a similar height and length combination as former Pats defensive end Chandler Jones and Nelson posted a 6.95-second three-cone at the combine (92nd percentile). On tape, he plays with excellent pad level and knows how to use his length to create leverage points to win at the point of attack. Nelson’s short-area quickness shows up on film as well through fluid pass rush moves and a slithering style to slip blocks against the run. Based on his athletic profile and versatility, the Patriots might target Nelson on day two.

Winovich went from a high-motor white guy during the fall to a legitimate NFL athlete after testing in the 72nd percentile at the combine, including a 6.94-second three-cone. The Michigan product doesn’t have the hype of teammate Rashan Gary, but his tape was better than Gary’s last season as one of four edge defenders to have an 85.0-plus grade in both run defense and pass rush according to Pro Football Focus. Along with a never-ending motor, Winovich has a combination of first-step quickness and hand usage that makes him extremely difficult to block. Every coach loves players like Winovich that play with maximum effort but also have refined skills that make them productive players.

Labeled a jump-ball specialist, Arcega-Whiteside is undoubtedly a red zone monster with 18 touchdowns from inside the 20 in the last two seasons. However, there’s more to his game than size and boxing out defenders as Arcega-Whiteside uses a series of route releases against press coverage to create instant separation at the line of scrimmage. He also shows an advanced ability to adjust his routes based on types of coverage and alignments from defensive backs. Arcega-Whiteside has above-average speed given his size (6-2, 225 pounds) but he’s not going to separate with speed or quickness at the next level. His skill set of size and nuanced routes will do just fine, though.

Out of all the receivers on my board, Boykin checks the most boxes for the Patriots based on their draft history at the position. That’s not hard to do from an athletic standpoint as Boykin checks everyone’s boxes testing in the 99th percentile at the combine. Boykin’s tape is inconsistent, partially due to his quarterback play, but his athleticism did translate. At his best, Boykin wins at the catch point in contested catch situations by boxing out defenders and playing above the rim. He’s also underrated at the line of scrimmage using his quickness and upper body strength and hand usage to beat jams. Boykin will need to put it all together at the next level, but all of the traits are there for NFL production.

There aren’t very many players that fit the Patriots mold better than David Long in this draft, and that’s why he’s one of two cornerbacks that made my board. Long is slightly undersized, but he’s a strappy press-man corner that plays like Malcolm Butler and JC Jackson. Long is very patient at the line of scrimmage to wait out route releases with the foot speed to then mirror and match in man coverage. He lives in receivers’ hip pockets and has the athleticism to follow them all over the formation. Particularly of note, Long posted the fourth-best three-cone time ever recorded at the combine (6.45-seconds, since 2003), and we know the Pats took notice. The Patriots might not need a cornerback, but Long is a perfect fit in the system.

Omenihu is a late bloomer, but he began to put it together last season with 9.5 sacks and 18 tackles for loss. The Texas product has a rare blend of power, athleticism and length that with some refinement could lead to a very productive player in the NFL. Omenihu won mostly with his length and punching power in college, which is a nice base to build off of, but he needs to develop a pass rush plan and keep his pads down consistently. For the Patriots, Omenihu has tremendous versatility to play anywhere along the defensive line and the physical traits to be a prolific two-gapper against the run.