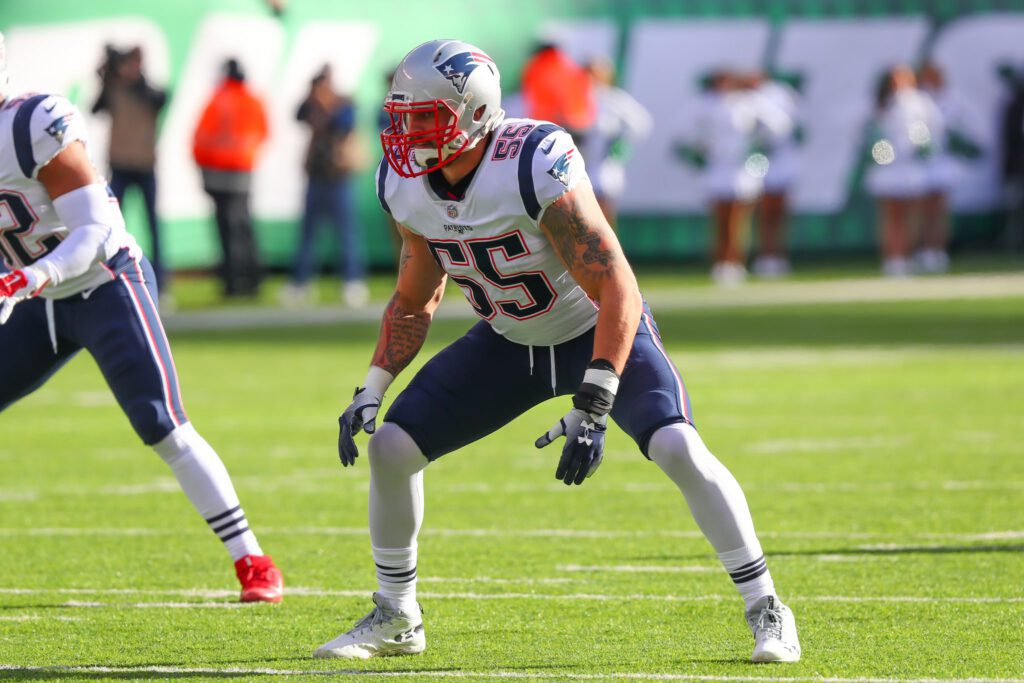 FOXBOROUGH — Over the years the Patriots have made a habit out of acquiring veteran players to bolster the roster during the season.

This season, there are plenty of examples, but one signing that has flown under the radar is outside linebacker John Simon.

Simon was released by the Indianapolis Colts in their final wave of roster cutdowns back in September as the Chuck Pagano holdover didn’t fit in new defensive coordinator Matt Eberflus’s 4-3 scheme.

“It was a rough time for myself and my family going through that, but that’s part of the business, and that’s something you have to expect, and you just roll with it,” Simon said reflecting on an unfortunate ending in Indianapolis.

Simon said he spent the three weeks in between his release from the Colts and signing with the Patriots, “working out a lot, upset most of the time. That’s part of the deal. I had some workouts with other teams and just trying to stay ready and if any team wanted to sign me just be ready to contribute right away and help that team win a game.”

Simon also had an interesting perspective on using his release from the Colts as motivation for the rest of the season.

“If you need motivation at this point in your career then you’re in the wrong business,” he said in the Patriots’ locker room on Friday. “I think you should always be motivated. I tried to stay in shape as much as I could so when the time came I was ready to help a team win games.”

In late September, Simon worked out for the Patriots and impressed enough to sign with New England on September 26.

The veteran linebacker reportedly worked out for the Jets and Patriots, but the chance at his first Lombardi Trophy drew him to New England when Bill Belichick came calling.

“The winning culture was something I wanted to be a part of, and I think a good fit for me,” he said. “I came in and had a workout. Thought I had a decent workout and apparently so did they, so I was fortunate to sign here and contribute.”

As far as the Patriots coaches go, both Belichick and de facto defensive coordinator Brian Flores raved about the addition of Simon on this week’s conference calls after the 28-year-old had a sack, three quarterback pressures, and a run stop in the Patriots’ loss to the Dolphins.

“John’s done a really good job for us since he’s come in here and has picked things up very quickly, contributed for us right away defensively and in the kicking game. He’s really done a solid job,” Belichick told me.

“He’s experienced, smart and has very good football instincts. He’s got good awareness. Even though he hasn’t had as much experience in our system as some other people have, his instinctiveness to kind of just do the right thing on the football field at the right time consistently keeps showing up. He’s been a great addition. I’m glad we have him.”

Simon’s fourth-quarter sack of Dolphins quarterback Ryan Tannehill was a great example of Belichick’s observations about the veterans smarts and football instincts.

On the sack, the Dolphins ran play-action off of an outside zone blocking scheme with Tannehill running a bootleg off of the play fake. The idea here is for the misdirection to hold the backside edge player. However, Simon reads the play perfectly and sees Tannehill keep the ball. Simon goes right for the Dolphins quarterback, and gets the Patriots off the field on third and one.

Flores marveled at Simon’s versatile skill set and the energy that he brings to the Patriots defense.

“John’s been really a great addition to our team, obviously played real well last week. He’s really developed and grown over the course of the season,” Flores said. “He’s got a great skill set, does a good job with his pass rush, does a good job setting the edge, plays with good speed, good energy. He’s really done a good job of just bringing energy to the team. He’s been a solid contributor to the team, and we’re happy to have him.”

“I think that’s just how I play football,” Simon said of his energetic approach. “I just try to go out there and have a physical brand to my name. Anything the team asks me to do that’s what I try to do on a daily basis. I pride myself on being versatile, and we have a lot of guys of that sort on this team.”

Simon has proven to be a very versatile player as is his calling-card according to his coaches and the man himself.

In eight games with the Patriots, he has lined up at both on-the-ball and off-the-ball linebacker and has contributed on five different special teams units.

Beyond his scheme fit, Simon also had some familiarity with the Patriots’ system after spending three seasons in Houston with former New England defensive coordinator Romeo Crennel and linebacker Mike Vrabel (now head coach of the Titans).

Crennel was the Patriots’ defensive coordinator in their first three Super Bowl victories and Vrabel, of course, starred as a player for the Patriots in the early part of the dynasty.

“There are some similarities, there’s a lot of differences too, but I think it definitely helped,” Simon said of his time in Houston. “Him [Crennel] being in this system and running this system before some of the vocabulary words carried over, so it made the transition a little smoother.”

Along with the coaches in Houston, Simon also played for former Pats DC Dean Peas in Baltimore and one of Bill Belichick’s friends in the college ranks in Urban Meyer at Ohio State.

The Ravens drafted Simon in the fourth round out of Ohio State in the 2013 NFL Draft, and he was a senior during Meyer’s first year at the helm of the Buckeyes.

Ohio State finished with a perfect 12-0 record that season and the now Pats linebacker had nine sacks and 14.5 tackles for loss.

Due to a Bowl ban from the previous regime, Ohio State wasn’t eligible for a bowl game that season.

“No, I think they’re different,” Simon said of Belichick and Meyer. “That’s not to say one is better than the other by any means, but they both have their styles, and they both get the most out of their players.”

In the 2017 offseason, Simon was an under-the-radar free agent that had the potential to thrive with an increased role.

After all, he was behind pass-rushers J.J. Watt, Jadeveon Clowney and Whitney Mercilus in the Texans defense and still notched 26 quarterback pressures in only 205 pass-rushing snaps.

As a result, the Patriots seemed like a potential fit as they’re often in on underappreciated players that they can get below market value.

The Patriots and Simon weren’t a match then, “all I know is they talked to me this time around,” Simon said with a smile when asked if New England showed interest in him in free agency a year ago.

But both Simon and the Patriots appear to be happy that he found his way to Foxborough eventually.